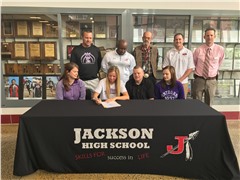 For many athletes when they head to the college ranks they only do so to play in one sport, but this is not the case for Jackson senior Rylee Stafford.

Stafford did not begin her college search until this summer, but she was still able to find the university of her choice in Fontbonne located in St. Louis.

Stafford officially signed with Fontbonne on Thursday, April 27, to be a dual-sport athlete where she will play basketball in the winter and soccer in the spring.

This is what Stafford has done all four years at Jackson, but going into college she was not sure which sport she wanted to play since she thought she would have to choose between the two.

“I participated in camps and stuff over the summer, but Fontbonne showed interest in me in October, so then I went on a visit,” Stafford said. “I wasn’t sure at first, but I ended up falling in love with [the university].

“That was for basketball, and then over the soccer season the soccer coach contacted me and wanted to recruit me for soccer as well so I ended up getting to do both.”

Stafford knows this will be a daunting task, but she is fully prepared to take on all of the responsibilities thrown her way.

“I’m definitely going to be really busy — I’m sure I’m going to have a lot of late nights, but I don’t get to play sports forever,” Stafford said. “The fact that I get to do both for four more years is just incredible to me.”

In her final season with Jackson’s girls basketball team, Stafford averaged a team-high 13.5 points per game and helped lead the Indians to a Class 5 District 1 title and an overall record of 23-7.

Stafford also led Jackson in 3-pointers with an average of 2.5 threes made per game and had a 43-percent completion percentage. She was named to the All-District and All-Conference teams after the season.

Stafford is a defender for Jackson’s soccer team in the spring, which she has helped have nine shutouts in the team’s 16 games so far this season.

“[For college] I’ll have to go in [the gym] and shoot [shots] more than I ever did in high school — I know that,” Stafford said. “I’ll have to dedicate a lot of my mornings and afternoons to working out — over the summer I’m going to be super busy working out. But I’m ready — I’m ready to lift.”

Stafford is certainly looking forward to being able to compete and bring her teams success, but she cannot wait to make memories with her new teammates and also get a degree in graphic design.

“I actually didn’t want to do graphic design until this year,” Stafford said. “I took Desktop Publishing and I enjoyed it. We made fliers and pamphlets and brochures, and I liked the creative aspect of it. So, I just looked into the program at Fontbonne, and that’s what I want to do.”