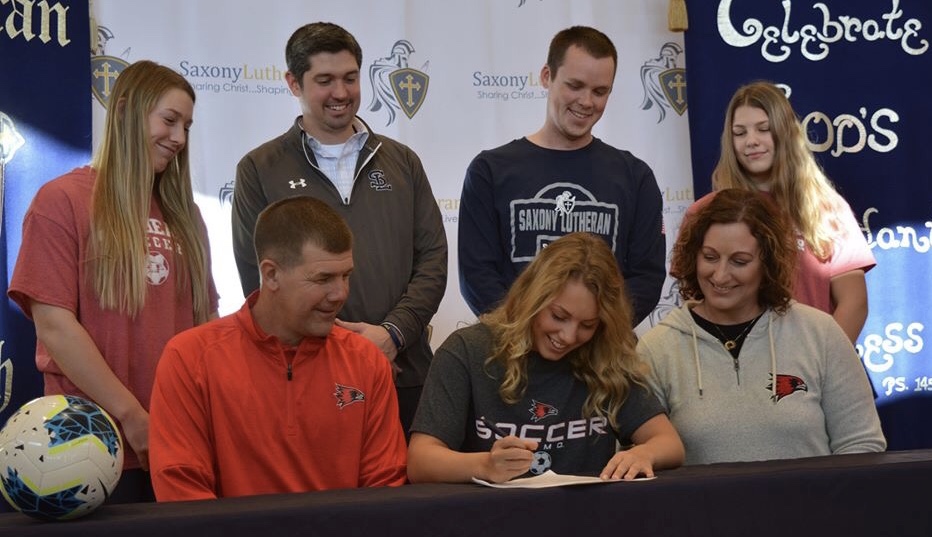 There have not been many years in Emma Brune’s life when she did not have some sort of connection to the Southeast Missouri State soccer team, so it made sense when the Saxony Lutheran dual-sport senior signed her national letter of intent with the program last week.

Brune became SEMO soccer’s ball girl when she was eight years old and even held that position for a few years. She then became a member of the Southeast Missouri Soccer Club in third grade, a team coached by SEMO coaches Heather and Paul Nelson.

“Ever since I was a little kid I always wanted to go to [SEMO],” Brune said. “I grew up going to all the games, and a lot of my family has played there. I was at Heather and Paul’s house all the time when I was younger, so I know them really well, and they are awesome coaches. I’m really excited to finally play for them again.”

Heather Nelson was named the Ohio Valley Conference Coach of the Year for the fifth time this past season. This was after the Redhawks finished 11-5-1 overall and won the OVC Regular Season Championship for the first time since 2014.

About 75 people were in attendance for Brune’s signing, and she was shocked by how many members of her family and friends actually showed up.

“It was crazy — I was not expecting this much,” Brune said. “I have a lot of support from my family and friends. [Having this many people here] means a lot especially since I’m playing close to home. They’re all going to be there, too.”

Brune signed with SEMO following arguably the first three most successful seasons in Missouri high school girls soccer history by an individual. In the span, Brune combined for 227 points with 90 goals and 47 assists while being named the Class 1 Player of the Year three times, which no player in any Class has ever accomplished.

“Emma is a strong and versatile player,” Coach Nelson said. “She is an unselfish teammate and goal scorer with an excellent first touch, good field vision and quick feet. We are incredibly excited to have Emma choose to stay home and wear a Redhawks jersey.”

At SEMO, Brune will also be joining a former SEMO Soccer Club teammate in Megan Heisserer, who scored 10 points with four goals and two assists in her freshman campaign. Heisserer played high school soccer for Cape Notre Dame, where she won two Class 2 State Championships and was named the C2 Player of the Year twice.

Brune will be teammates with another familiar face in Lauren Welker, who has started in 19 games in her first two years for the Redhawks. Welker was a three-time Class 4 All-State recipient at Jackson and helped lead the program to its first trip to the final four her senior year.

“I’m really good friends with them, so I’m really excited to play with them again,” Brune said. “They’re both really good, so I always hated playing against them. I’m glad that I’ll finally be playing with them.”

Another new teammate of Brune’s next year will be the OVC Freshman of the Year Hailey Block, who recorded a team-high 18 points with eight goals and two assists. With Block and Heisserer making significant impacts as just freshman, it motivates Brune to do the same in her first season with the Red-hawks next fall.

Saxony Lutheran’s girls soccer head coach Chris Crawford described Brune as not only extremely talented, but also as a work horse who is as good as she is because of her work ethic.

“I know that she won’t be playing in the position that she plays for us, but I have no doubt that she’s going to be an impact player for [SEMO],” Coach Crawford said. “She is extremely soccer intelligent, and she is big and physical. Her speed is not her biggest attribute, but she’s fast enough to compete, and she’s smart enough that she’ll be in the right position. She’s a hellacious tackler — there’s very few tackles she goes into that she doesn’t win. If she doesn’t win it, she’s probably getting fouled, so they’re getting a complete package.”

Another benefit for Brune heading into college soccer will have been learning from and training with an All-Sun Belt player from Troy, which happens to be her older sister Maddie. Maddie was a three-time captain for Troy and scored 10 points [three goals, four assists] in her final season as a Trojan.

“[Maddie] killed it this season,” Brune said. “She did really well, so I really look up to her, and she helps me out a lot. Having her here was the main reason why I waited to have my signing because she’s one of my biggest supporters.”

Brune has one more season of high school soccer left before college, and one of her goals will be to win a district championship. The Crusaders have fallen in the district title game the last three years to St. Vincent, which went on to win the Class 1 state title in 2017 and 2018.

“[Emma] is a generational talent at the high school level,” Coach Crawford said. “We’ve had a few of those recently, but she can see things that we don’t see from the sideline because she’s in the middle of it. She has a feel for the game, and we can bounce things off her as coaches.”

Over the years, Coach Crawford has noticed a significant growth in Brune’s vision and confidence on the field. There was one point during Brune’s sophomore year when Crawford had to explain to her even though she didn’t score four goals in a game, their team still won the contest.

“It’s a belief in herself, and that makes a big difference for her,” Coach Crawford said. “Coaches always talk about how you don’t want to drag kids off the practice field. I’ve had to tell her a few times, ‘You need to give your body a rest.’ It’s been a pleasure to coach her and get another 12 weeks with her.”

Brune has mainly focused on her conditioning heading into her senior year along with her foot skills and shooting. Brune also spends a tremendous amount of her time off in the weight room as she also prepared for her final season-ever of basketball.

Brune, who has been named all-state each season in soccer, was named all-state in basketball last season for the first time, and she is currently averaging 24 points per game for the Crusaders. Right now Brune is second on the program’s all-time scoring list and is on track to break Brianna Mueller’s record of 1,819 points.

Brune said she doesn’t know why she decided to play soccer over basketball in college, but she is actually looking forward to only having to focus on one sport.

“I’m really excited about that,” Brune said. “I’ve loved basketball, but my body — it’s definitely going to help me only having one sport.”

What Brune enjoys and will miss the most about playing high school sports is how much fun she has with her teammates and coaches. Brune will also miss being coached by Crawford among others like her basketball head coach Sam Sides, who has helped her grow as both an athlete and person.