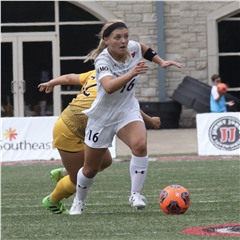 SEMO was up against Southern Miss as Heisserer helped give her team
the lead twice in the second half for a 3-2 win. The game was tied 1-1 heading
into the 64th minute when Heisserer booted the ball off a cross pass from
senior midfielder Esmie Gonzalez into the goal for her first score as a
Redhawk.

“That was a roller coaster of emotions,” Heisserer said following
the match. “It was really exciting, but it was like the perfect build up. I was
just there and Esmie played an amazing ball in, so it felt really good.”

Heisserer and Gonzalez came out of the game following the score,
but the Golden Eagles weren’t going to allow SEMO to take things easy the rest
of the match. Nearly 10 minutes later, Southern Miss answered on a penalty kick
to tie the game back up 2-2.

Heisserer was understandably frustrated when the game was tied
again, but the best way to handle that adversity was to believe her and her
teammates were going to score the next goal.

Heisserer and Gonzalez re-entered the match, and that is exactly
what happened seven minutes later. Gonzalez took the ball down field and passed
it to Heisserer, who then passed the ball back for Gonzalez to score from
nearly 20 yards out.

“Her shot was awesome,” Heisserer said. “I saw it going over the
keeper, and I was like, ‘Oh that is in.’”

The Redhawks were able to keep Southern Miss scoreless for the
final 10 minutes for SEMO to start the 2019 season 1-0 overall after going 3-0
in exhibition play.

“[Southern Miss] is a very talented team with a high [rating
percentage index], so we were really looking forward to playing this game,”
SEMO’s 20-year head coach Heather Nelson said. “We scored three goals against a
very good opponent, and I felt like every time they evened the score we dug a
little deeper.”

Nelson has seen thousands of soccer players in her years as a coach
while on top of her duties at SEMO, she also coaches the Southeast Missouri
Soccer Club. This is where Nelson first started coaching Heisserer back when
Megan was only in the third grade.

“I’m glad we had a game at home in exhibition because I think
[Heisserer] had the weight of the world on her shoulders in that first game,”
Nelson said. “A lot of people think of how exciting it is to play at home, but
at the same time there’s a lot of pressure on her to play at home.

“There’s a lot of expectations based on her high school
performances and even state performances. It’s nice to see her starting to
settle in to take a little bit of that emotion out of it and be more process
oriented.”

Heisserer only registered nine minutes against Memphis at Houck
Field on Aug. 10, but she was able to score a goal and record an assist in
SEMO’s next exhibition against Missouri State.

Compared to high school, Heisserer admits playing at the college
level is a lot harder since every player she faces now is faster and stronger.

On top of winning two state titles at Notre Dame, Heisserer was
also named the Class 2 Player of the Year twice and was a four-time all-state
selection. She finished her career as the Bulldogs all-time leading scorer with
a total of 378 points (156 goals, 66 assists).

“For me it’s really neat because I’ve watched those kids grow up in
this community,” Coach Nelson said. “At a young age, we’re able to help ensure
they have fundamentals in place and help them get a passion for the game you
hope will continue to burn. [Megan] has been in other people’s hands in most
recent years, and I couldn’t be more excited because they’ve been doing the
right things with her since then.”

Heisserer said SEMO feels like home to her because she grew up
watching this team play at Houck Field like she has already been able to do
twice now. “Being able to finally wear the uniform means a lot to me,”
Heisserer said.

Heisserer admitted playing in the fall is weird compared to suiting
up every spring at Notre Dame, which didn’t allow her to really have a break this summer between seasons.
Heisserer said she’s fine with that, though, because she’s doing what she loves
the most.

Coach Nelson attributes her team’s success to the depth this year’s
squad possesses at every position.

“Whoever starts on the day and whoever is coming off the bench is
as tight as it’s been,” Nelson said. “Maybe in the history of the program here,
so for me this season we certainly have the skill set. Now it’s making sure we
continue to live by our core values, which is merit.”