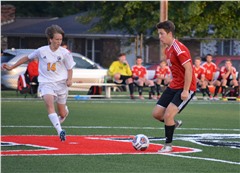 Last season, the Jackson boys soccer team fell to Seckman in the regular season but then defeated the Jaguars to win a second-straight Class 4 District 1 title.

The Indians had no problems with Seckman last Wednesday at home as they scored five goals in the first half.

“You could tell we were in sync — we were on the same page and made a lot of good runs off of each other, which led to a lot of opportunities,” Jackson Head Coach Zach Walton said. “Tonight those opportunities go in the back of the net for us. Some nights they don’t, some nights they do. I thought we really played unselfish all night.”

Five different players scored a goal for Jackson as senior Colten Seyer started the blowout with the game’s first goal in the seventh minute off a pass from freshman Chalon Domian.

It only took four minutes for the Indians to find the back of the net once again as Domian, who had a shot on goal in the ninth minute, scored a goal of his own in the 11th. This was after fellow freshman Wil Essner lured Seckman’s goalkeeper out of the net and then passed the ball to Domian for Jackson to take a 2-0 lead.

The next goal for the Indians came in the 22nd minute off a penalty kick. Sophomore Jake Sauerbrunn came up with the score as Domian lined up next to him to keep defenders away from defending the net.

Domian nearly came up with another goal of his own three minutes later. Two minutes later, Sauerbrunn got another shot on goal as well.

It wasn’t until the next minute in the 28th minute of regulation when Jackson came up with another goal as Essner was successful on an unassisted play to give the Indians a 4-0 lead.

“[The underclassmen] are some very talented and very technical players that play up top for us — it’s what we needed,” Coach Walton said. “As far as the seniors go, they knew we needed somebody like that.

“I feel like we have some really good defenders, and we’ve got some good midfielders out there, so we just needing somebody to gel with us to be that goal scorer and that technical player for us.”

Scoring the final goal for the Indians was junior Zavier Heinley, who was able to get a one-on-one matchup with the goalie to give his team the 5-0 lead in the 36th minute.

No goals were scored in the final 40 minutes as Jackson was able to play keep away while also holding the Jaguars to just a few shots on goal.

Defensively, the Indians are led by seniors Caleb Dameron, Seth Essner and Kaleb Irby. Senior Logan Gier is currently out with an injury.

At goalkeeper, sophomore Luke Mirly recorded his sixth shutout of the season.

Jackson suffered its first loss of the season Saturday on the road in a 4-1 defeat to Rockwood Summit, which Coach Walton knew heading into the match would be a test for his team.

“Rockwood Summit is good year in and year out every year,” Walton said. “I guarantee you they’re going to be a top team.”

Earlier this season on Sept. 1, the Indians were able to win the Cape Notre Dame Soccerfest for a third-straight year as they defeated the Bulldogs 1-0 in the championship game.

Jackson did not allow one goal in the tournament as it started out with a 3-0 win over Sikeston and a 2-0 win against Cape Central in the semifinals.

“It’s nice to win that Notre Dame tournament again — that’s one of our goals is to come out and play well at the beginning of the year,” Coach Walton said. “Our boys did well and gave us an opportunity to put us in that championship situation. I was proud of them.”