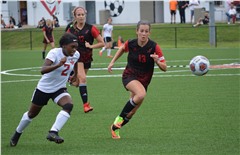 The Jackson girls soccer team recorded its 14th shutout of the year with a 4-0 win over SEMO Conference opponent Sikeston to conclude the regular season last week at home.

With this win Jackson advances to 14-2 overall, which happens to be the program’s best regular-season record since 2015 when the Indians went 18-2-1. Jackson eventually fell in the Class 4 Sectionals that year, but this year’s team hopes it can make a return to the Final Four.

“I think today was a day we wanted to get some people in different positions, but certainly I think we’re going to be in good shape for next week as far as getting ready for the district tournament,” Jackson head coach Justin McMullen said. “I’m looking forward to Monday.”

The Indians will rely heavily on their defense to return to Kansas City, which has only allowed a total of five goals this season. The record for the least amount of goals allowed in program history is seven.

“I’m going to give a lot of credit to Coach [Caleb] Beussink, who works one-on-one with our back line,” Coach McMullen said. “He does a really good job throughout the game in making sure they’re in the right positions. The girls really respect the way he coaches them, but the girls have done a really good job overall as far as being connected at back. Anytime you can play 17 games and only allow five goals — that’s saying something about your defense.”

Jackson senior mid defenders Laura Bertrand, Taylor Nelson and senior goalkeeper Emily Hermann were able to get much needed rest against the Bulldogs and were on the bench or playing at different positions by the end of the game. This was beneficial after suffering an overtime loss to Mehlville the day before on the road.

Bertrand and Hermann were able to see time on offense as Bertrand was able to score the final goal of the game and her second of the season with 32 minutes left in the match.

“It was good to get Laura a goal right there,” McMullen said. “As soon as she scored she said, ‘Am I coming out already?’ It was good — we allowed them to have some fun, and we even got Emily Hermann to play a little forward. Tonight, we definitely tried to get them relaxed, but at the same time having some fun and realizing that’s why they’re playing the game to begin with.”

Scoring a game-high two goals, which were also her first two goals of the season, was sophomore Olivia Ward. She scored her first goal with a headshot off a corner kick from fellow sophomore Kate Emmendorfer in the eighth minute.

“Kate has always been able to take those, and we’ve started to have her take them a little bit more often the last couple of weeks,” Coach McMullen said. “We feel really confident in how she can put the ball in on corner kicks. She served a great ball to [Ward] and put it right where it needed to be.”

Ward’s second and final goal of the contest came 11 minutes later when she was able to find an open lane to the goal to put Jackson up 3-0 over Sikeston with 21 minutes left in the first half.

“Liv has been playing really well the last several weeks, so it’s good to see her reward herself for the hard work that she’s been doing out there,” Coach McMullen said. “The corner kick goal — we’ve been talking about her to get up and head the ball. She’s 5-foot-10, so she’ll be winning lots of those balls. I teased her when she came off, but that was good to see.”

The Indians fourth goal of the contest came from one of their starting forwards in sophomore Katelyn Miller, who scored her 13th goal of the season after an assist from senior Mikala Liley.

The assist was Liley’s 13th this year, which is the team high and also a new career-high for the senior who earned all-state accolades with 12 assists and 17 goals in 2018. Liley has scored 18 goals thus far.

Katelyn and her sister senior Natalie Miller played for most of the match, whether it was on defense or even back at goalkeeper where Natalie saw action the last few minutes.

Natalie has recorded a team-high 21 goals this season along with eight assists, and she is three goals away from breaking her career high of 23 set last year. She also earned all-state honors along with Liley as the two will be crucial on the road to state.

Jackson also did not allow a shot on goal for the majority of the match and was able to keep possession of the ball with substitute players.

The Indians have officially been seeded first in this year’s Class 4 District 1 Tournament for the first time since 2016. Jackson hopes to win the tournament for a third-straight year after already playing all three teams in the district this season.

“[Districts] is a different ball game — we’re going to see different things from whomever it may be and definitely on Monday,” Coach McMullen said. “Anything can happen come playoff time. We’ve been in situations before where we’ve done well in the regular season and be unfortunate in the post-season. We’re going to make that a point of emphasis this week and make sure we’re ready to go.”