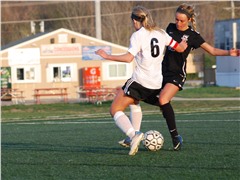 Following two-straight games on the road in St. Louis, the Jackson girls soccer team (7-1) received plenty of rest thanks to the team’s game at Cape Notre Dame on April 3 getting canceled.

The Indians had a total of five days with no game until they faced Class 3 opponent Union (6-3) on Friday, April 7, at home.

In the team’s road games in St. Louis, Jackson suffered its first loss of the season by allowing a season-high three goals to Westminster Christian Academy in a 3-1 loss.

The Indians bounced back the next day to defeat out-of-state opponent Belleville West [Illinois] handedly by a score
of 4-0.

Scoring two of those goals for the Indians against Belleville West was sophomore Natalie Miller, who is currently tied for leading Jackson in goals with 11.

To start Jackson’s game against Union, Miller had three shots on goal in the first five minutes, scoring on her second attempt in the fourth minute of the game.

“I tell you what, the first goal she did score was a quality finish — that was a pretty good shot,” head coach Justin McMullen said. “I don’t know many goalkeepers that would have saved that one. Natalie was in a zone tonight, but overall this team is well balanced.”

Miller nearly scored a little over a minute later once again, but the ball was saved by Union’s goalkeeper.

Another eight minutes went by after that attempt until Jackson scored its second goal of the game, which was put in by junior Lauren Welker with a shot from the far left side of the field after eluding a Union defender.

Heading into the game against Union, Welker led Jackson in goals with 10. Welker only scored one goal against the Wildcats, which allowed for Miller to tie her for the team high in the second half.

Five minutes later following Welker’s only goal of the game is when Jackson took a 3-0 lead over Union when junior Grace Pehle scored an unassisted goal in the 18th minute of the game.

Jackson maintained possession of the ball throughout the game with aggressive ball play as well as a strong defensive effort from senior Rylee Stafford and company.

Union did not have a shot on goal until the 39th minute of the game, which was securely caught by senior goalkeeper Sam Schnicker.

Jackson’s game against Notre Dame that was originally scheduled for last week for the Noon Optimist Tournament Championship was moved to Monday, April 24.

This weekend, the Indians will compete in the Kickapoo Tournament on Friday and Saturday. Jackson then gets a taste of Class 4 District 1 play when it goes on the road to face Seckman April 19 and then hosts Poplar Bluff the next day.