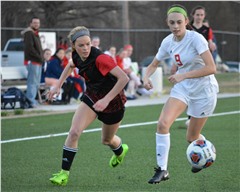 After losing its first game of the season on April 1, the Jackson girls soccer team has yet to allow a goal and is currently on a six-game winning streak.

The Indians (10-1) played their second home game of the year last Tuesday night, and they came away with a 3-0 win over Fox.

“The last several matches we’ve played really, really well defensively, and our offense has kind of fed off of that,” Jackson head coach Justin McMullen said. “We played three tough, intense matches over the weekend, and tonight was another defensive effort that was just tremendous at the back. I thought tonight was one of those games where we easily could’ve come out flat, but I thought we did a really good job of picking each other up.”

Leading Jackson’s defensive backfield is senior mid defenders Laura Bertrand and Taylor Nelson, who signed with Lindenwood prior to the season. On the outside is senior Taylor Tripp along with junior transfer Cameron Pieper.

“They don’t want a team to score,” Coach McMullen said. “They’ll put their face or any part of their body to keep the ball from going in the back of the net. There are so many blocked shots throughout the midfield, but the back line when it gets close they buckle down and pin teams down. They don’t allow a lot of clear shots on goal, and we’ve been really fortunate all year for that.”

Behind these defenders is senior goalkeeper Emily Hermann, who has only allowed four goals through 11 games. With one more shutout, the Indians will have set the new program record for most consecutive shutouts.

Pieper quite literally put her face in front of the ball when she took a shot that left her nose crooked in the first 15 minutes and was forced to watch the rest of the game from the sideline.

“She’s a tough kid — she’s been battling some injuries, and she just told me [after the game], ‘Coach, I’ll be ready to go for the next game,’” McMullen said. “We’ve got the injury bug just a little bit, but we’ve got a tough team. We have some kids fill positions, and we don’t skip a beat. Our training staff does a great job of keeping our kids healthy.”

Scoring a game-high two goals was none other than senior Natalie Miller, who produced the first goal of the game off a cross pass from fellow senior Mikala Liley in the 11th minute. Miller scored her second and final goal of the game off another assist from Liley two minutes after halftime.

“You look for the [opposing] coach to make some adjustments at halftime, and one thing we told [our players] is we needed to come out and be ready for their adjustments,” Coach McMullen said. “The best thing you can do is score in the first two minutes and kind of knock that momentum from the other team down.”

Miller currently leads Jackson in goals with 14 and has also dished out five assists. Miller is 10 goals away from breaking her career-high of 23 she scored in 24 matches last season.

Natalie’s younger sister sophomore Katelyn Miller scored the Indians second goal of the game off a head shot, which bounced into the goal during the 36th minute. She is currently the team’s second leader in assists with seven and has also scored seven goals on top of that.

Liley leads Jackson in assists with eight thus far, and she is currently second in goals scored behind Natalie with 10. Liley scored 17 goals and had 12 assists en route to earning all-state one season ago.

“We have a lot of unselfishness with this team this year, and she just doesn’t care [who scores],” McMullen said. “She’ll tell you, ‘As long as we win that’s all that matters.’ She’s done a great job of facilitating things through the middle there.”

Three of the past Indians wins came in the annual Kickapoo Tournament, where Jackson was able to win its pool by defeating host Kickapoo 4-0, Hickman 1-0 and finally last year’s Class 3 runner-up Incarnate Word Academy 4-0.

“We knew we were going to get good competition, but at the end of the day, we wanted them to know how good we could be,” Coach McMullen said. “I think we proved to ourselves [how good we are].”