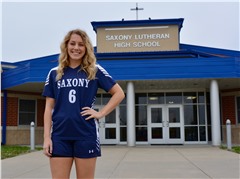 As a dual-sport athlete, Saxony Lutheran senior Emma Brune has accomplished many things as a member of the Crusaders girls basketball and soccer programs since 2016.

Brune has been named all-state in both sports while being Missouri high school girls soccer’s only three-time player of the year, which began 35 years ago. Brune has helped lead the basketball program win four district and four sectional championships, but she has yet to hold up a postseason plaque as a member of the soccer team.

When she was in eighth grade, Brune watched her older sister Maddie win the Class 1 State Championship with Saxony as she was also named the Class 1 Player of the Year — the same accolade Emma has come away with the last three seasons.

One of Brune’s goals for her final season of high school soccer is to win a district title and hopefully reach the final four, but she tries not to think too much about that.

“I try not to put a lot of pressure on myself because I don’t play the best when I have a lot of pressure,” Brune said. “One of my main goals this year is to not have any regrets, so I’m focused on just playing the best that I can.”

However, winning titles and avenging losses against St. Vincent in the past three district final matches is something that is on Brune’s mind whenever she works out, which is quite often. The Crusaders fell to St. Vincent 4-3 in overtime last year in a game where Brune recorded a hat trick.

“When I work out, I always think about it’s the last year playing St. Vincent and just wanting to win so bad this year,” Brune said.

Being touted as one of the best soccer players in the state has certainly made opposing teams want to pressure Brune as much as possible, but the Southeast Missouri State signee has still been able to record 90 goals and 47 assists for a total of 227 points in her career.

Along with being Saxony’s leading goal scorer, Brune has also recorded at least 13 assists each season. Brune enjoys dishing out assists because of the boost it gives her teammates when they score a goal of their own.

One of Brune’s favorite ways to score a goal is on through balls, which is where one of her teammates sends the ball through defenders while she sprints to the ball and receives the pass in open space. Brune also simply enjoys taking on defenders and beating them one-on-one to have an easy shot on the goal.

On the soccer field and basketball court, Brune has had to deal with facing many double and even triple teams, but one of the things she takes pride in the most about herself is her toughness. Brune was able to become the basketball team’s all-time leading scorer this winter and finished her career as the record holder in 13 other categories.

Heading into high school, basketball was actually Brune’s favorite sport, but one of the main reasons why soccer is now her top passion is because of how physical the game is.

“I’m a super physical person, so that’s one of my favorite parts of the game — it’s definitely taken a toll on my body, but I’m used to it,” Brune said.

Brune explained she has an easier time overcoming multiple defenders on the soccer field because she has more room to work with, and plus she has been experiencing double teams for the past two years. This has made Brune become quicker on her feet, but she also credits her success to working with her sister Maddie, who recently finished her college soccer career at Troy this fall.

“In my workouts, I’ll have my sister Maddie come out, and she is like going against two defenders that I’m playing in high school,” Brune said. “Just having her really helps me out a lot.”

Saxony’s girls soccer head coach Chris Crawford described Brune as one of the top tacklers he has ever worked with, and Emma also gives credit to Maddie since she’s always had to figure out a way to take the ball from her older sister.

On top of winning a state title and being a former player of the year in high school, Maddie was a three-time team captain for Troy and earned All-Sun Belt Conference honors as a senior.

“[Maddie] has definitely gone through a lot in her soccer career, so just watching that and learning from her has been huge for me,” Brune said. “It’s helped me out a lot, so I know what to do in different situations.

“She’s one of the hardest workers I know just not in soccer, but in school. She works hard in everything she does, so just by looking up to her, I want to be the same.”

Emma and Maddie also have a similar future Crusader looking up to them in their younger sister Clara, who will be a freshman at Saxony next school year. Clara will be a three-sport athlete as she will play volleyball in the fall, basketball during the winter and of course soccer at spring time.

Heading into this season, the things Brune has focused on to improve her game the most has been her conditioning as well as foot work, quickness and overall shooting. Brune spent the fall lifting in the morning before school and then took to the soccer field after school to focus on her foot work.

“I think that’s really going to help me out this season just being quicker on the ball,” Brune said. “This past summer, I would run everyday and then do a mixture of sprints and long distance. The better in shape I am, the easier the games are.”

Brune keeps to a workout plan as her training varies from day-to-day, whether it be 10 to 12 sprints in one session or running a certain distance. In the weight room, Brune focused on strengthening her legs and especially her arms.

“I definitely worked on my upper body a little bit more because I definitely needed to work on that,” Brune laughed. “But I also worked on toning my lower body.”

Brune also sticks to a diet, where she primarily focuses on eating what is best for her.

“A lot of my friends make fun of me for that, but taking preparation of how to eat helps a lot in games,” Brune explained.

Even though Saxony brings back senior talent like Brune, Mueller and forward Olivia Spanley, the team will also rely on younger players to step into starting roles.

“I feel confident that we can do this and even though we are young and inexperienced, Coach Crawford has always done a great job with us,” Brune said. “He’ll get us ready.”

Crawford took over the Saxony girls soccer head coaching job when Brune was a freshman, so she is a member of his first group of seniors he has coached all four years of their career.

“[Brune] is the best player in Southeast Missouri — I have no problem in saying that,” Coach Crawford said. “Any class, she is the best. … She is like having another coach on the field I.Q. wise.”

Saxony’s girls basketball team led by Brune, Mueller and Spanley finished one game away from reaching the Class 3 Final Four after the program won its eighth-straight district championship and seventh-straight sectional title this winter. Brune says by playing basketball they all grew closer together, which will only help their chemistry this spring.

“I think that’s really going to help us out this season because we learned how to be leaders,” Brune said. “Makayla is awesome — she’s a go getter. She has really good foot skills, a high soccer I.Q. and is really good at passing the ball where it needs to be. Olivia works super hard. A lot of people don’t think she actually has speed, but she does so that takes defenders off their game. That’s going to be a really big aspect this year.”

Even though Brune and the rest of the basketball team failed to reach state this season, she still accomplished one of her goals by leaving with no regrets. Not reaching state in basketball does, however, motivate Brune to win a district championship and perhaps play at Swope Soccer Village in Kansas City, which is the host site for state.

Even if the Crusaders are unable to accomplish their goals of postseason glory this year, one can be sure that Brune is going to leave everything she has on the field.

“I just want to be remembered as the hardest worker out on the field and just being a great leader and good person — then obviously being a good player,” Brune laughed.