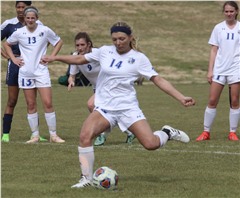 The Cape Notre Dame girls soccer team did not play in a single match heading into this year’s Noon Optimist Tournament, but the Bulldogs still came away with the title.

Notre Dame (3-0) faced off against Saxony Lutheran (3-2) for the tournament championship and defeated the Crusaders handedly 5-0.

“The girls were excited [to win this tournament] because they know so many of the players from the other teams in this area,” Notre Dame head coach Ryan Schweain said. “There’s a little bit of that rivalry aspect, so the girls definitely take pride in winning the tournament.”

Coach Schweain said he and his team were not worried about the outcome of this tournament as much as they were focused on fixing the issues they have seen in practice. He continued to say all coaches see this tournament the same way to figure out what their team needs to work on.

Senior Megan Heisserer, who signed with Southeast Missouri State before the start of the season, scored a game-high two goals for the Bulldogs. Heisserer scored her first goal in the 16th minute off a penalty kick, followed by Notre Dame’s fifth and final goal of the game with just over three minutes left in the match.

The Bulldogs had possession for the majority of the 80-minute match as they were able to get off 15 shots on goal to Saxony’s one, which came in the final 15 minutes.

“The last couple of games we were struggling with just go, go, go — we were just wanting to march down the field as fast as we could,” Coach Schweain said. “We talked in length before this game about really trying to slow it down and just letting the ball do the work for us.”

Scoring the first goal was senior Bailey Beussink as her shot was deflected by Saxony sophomore goalkeeper Alice Hogendobler, but a friendly bounce put the ball in the goal in the 11th minute.

When Notre Dame went up 2-0 in the 16th minute, Coach Schweain knew it was a vital moment in the game after what the Bulldogs experienced against Perryville in the semifinals. The match was decided in a shootout for the Bulldogs to win 4-3.

“[2-0] is a scary score — you always hear coaches talk about this, but it really is,” Coach Schweain said. “Going up 2-0, some teams have the tendency to drop their intensity level, and the other team will raise their intensity level because they know if they don’t get [a goal] soon the game might be out of reach.”

Excluding the Perryville match, Notre Dame’s defense has not allowed a goal since the team defeated Sikeston 5-0 to start the tournament. Notre Dame’s first-year starting goalkeeper sophomore Caroline Lochman came up with her ninth save against Saxony.

“Defensively, we had a pretty good game — just a few issues I think we need to tweak a little bit,” Schweain said. “They’ve been doing really well with their communication, but this is an experienced group. For some of them this is their fourth year playing varsity, and then the newer ones are learning from the ones who have been in the system a while.”

The two other players to score goals for the Bulldogs was sophomore Hannah Miller in the 57th minute, followed by fellow sophomore Mary Dirnberger at the 69-minute mark.

“I thought the goals were a nice build up trying to win the end line and get a cross in and a shot on goal,” Coach Schweain said. “Saxony does a really good job of closing lanes down. Their central defender [senior Cass Wunderlich] is a fantastic defender, and she’s hard to beat. The game plan was try to avoid her as much as possible.”

The lone player to get a shot on goal for Saxony was returning all-state junior midfielder Makayla Mueller as the returning two-time Class 1 Player of the Year and fellow junior midfielder Emma Brune failed to attempt a shot of her own. Brune has verbally committed to play for SEMO.

The Crusaders head coach Chris Crawford knew it was going to be a tough task to defeat Notre Dame on its home field, but he is still proud of his team’s efforts. He is not worried about the result as long as his team is continuing to improve.

Saxony started the tournament against Notre Dame’s junior varsity squad and won 2-1, while defeating Sikeston by the same score in the semifinals to reach this tournament title game for a second-straight season.

“We’ve got some work to do,” Crawford said. “Notre Dame’s JV team is better than most varsity teams, and we went and won the shootout in that. They went on and won the consolation championship pretty easily. … We lost four all-state players, and anybody who doesn’t realize how big a hit that can be doesn’t know soccer.

“We’re still trying to find ourselves a little bit. There’s no secret that Emma Brune is on our team anymore, so she’s taking double and triple teams and is still averaging a goal a game. We’re going to figure it out — we just don’t have that chemistry on the field yet.”

Hogendobler was able to save a number of Notre Dame’s 15 shots on goal even after being in the emergency room the night before.

“She made a save last night while she had that going on,” Coach Crawford said. “None of those goals were her fault — the ones that went off her hand she was at full extension. She’s still getting accustomed to things, but she admitted to me she’s been hurting for a little bit longer than she told us, so some of the things that have happened make sense.”