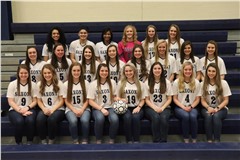 The Saxony Lutheran girls soccer team finished the season in unusual fashion compared to years prior as the Crusaders fell to St. Vincent in the Class 1 District 1 Championship match.

This was a title Saxony had previously won two years in a row with wins over St. Vincent, which eventually led to two-straight Class 1 State Championships.

The Crusaders finished 10-11 overall after suffering a shutout defeat to St. Vincent at 4-0 as the Indians went on to win state.

“I learned that we were very inexperienced last year, and that when I reflected on the season for both myself and the team, I wasn’t good enough to get them prepared every day,” head coach Chris Crawford said. “I couldn’t expect them to be as good as I wanted, so we took a step back and reworked some things.”

Crawford said there are new focuses heading into this season for the team, but last year was a nice measuring stick for the future since Saxony basically graduated its entire roster in 2016.

One key focus for the team heading into this year has been fitness since Crawford noticed his teams were getting beaten in the second half or overtime.

The Crusaders played in a total of five overtime games last season, coming out with a 1-4 record.

Individually, Crawford has been having his players work on ball skills, passing and receiving and first touch since those aspects weren’t where they needed to be last year.

“In the past we have been able to kind of skip over that stuff because we had players that already had those skills ingrained in them,” Coach Crawford said. “Last year while we had some that did, we didn’t have 14, 15, 16 that did. When we skipped over some of it, it left some people in the dust. It didn’t allow the product on the field to be what we wanted it to be.”

Saxony returns a total of four Class 1 All-State honorees heading into the season, starting with the Co-Player of the Year, sophomore forward Emma Brune.

Earning first team all-state honors along with Brune was fellow forward and now senior Laurel Mueller, who was selected to the second team as a sophomore and named honorable mention as a freshman.

“Laurel does so many things for us,” Crawford said. “She’s fast, she’s able to score, and I think we put a lot of pressure on her, but we don’t put as much as she puts on herself.”

“Laurel and Ashley have kind of been stallworths since their freshman year,” Coach Crawford said. “Ashley went on from being one of the best one-on-one defenders as a freshman and a sophomore to having to go into the goal [last year]. That was a big deal for us — As a staff and as a team we didn’t realize how much she completly shut somebody out of a game.”

“That gives us more depth now, so we don’t have an excuse anymore,” Crawford said. “We’re not starting six freshmen anymore.”