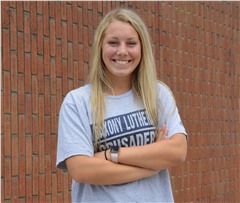 Missouri high school girls soccer began in 1985, and since then there has never been a three-time Missouri High School Soccer Coaches Association Player of the Year — until now.

Saxony Lutheran junior midfielder Emma Brune earned the top honor in Class 1 for the third-straight time this season after once again leading her team in scoring.

“I’m really honored by [being named player of the year for a third time], and I just couldn’t do it without my teammates and coaches,” Brune said.

Brune has played soccer ever since she was 3-years-old before attending high school, but she almost decided not to play at Saxony Lutheran. This was because Brune wanted to focus on her basketball career, but her older sister, Maddie, was not having it.

Now a three-time girls soccer Class 1 Player of the Year selection, Emma is glad her sister talked her into playing soccer at Saxony, especially since it is now her favorite sport. Like her sister, who plays soccer at Troy, Brune will also continue her career in college since she verbally committed to Southeast Missouri State following her sophomore year.

“[My sister] has helped me a ton, like, we go out on the field and work out together all the time,” Brune said. “She’s back at school now, but in the first part of the summer we’d go out every day and work on ball skills and stuff like that.”

Also motivating Brune to play soccer in high school was her current head coach Chris Crawford, who took over the program in 2017.

“They talked to me [about playing] a lot, and I was like, ‘All right, I guess I’ll play,’” Brune said. “I took off [from playing soccer] my eighth grade year. I missed it a lot.”

If Brune had decided not to play soccer at Saxony, the program’s now five-year streak of having the Class 1 Player of the Year would have likely come to an end. There would also yet to be a three-time player of the year in Missouri girls soccer history.

To earn the honor a third time, Brune scored a career-high 35 goals this season while dishing out 14 assists, which is the second most she has ever recorded in a single season. Brune had a career-high 20 assists last season as she scored 30 goals to earn player of the year a second-straight time.

Brune also led the Crusaders in both categories her freshman year, but she still has yet to reach the Class 1 Final Four like her sister did in 2016 to help Saxony win its second-straight state championship.

“I think every year I’ve been surprised that I’ve got it since we haven’t gotten to state,” Brune said. “Each year I tell [Coach Crawford], ‘I’m not going to get it.’ Then I get it, so it’s just a real big honor.”

For the past three years, the Crusaders’ season has ended in the Class 1 District 1 Championship against St. Vincent, which won back-to-back state titles before finishing as runner-ups this year.

The last two district finals matchups between Saxony and St. Vincent have been decided by one goal, as this year’s game even went into overtime. After each goal the Indians scored in the first 80 minutes of this year’s district final, it only took Brune two minutes to answer with a goal of her own for her fourth and final hat trick of 2019.

“I’m really proud of the season we had,” Brune said. “We had a pretty rough start, and then we came back and improved a lot. Definitely not satisfied with the season, but I think in all we had a good one. … We wanted [to win districts] really bad, and we’d been down before so we knew we could come back each time.”

Brune said she took a lot of time during the offseason to focus on her game because she strives to continue being the best player in the state. She spends about 80 percent of her time training focusing on soccer, while giving basketball the other 20.

Crawford said he noticed Brune was much calmer on the ball this season and that when she decided to take over a game that it just happened. There were also nearly no times where Crawford would have to tell Brune to calm down and let things come natural to her.

“Mentally she’s just a totally different player,” Coach Crawford said. “We went down three different times against St. Vincent, and within two minutes she put a ball in the back of the net. She could step on the field for SEMO right now and be an impact player.”

Brune also had to step up even more as the team’s leader this season since former all-staters like Laurel Mueller, Ashley Fritsche and Masyn McWilliams graduated. This was also the case on the basketball court.

Brune has always been a leader but mainly by example since she will tell you she’s naturally a quiet person. Crawford jokingly thought she was a mute for the first few years she played for him.

“When things got tough, she didn’t shy away from [being vocal this year],” Coach Crawford said. “She was right there ready to pick people up and tell them, ‘Let’s go. We’re not out of the game.’ It’s been a huge difference, and she actually speaks now.

“I think she would tell you in the past when she got frustrated she shutdown to everybody outside of her. She didn’t let that be known this year. She would be frustrated, but she was still vocal leading with her voice. That’s a huge deal for us.”

As a member of Saxony’s girls basketball team, Brune helped lead the Crusaders to win a seventh-straight district championship while being named all-state for the first time. She also reached 1,000 career points en route to breaking the program’s single-season scoring record.

This upcoming school year will be the final time Brune plays high school sports with hopes of advancing to the state final four in both sports before she heads to SEMO.

“I’m working more on speed, lifting and getting stronger,” Brune said. “I just want to make as big of an impact as I can and go as far as we can in the postseason.”