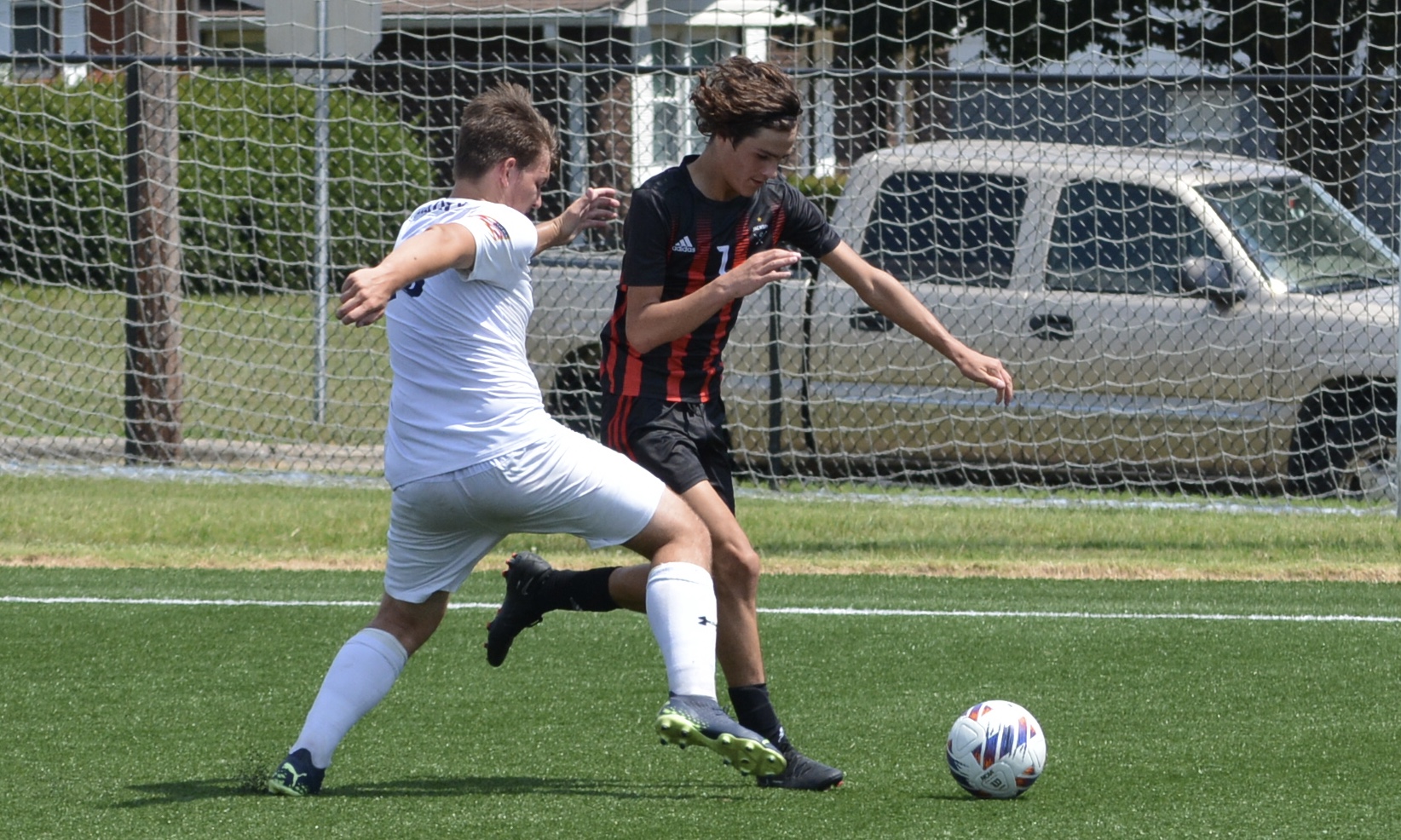 Sophomore Aiden McMinn (right) scored Jackson’s insurance goal in the second half for the Indians to beat Saxony Lutheran 2-0 Saturday at home. Photo by Nick McNeal

After falling to Rockwood Summit 4-1 Friday on the road, the Jackson boys soccer team bounced back with a 2-0 shutout of Saxony Lutheran Saturday at home.

This was drastically different compared to last season’s shootout between the Crusaders and Indians, where 12 goals were scored with Jackson coming out on top 7-5.

“I thought our boys did a lot better from last night — we try to improve every game,” Indians head coach Zack Walton said. “We won a lot of 50-50 balls in the air, and we put our head on the ball, which was one of our big goals for this game.

“We knew if we could do that, we can definitely have more possession of the ball. Things can go our way if we do that, so I thought our boys stepped up and did a much better job of that.”

Both goal scorers in this year’s contest also happened to be first-year starters as freshman Dylan Strothmann scored the opening goal in the 12th minute. Strothmann had a clear shot on the goal after Saxony’s senior goalkeeper Aaron Zoellner was forced to leave the net to make a save before the score.

“Saxony is a good team this year — they’ve got a lot of good players over there and are well coached,” Coach Walton said. “Anytime we can get the ball on the ground and start knocking it around a little bit with three or four passes — it really opens things up.

“That makes us hard to defend if we can stretch people out and possess the ball for a little while. It’s a little more predictable for us because we know where we’re going to go with the ball then. Offensively, we’re going to get some good opportunities this season.”

Fellow first-year starter and Jackson sophomore forward Aiden McMinn added the Indians insurance goal 14 minutes after Strothmann’s goal. McMinn had another shot on goal in the 32nd minute before conclusion of the first half.

Other players for Jackson to come up with shots on goal was junior Jake Miller (25th minute) and sophomore Kayden Crooks (54th minute).

This was, of course, the first shutout for Indians junior goalkeeper Bradley Loos, who came up with some key saves throughout the match and led the defense vocally.

While Saxony was able to create some scoring opportunities, Crusaders head coach Chris Crawford was disappointed with how his team started the game. However, Crawford felt like his team made it an even game in the second half when Saxony kept Jackson scoreless.

“I think we had jitters being at Jackson in our first real game of the year,” Coach Crawford said. “When we settled in, I thought we controlled the pace of the game how we wanted to for a long time. That first goal was an unfortunate break for us.”

Crawford commended his veteran goalie Zoellner after this performance as the Crusaders are currently having to play without the 2021 Class 2 Defensive Player of the Year senior Paul Kauffman. Kauffman was out of the game with a knee injury.

“Really neither goal was his fault — he did what he was supposed to,” Coach Crawford said. “We didn’t clear the ball at the line. … He’s a monster, and I think he’s probably the best goalkeeper in Southeast Missouri right now.”