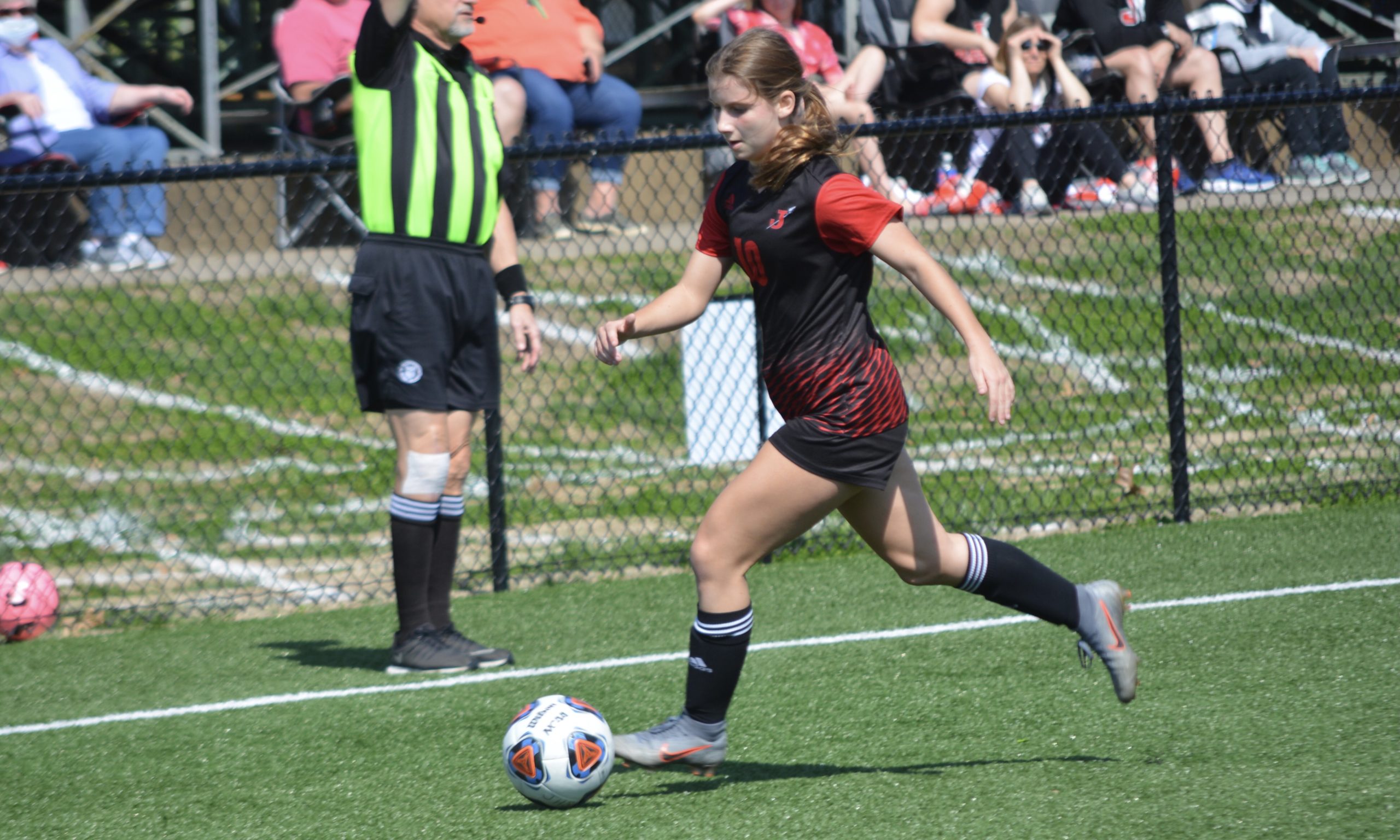 For the past four seasons, the Jackson girls soccer team has come away with the Class 4 District 1 Championship plaque. The Indians have also won at least 17 games in their previous six campaigns.

“That’s difficult to replace, but it’s an opportunity for some younger ones to step up and make an immediate impact,” Coach McMullen said. “There’s some open spots that’s for sure. Right now those younger kids are working hard.

Nelson paced Miller’s 48 points (20 goals, eight assists), who was an all-state selection, with 36 of her own off 12 goals and 12 assists. Nelson — the youngest daughter of SEMO coaches Heather and Paul Nelson — is now in her third year as a starter for Jackson.

“Justi Nelson has looked really, really good early on, and she’s injury free,” Coach McMullen said. “She’s very dynamic on the ball, so anytime you have someone like that you’re dangerous in the offensive thirds for sure.

“What we’re seeing right now out of Justi is maturity. What we saw in the previous years was just talent — she’s very talented and can do a lot of individual things. Now we’re starting to see a complete soccer player starting to form in Justi.

“We’re really pleased with the way she’s come in this year so far. Again, when you have that talent right there — that bloodline — you expect that to happen eventually. We’re going to rely on her heavily, but she’s not going to be the only one that we expect to able to score goals for us.”

One of Nelson’s older sisters Taylor currently plays for their parents at SEMO, while Justi and Taylor’s older sister Jordan was also a Redhawk. Jordan and Taylor are also former Jackson Indians.

In the net, Gerau only allowed a total of seven goals all of last season while producing a total of 17 shutouts. The Indians went on an eight-game stretch at the beginning of last season where they didn’t allow a single goal and outscored teams 24-0 before the annual Kickapoo Tournament.

Gerau also had shutouts in each of her team’s district games with a 3-0 win over Poplar Bluff in the semifinals and lastly a 2-0 victory over Notre Dame for the district championship.

“Hopefully Brooke isn’t too busy this year, but having someone back their like her is comforting,” Coach McMullen said. “

Another key returner to Jackson will be senior midfielder Abbey Klund as she scored 18 points with five goals and eight assists last spring. She officially signed on to play soccer at Southwest Baptist back in November.

“Abbey has worked extremely hard ever since her freshman year, and she’s another one who’s going to be pretty versatile and will play in the back some for us,” McMullen said. “In the midfield, she’s probably going to be all over the place. That’s someone we’re definitely counting on.”

Nelson and Klund will be joined by the likes of sophomore forward Olivia Klinkhardt in the Indians offensive attack. As a freshman, Klinkhardt recorded three goals and one assist.

“Olivia is someone who does a very good job of holding the ball up for us up top,” Coach McMullen said. “She loves to head the ball, and you don’t find that in the girls game very often. She’s someone we’re hoping that can step in and play a big role for us offensively.

“She’s starting to develop patience and understanding of the game. Things move really, really fast for you as a freshman, but as you get older the game slows down a little bit for you. … She’s a player that can score all over the field.”

Fellow junior defender Emilia Wunderlich is someone Coach McMullen has been impressed ever since the Indians first started practicing earlier this month. After spending the past two seasons as an outside defender, Emilia will help Wendel fill the void left by Emmendorfer and Ward in the middle of Jackson’s backline.

“Wunderlich is a very smart soccer player, and she goes about her job very quietly,” Coach McMullen said. “Some things that she does on the field that you just can’t coach are the angles she takes, and her patience.

“As a defender, that’s what you’re really looking for. She’s going to step into the middle of the field and basically quarterback the team from there.”

Senior defender Caroline Rivenburgh will also factor into Jackson’s defense, while one underclassman who will be in the mix to start on defense for the Indians will be freshman Mia Domian.

McMullen stressed that a team’s defensive backline is the spot on the field where he wants the most chemistry at early on. He said this because normally it takes time for an offense to jell.

“We’re feeling pretty confident as things go along. The one thing about this group is they’re eager and ready to learn, and they’re going to work hard,” Coach McMullen said. “Versatility is what we’re looking for from a lot of our players.”

Look at Jackson’s schedule, Coach McMullen believes this is what has always set his teams up for postseason success. The Indians face off against opponents like Helias Catholic, Marquette and will compete in one of the most difficult regular-season tournaments in the state at Kickapoo.

“Our strength of schedule builds us to be stronger at the end of the year,” McMullen said. “I think this team will be challenged at the beginning and throughout the season, so hopefully it sets us up to make another run in the playoffs. It’s going to be a patient year for us as far as developing chemistry.

“The biggest difference between this year’s team and last year’s is we developed chemistry right away. It was really surprising, but I guess it shouldn’t have been with the leadership we had. That’ll be one of the things we’ll have to adjust to is developing that chemistry, and I think that’ll take a little bit of time this year.

“As the year goes on and we start to develop that, this team is hungry. Again, we have tradition here and expectation. Just because we lost six doesn’t mean we can’t build another championship-type team. That’s just the expectation here.”