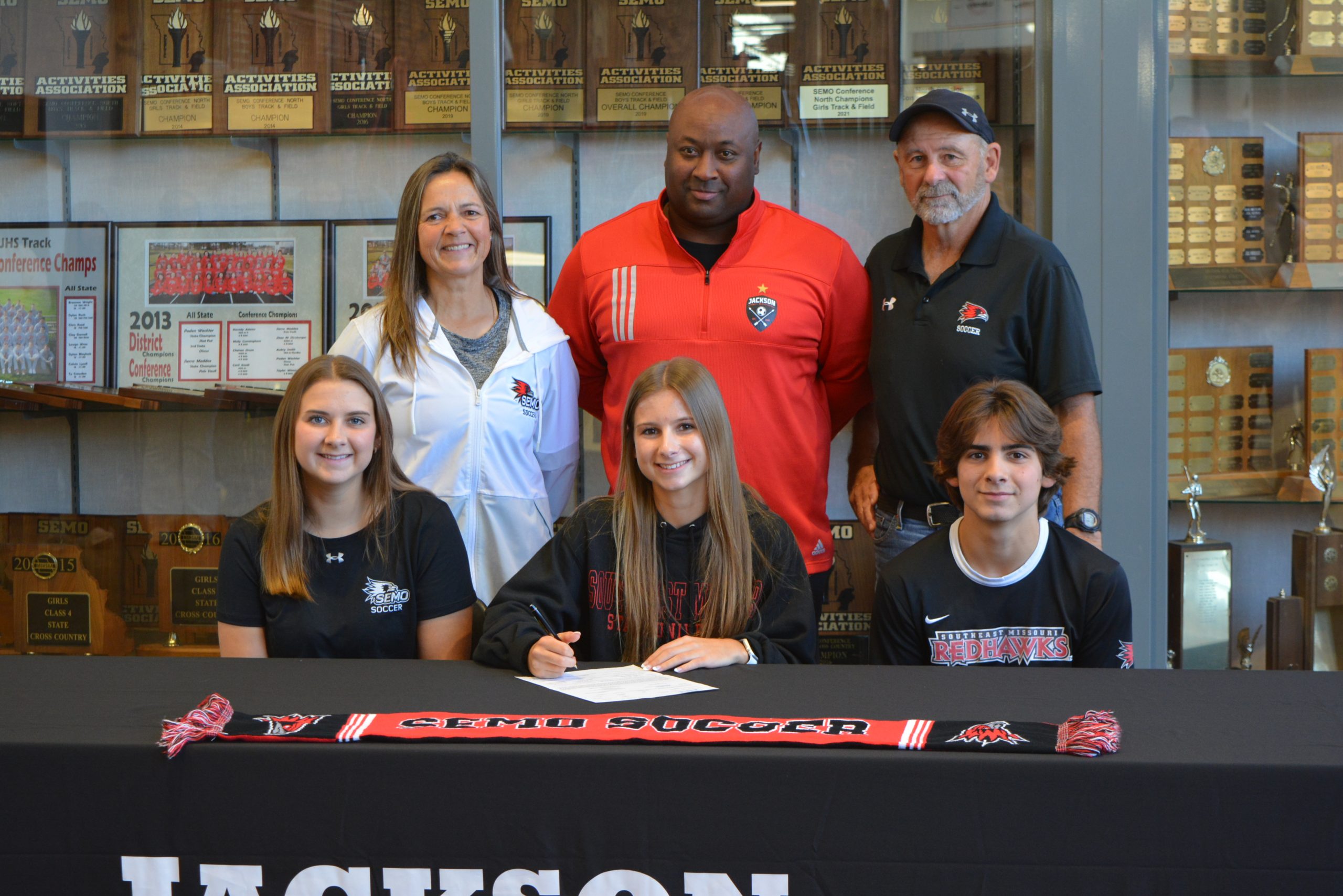 For Jackson girls soccer senior Justi Nelson, it wasn’t a matter of if the all-state midfielder was going to play collegiately but where. On National Signing Day Nov. 9, Nelson fulfilled a lifelong dream of hers by inking with the Southeast Missouri State soccer program.

Both of Nelson’s parents Heather and Paul have coached the team since before she was born, and Justi’s older sisters Jordan (2015-19) and Taylor (2020-22) both played for the Redhawks as well.

“Honestly, this makes me emotional because it has been my dream ever since I was a little girl to play SEMO soccer,” Nelson said. “I’ve grown up around the program, and I know their values and pretty much everything about it. I trust in my heart that I’m going to be in a good place around good people that want me to succeed.”

Also when Justi was making her decision on what school to sign with, the thought of being the third Nelson to play for SEMO went through her head. It was simply something she could not pass up.

“I just thought, ‘Isn’t that so cool,’” Nelson recalled. “You don’t hear about that very often where three siblings get to play Division-I college soccer. That’s so cool to me, and I think it’s really special to our family.”

Nelson’s parents Heather and Paul have been coaches of the program since its inception in 1999.

Nelson’s mom Heather has also been named the OVC Coach of the Year five times throughout her 24 years as SEMO’s only head coach.

“They are great coaches — my mom is gifted tactically,” Nelson said. “She knows how to play the game, and she knows how to see the game. My father is gifted technically — he knows what to do with the ball and who to play it to.

“They’ve taught me pretty much everything I know, and they’ve set me up in the best way possible. I feel like they’ve put so much into me, and I owe them. I’m going to put out for them and give them all that I can.”

Justi can recall her earliest memory of being around the program when she was about six or seven-years-old. Nelson said she loved the players in the program and wanted to be around them all the time.

“I wanted to be best friends with them, and they were my role models,” she said. “Like, I looked up to them and said, ‘I want to be in their shoes,’ and now in a year I can be in their shoes — it’s refreshing.”

Three former Redhawks that Justi idolized were Natasha Minor (2013-16), Hayley Abbott (2009-12) and current SEMO assistant coach Esmie Gonzalez (2016-19). Nelson was actually in attendance for Gon-zalez’s signing, so this makes for a full-circle moment in Justi’s eyes.

Nelson was also the Indians second-leading scorer her sophomore year when she produced 36 points after scoring 12 goals and dishing out 12 assists. Justi paced current SEMO Redhawk Katelyn Miller that season.

“I’ve really enjoyed the community here at Jackson,” Nelson said. “Sometimes when I go to St. Louis, it’s harder because you’re at a distance and not with those people all the time. When I come here, it’s like home, and I know that I have my friends, family and Coach Mac [Jackson head coach Justin McMullen] right by my side.

“It’s a very wholesome feeling, and I think that’s another reason why I chose SEMO because it is home. It is my family and it feels like my family.”

When Nelson first started ever playing soccer, she can recall her parents saying there was a chance that she might not like it. There was nothing anyone could’ve said or done to make Justi not love soccer, though.

“It’s always been a part of me, and I will never want to let go of that part of me,” Nelson said. “This is my senior season and it’s going to be emotional — it’s the last time I’ll get to play for Jackson. At the same time, I’m so excited to continue playing for four more years. I’m just giddy about everything!”

One way Nelson has separated herself from the competition to arguably be the best player in Southeast Missouri is by playing for St. Louis Scott Gallagher the past four years. This allows Justi to play all year round as her team in St. Louis competes during the summer, fall and winter.

Justi said she has traveled many places while playing with St. Louis Scott Gallagher like Chicago, Michigan and Wisconsin to name a few. Nelson said it’s the most competitive soccer she’s ever played.

“It pushes me beyond my limits, and I’m on the verge of passing out after those games,” Justi laughed. “It’s so much fun to step off the field and say, ‘I did everything I could — I put all my energy into it.’”

What Nelson is most proud of improving on over the years is becoming a better teammate because when she was younger, Justi was primarily focused on being the best player on the pitch. Nelson has come to realize that the way she interacts with her teammates and coaches is just as crucial as her individual talent.

“They’re going to help me out on the field 10 times more than if I’m not friends with them,” Justi said. “Being able to create a close-knit community with my teammates has helped me out a lot more than I anticipated to begin with.”

Along with Miller, Nelson will also join another former Indians teammate Grace Crowden at SEMO. Other area talents that Justi is going to play with while being a Redhawk is Emma Brune (2020 Saxony Lutheran graduate) and Megan Heisserer (2019 Notre Dame graduate).

“Those girls have done an amazing job at showing that you can be from a small town and put all of your work into one thing and be great at it,” Nelson said. “I want to follow in their footsteps — I want to be that Emma Brune, and I want to be that Megan Heisserer. They’re great people, too, along with being great soccer players, so I strive to be like them.”