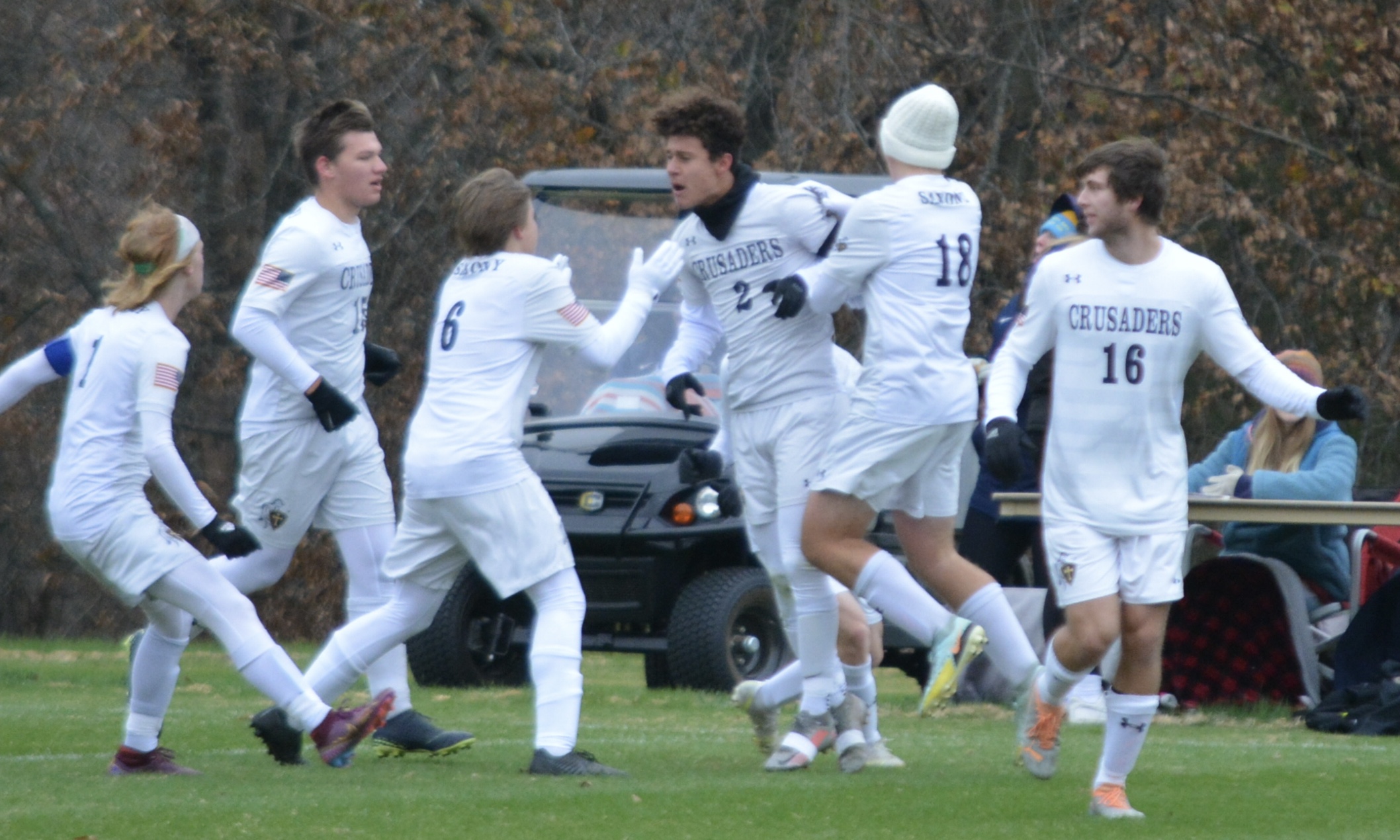 The Saxony Lutheran boys soccer team celebrates after senior Max Richey (No. 2) scores a goal in the first 10 minutes of the Class 2 State Quarterfinals on Saturday at Principia. Photo by Nick McNeal

On Saturday in St. Louis, the Saxony Lutheran boys soccer team cemented itself in school history as the second-ever group in program history to qualify for the state final four.

The Crusaders did so by defeating a Principia team that won the 2019 Class 1 State Championship after beating Saxony 3-1 in the state quarterfinals. This was, of course, back when this year’s seniors were freshmen.

However, Saxony won 1-0 this time around versus the Panthers as the Crusaders came up with the game’s first and only goal within the first 10 minutes of the match.

“There’s been a bunch of times that people counted us out this year, and there were a lot of times where we could’ve folded,” Saxony head coach Chris Crawford said. “We went through a lot of adversity throughout the season, and they just kept battling. They did everything I asked them, and it’s pretty surreal right now.”

This was also the 10th shutout of the season for Saxony and third in the playoffs as senior goalkeeper Aaron Zoellner came up with multiple saves throughout. While maintaining a 1-0 lead for 70-plus minutes might’ve been a nerve-racking situation for Zoellner and his team, they were more than up for the task.

“It was definitely difficult trying to keep the lead, but we fought real hard,” Zoellner said. “Putting up the goal in the first half really helped us, and we talked about the game getting on them early and getting one in. My save in the last 10 minutes came against No. 1 [junior Felix Barrios Canas], and he had a good shot from about the 18. I made a diving save, and I was really proud of that one.”

Zoellner credited a fellow senior in defender Landon Ochs for the shutout because of how quickly he plays in the back line to track down players with the ball. “Our line is pretty sturdy in the back — we’re just really solid in the back it’s just a good defense,” Zoellner added.

Coming up with the goal for Saxony was senior midfielder Max Richey as he found the back of the net on what he initially meant to be a cross pass. Richey had attempted a shot on goal from long early on in the first 10.

“Honestly, I didn’t even mean to shoot it — I was going for a cross,” Richey said. “When I got the ball, I saw an opening in the back post, so I just put the ball in. The second I hit it, I told my teammate, ‘That might go in!’ It went in — I’ll take it.”

Richey and the Crusaders were down two starters entering the matchup, but rejoining the team for it was the 2021 Class 2 Defensive Player of the Year, senior midfielder Paul Kaufmann. Paul had missed the entire season with a knee injury up until last weekend, but he didn’t miss a single minute of the quarterfinal and will now play in his first state semifinal match on Friday.

Kaufmann played at every single part of the field for the Crusaders as he started at forward to help apply pressure to Principia’s goalie. Paul then moved back to play in the midfield and lastly was at center back defensively to end the game.

“I really didn’t expect the season to go like this, and I’m so happy we came out with the win,” Kaufmann said. “This entire season, I’ve been on the sideline watching, which really hurt. Stepping on the field for the first time in a while, it means the world to me.

“Coming into the game, I didn’t want to go straight to center back to keep me safe. At the end of the game, I ended up being at center back. I played wherever my team needed me — it’s nice to finally do that again.”

The two starters the Crusaders were without against Principia were senior forward Michael Hasz and junior midfielder Luke Eggemeyer. Despite that being the case, Saxony couldn’t have had a bigger momentum boost than having Kaufmann back on the pitch.

“Having him back was huge for us. Being down two starters and putting P.K. out there — you’re never sure what you’re to get from a guy coming off an injury,” Coach Crawford said. “He’s been working his butt off, and I can’t say enough about Eggemeyer and Mike.

“Neither of them could play, but they were cheering as loud as they possibly could and doing everything on the sideline they could. I know they’d rather be out on the field, but it was great to have them on the sideline helping keep everybody focused and on the job. It would’ve been easy for us to lose that focus real quickly.”

Saxony (15-9) will face No. 4 ranked Orchard Farm (20-5) with a trip to the Class 2 state title game on the line Friday at 2:30 p.m. at the World Wide Technology Soccer Park in Fenton. While the Crusaders have won their last five matchups, the Eagles are currently on a nine-game winning streak and have only allowed multiple goals on two occasions this fall.

However, Saxony has faced some of the better teams in the state this fall, including Class 4 No. 2 ranked Chaminade in the SLUH Tournament. Coach Crawford is very much confident that his team can compete with anyone it faces this weekend.

“If we stick to our game plan and execute, we can play with anybody,” Crawford said. “I don’t think we’ve lost to a Class 1 or Class 2 team all year — most of our losses are to ranked teams in classes above us. Coach [Andrew] Lysell and I are going to watch a lot of film. We’ll be prepared for anyone that we’ve got and give it our best shot.”

Whichever team wins between Saxony and Orchard Farm will either face Class 2 No. 2 ranked Marshall (22-2-1) or No. 7 Excelsior Springs (15-5) for the state championship on Saturday.

“We’re a really close team,” Richey said. “We just always play for each other and that’s what you need to go to state. You have to play hard — it just doesn’t always take talent.”