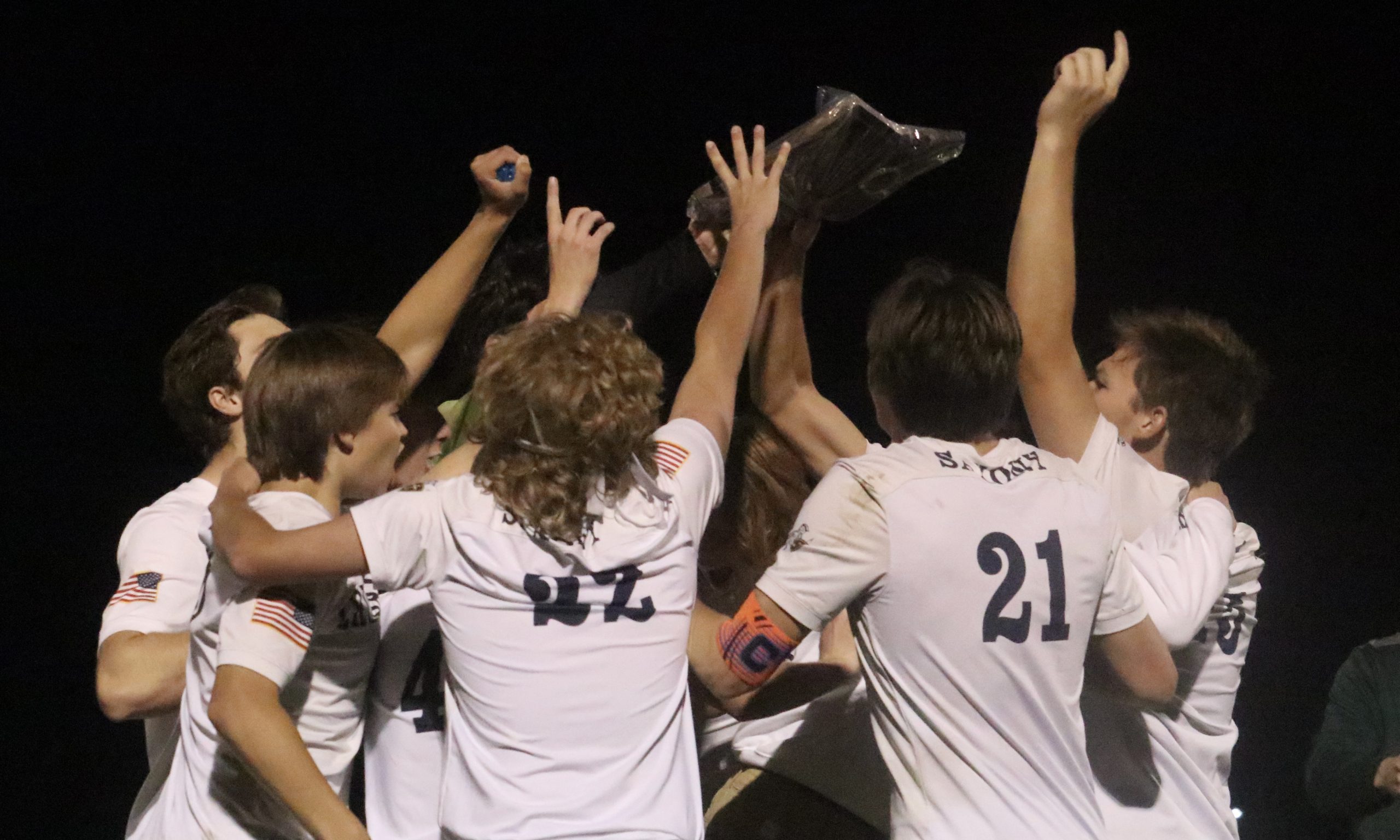 The Saxony Lutheran boys soccer team hoists a district championship plaque for the first time since 2019. Photo by Justin Hotop

Heading into this season, it had been two years since the Saxony Lutheran boys soccer team last won a district championship after winning six-straight in Class 1. That changed last Thursday night in Perryville.

The Crusaders did so in penalty kicks after not one but two overtimes with no score after a scoreless first 80 minutes. Along with producing a shutout, Saxony senior goalkeeper Aaron Zoellner came up with two saves in penalty kicks to win 5-4 and take the match 1-0.

“It was a pretty crazy feeling — there were a couple of times where it looked a little bit bleak for us,” Crusaders head coach Chris Crawford said. “We strongly believe Zoellner is going to come up with saves in penalty kicks every shootout, and he did that for us. We did just enough to win.”

Saxony had what Crawford described as “three quality opportunities” to score in the first 10 minutes, which he believed got into his player’s heads a little bit. The Crusaders had also went into penalty kicks for their district semifinal match with Perryville, which Saxony won 2-1.

“Heading into penalties, my message was the same that it was on Tuesday, and the guys were like, ‘We’ve done this. This is nothing new,’” Coach Crawford said. “It helps to have a bunch of seniors on your team and guys that you can go to and know they’re going to do their job. They’ve been doing this for a long time.”

Throughout its last five games, Saxony’s defense has only allowed one goal to outscore the opposition 18-1. Coach Crawford credits not only his back line and keeper but also the entire team for how well the Crusaders have been playing defensively.

“We all put the work in — it’s going to be very difficult for us to be scored on,” Crawford said. “As long as we don’t leave someone wide open, we think Zoellner is going to be able to save almost everything else. There’s that belief, and we’ve really turned up our intensity defensively over the last little while.”

Scoring the penalty kicks for Saxony in order were seniors Max Richey and Michael Hasz, sophomore Brayden Moore and lastly seniors Jace Boland and Landon Ochs. Senior Noah Smith missed his shot, while junior Luke Eggemeyer had to be replaced by Moore due to suffering an injury in overtime.

While most of these seniors have played since they were freshman, what’s been really impressive is they were able to win a district title without last year’s Class 2 Defensive Player of the Year senior Paul Kaufmann on the pitch due to an injury. However, Kaufmann has still been with the team and on the sidelines standing right next to Coach Crawford the entire year.

“This is a really special group to me. The last year we won a district championship was their freshman year in Class 1,” Crawford said. “We move up to Class 2 the next year and are by far the best team in our district and one of the best in the state, and we get upset by a fluke goal in the district final.

“Last year in the district championship, Perryville was just better than us. That final big-game experience is nothing new to these guys, and I think some of the pain they went through the last two years really led them to dig deeper than we ever have. I’ve got six seniors on the field and one standing right next to me — they weren’t going to let this happen.”

Other players who have been crucial for the Crusaders outside of their senior class, Eggemeyer and Moore has been the likes of sophomore Johnathan Pfieffer, sophomore Jackson Wilson and freshman Baylor Wilson.

Saxony will now face Principia on Saturday with a trip to the state final four on the line, which the Crusaders made back in 2017. The Crusaders and Panthers are no strangers as Principia beat Saxony in the 2018 and 2019 Class 1 quarterfinals.

“Principia is obviously an incredible program — they are always very disciplined,” Coach Crawford said. “I look for it to be a defensive battle. We hang our hats on outworking people and playing defense well — that’s how I’ve tried to build our program. If you ask Principia’s coach, he will probably tell you a pretty similar thing. I have a huge amount of respect for him.”