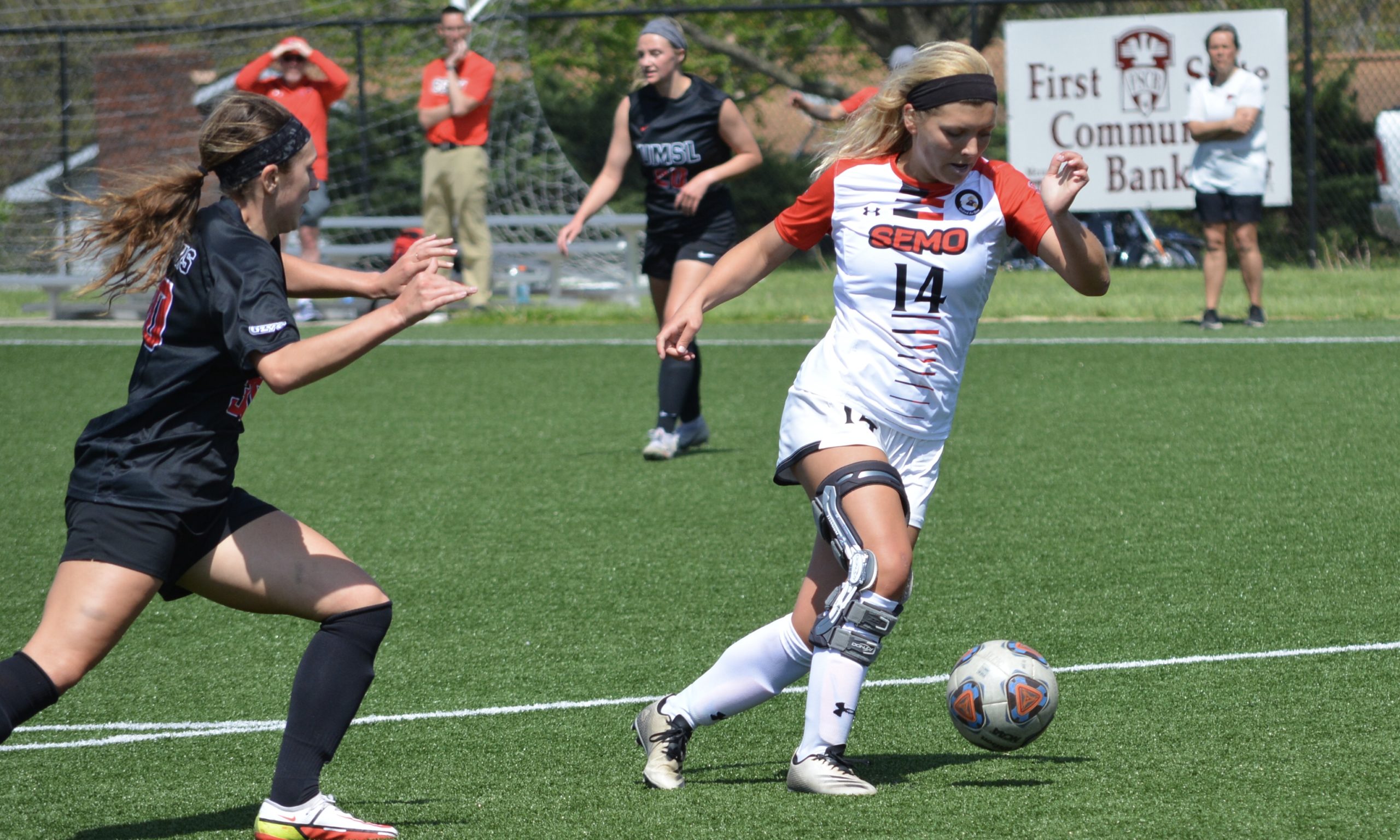 Southeast Missouri State soccer’s junior forward Megan Heisserer (right) will officially play in her first regular-season game since March 5, 2021, next Thursday on the road at Missouri. Photo by Jay Forness

Next Thursday, this will change when Heisserer, who has missed the last two seasons with an ACL tear, and the Redhawks travel north to face Missouri in a non-conference matchup.

“I’m super excited because it’s been a long time — almost two years,” Heisserer said. “Just finally putting in all that work in the background and then actually getting to be on the field where I’ll hopefully make a difference is so exciting.”

Megan suffered the injury back on March 5, 2021, when SEMO opened its regular season during the 2020-21 school year. The Redhawks normally play in the fall, but that season was pushed to the spring because of the coronavirus pandemic. This also forced Megan to miss the 2021 season last fall since she didn’t have enough time to fully recover.

“It was super tough [because of that], but I tried to take just the positives of the situation,” Heisserer said. “I still got to be around the team, which was amazing, so I think that was a huge part — still being able to be around everyone.

“Coach [Heather] Nelson made it possible to where I could still travel with the team and everything. I would’ve been extra sad if I was here and they would’ve been gone every weekend.”

Heisserer ended up only playing in 39 minutes of her sophomore year before tearing the ACL in her right leg. Without Megan, SEMO was still able to reach the OVC Tournament Championship game that season, but the Redhawks fell to Southern Illinois – Edwardsville 2-1.

Last fall, SEMO finished three games under .500 but advanced all the way to the OVC Tournament semifinals and fell to SIUE once again.

Heading into 2020-21, Megan was coming off a freshman campaign where she helped SEMO win its eighth Ohio Valley Conference Championship and recorded the second-most goals for the Redhawks with four.

Two of the goals Heisserer scored were game-winners with the last being against Tennessee Tech to clinch the 2019 OVC regular season title. Megan’s goal helped break SEMO’s five-year drought of winning a conference championship with a OVC record of 8-1-1, which was its best since 2011.

Before the 2020-21 season, Heisserer was the only Redhawk named to the OVC Preseason Watch List. Along with her four goals as a freshman, Megan added two assists for a total of 10 points (fourth most on team).

“My focus for this season is getting back to where I was, and I think I’m on the right road,” Heisserer said. “I can’t get mad when I’m not, though, because it’s been a long, long recovery. I think eventually I’ll get there, but that’s the goal I’m working towards is to get back to where I was.”

Even though Megan has only been able to be a spectator for the past two seasons, she’s been able to see the game from a coach’s point of view. This spring, Heisserer actually returned to her alma mater Notre Dame to help out as an assistant coach, which is the same program she helped win two state championships (2017 and 2019).

“It was fun but weird [coaching at Notre Dame] since I didn’t go to school with most of them, so I feel old,” Heisserer laughed. “It’s definitely a different aspect of the game and you learn a lot of stuff you’d never see on the field. I’ve learned how more people play and what their strengths and weaknesses are. I think I’ll be able to use that on the field when I start playing with them.”

While Megan could mainly only watch during her recovery, there were times when she could compete in a drill. One in particular stands out to Heisserer, which was when she made her first shot since the injury and her teammates couldn’t have been happier.

“I made the shot during one of our scrimmage walk-throughs, and everyone just started cheering — it was so nice,” Heisserer said. “Every time I got to do a drill they cheered me on. They all even took me places when I couldn’t drive for two months after my surgery.”

Back in April, Heisserer actually returned to the pitch for the first time since suffering her injury to compete in spring play (scrimmages) against Maryville, Southern Illinois, Southern Indiana and UMSL. She did have to wear a brace around the injury during these games, though, but won’t have to play with it this season.

Coming off the injury, Megan said she’s had to take things day-by-day and improve any chance she gets since “you’re not going to come back the same athlete you were.” While she was having treatments on campus and doing therapy at Health Point Fitness, Megan would also try to improve on her own game at practice.

“When I first came back I was like, ‘Oh, what do I do?’” Megan laughed. “Once I got going, everything came back to me and it was super exciting. It’s just good to be back on the field with my team.

“I think I’m on the right track, and I’m so excited team wise. Everyone has been working so hard and really wants to win, so I think having that behind me will be a huge help, too.”

“It makes playing on this team more fun, too, because we’ve been friends since we were so young. Our friendship off the field builds our relationship on the field.”