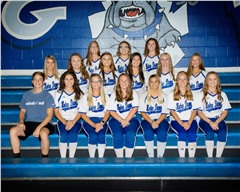 The Cape Notre Dame softball team’s three-year streak of making it
to the Class 3 Final Four ended last season as the Bulldogs fell in the Class 3
District 1 semifinals to eventual district champions Perryville.

This was a major disappointment for a program that has won a state
championship and made nine state appearances in the last 15 years. Jeff
Graviett has been the Bulldogs head coach ever since the team’s inaugural
season in 2003.

Heading into 2019 hoping to reclaim the district championship,
Notre Dame returns all but two starters from last year including two Class 3
All-State selections.

“I think [not winning districts last year] is a huge motivation,”
Coach Graviett said. “They [now] realize nothing is a given, and you try to
tell them that in the beginning. The group we had last year had experienced a
lot of success. … We had a very competitive district last year and really
looking at it any of the four teams could’ve won it.”

Notre Dame also dealt with adversity leading up to the district
playoffs by losing short stop Madison Landeros to injury, who was named first
team all-state the year before.

Coach Graviett also said that Kutz was not pitching at the level
she was her freshman year where she finished 20-2 overall with 178 strikeouts
and an earned run average of 1.54. In 2018, Kutz went 9-3 with only 54
strikeouts and finished with an ERA of 4.25.

“Heading into this year, I think Haley has kind of found her groove
back through the summer,” Coach Graviett said. “We have some young pieces
coming in and one of the top female athletes in the state of Missouri [Burger]
to lead off for us. We’re in pretty good shape right now.”

Burger is coming off a record-setting junior campaign with the
Bulldogs as she broke the stolen bases record with 44. She also finished with a
.517 batting average, 45 hits, 46 runs and 23 runs batted in.

Coach Graviett recognizes Burger as one of the best female athletes
in Missouri not only for her softball skills but also because she has won four
individual state championships as a jumper for the track and field team.

“I was talking to her the other day and it’s going to be hard for
her to break her stolen base record,” Coach Graviett said. “I don’t think 50 is
an unreachable number for her, and I can’t remember how long it’s been as a
team that we’ve stolen 100 bases. She’s a one of a kind athlete — not only is
she able to bunt and run the bases, but she may slap hit a home run for us this
year.”

Notre Dame was only 18 stolen bases away from stealing a total of
100 with 82 last season, so with a majority of the team’s starters coming back
who all have multiple base steals of their own it’s a reachable goal for the
Bulldogs.

Batting behind Burger will be junior outfielder Halle Heuring, who
only stole four bases last year while batting .291 with 16 hits, 19 runs and
eight RBIs. Graviett sees Heuring as another 30-plus stolen base player.

Another key player returning for the Bulldogs this season is senior
first baseman Grace Lemons, who batted .430 with 34 hits, 33 RBIs and 23 runs.

Coach Graviett believes this year’s team could go 15 or 16 players
deep with the talented incoming freshman class, which should create
competitions throughout the lineup.

“They’re not going to be able to be relaxed,” Coach Graviett said.
“We have a couple kids who could be three year starters for us, so keep pushing
them to make them better and that’s what your championship teams are built on.
No one getting satisfied with where they’re at and will keep being pushed.”

The team also has three freshman pitchers coming in to provide
depth on the mound behind Kutz with Hailey Burnett, Katie Dohogne and Halle
Ressell. Senior Brittany Porter will also return to the pitching staff, who did
not manage to see any innings last year.

“I haven’t seen [the three freshman] a whole lot, but I don’t think
a whole lot separates them,” Coach Graviett said. “They’re all three athletic
kids who play the field and hit as well. … Your fear always is you’re always
one injury away like last year, so I feel more confident than ever that we can
overcome a lot of adversity this fall.”