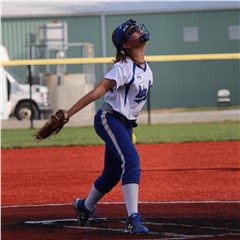 Cape Notre Dame softball was undefeated heading into the
championship game of the team’s Softballfest on Saturday.

The Bulldogs ultimately fell to out-of-state Magnolia
Heights 6-5 in extra innings in the title game, but before that they had not
allowed more than three runs in a single game.

Notre Dame has outscored opponents 87-17 through its first eight games as four Bulldogs are currently batting .500 or better. The team has
also come up with a total of 106 hits and 14 stolen bases.

Winning five of these games on the mound has been junior
pitcher Hailey Kutz (5-1), who has currently recorded 33 strikeouts with an
earned run average of 2.62.

Pitching behind Kutz is senior Brittany Porter, who is 2-0
overall with an ERA of 1.50 and six strikeouts.

Leading the way offensively for the Bulldogs is none other
than senior center fielder Riley Burger, who currently has a team-high batting
average of .519. She also leads Notre Dame with 16 runs scored and six stolen
bases, while being tied for first in hits at 14.

Right behind Burger in most offensive categories is senior
catcher Kristen Barwick, who is also batting .519 with a team-high 14 hits, two home
runs and 14 runs batted in. She has also scored a total of eight runs.

The two other Bulldogs batting .500 are junior Caroline
Lochmann and senior Grace Lemons.

Lochmann is one of the team’s six batters with 10 or more
hits along with Notre Dame’s second most runs at 11 along with five RBIs and
two stolen bases.

The Bulldogs have four other batters with an average of .417
or higher, which includes junior Halle Heuring
(.462), sophomore Ashley Carrow (.444), freshman Ainsley Burnett (.440) and freshman Kadi Dohogne (.417).

Burnett, Heuring, Lemons and Lochmann each have 11 or more hits as Dohogne
paces them with 10 of her own.

Lemons is second behind Barwick for most RBIs at 12 as
Heuring is tied for second in runs scored with 11 and also has two stolen bases.

Notre Dame’s defense has also been stellar with only four
errors and an overall fielding percentage of .970.