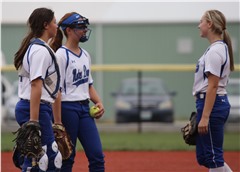 The Bulldogs lost to Warrenton 12-2 in the 2015 title game, and the outcome would be the same in this year’s championship as Notre Dame fell to Monett 4-1.

The Cubs took an early 1-0 lead over Notre Dame with two on and one out on a pop fly for an out, allowing the third-base runner, shortstop Katelin Kurima, to get home.

After sophomore Kristen Barwick was walked and replaced by freshman Caroline Lochman to base run to start the top of the second inning, senior Grace Friga singled on a bunt.

Monett forced Notre Dame’s first out during the next at bat, but junior Connor Overfield singled to third for Lochman to reach home plate to tie the game at 1-1.

Friga and Overfield were able to advance to second and third base, but the Cubs forced two outs to end the top of the second.

Notre Dame freshman pitcher Hailey Kutz threw two of her four total strikeouts to start the bottom of the inning allowing only one single to hold Monett scoreless in the second.

Monett then forced the Bulldogs into three-straight outs in the third inning where the Cubs regained the lead at 2-1.

Kutz and the Notre Dame defense forced the Cubs into a double play for the final two outs, but Kurima scored once again from third for her second and final run of the game.

Barwick was able to reach base again in the top of the fourth inning on a line drive to center field, but the Bulldogs had three-straight outs to follow. Notre Dame was able to do the same with allowing no runner on base to Monett in the bottom of the inning.

The top of the fifth inning went the same way the fourth did as sophomore leadoff hitter Riley Burger reached first base off a line drive.

The Bulldogs went scoreless again with three outs in a row, allowing the Cubs to take its 4-1 lead in the bottom of the fifth.

Monett loaded the bases with no outs in the fifth, and that is when rightfielder Maddison Gones hit a fly ball to right field allowing two runners to score after an error.

Notre Dame went scoreless the rest of the game and only reached base once more in the final inning off a bunt for a single by Burger.

The Bulldogs finish their season with a record of 27-4 having won the Class 3 District 1 Championship and placing second overall in Class 3.

Six batters finished with an above .400 average as senior Macy Landeros hit .457 with a team-high 48 hits and scored a team-high 44 runs.