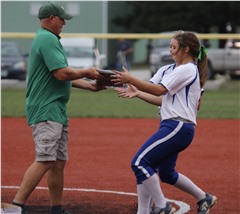 For the fourth-straight season, the Cape Notre Dame softball team will play in the Class 3 state playoffs.

This is because the Bulldogs were once again victorious in the Class 3 District 1 Championship game where they defeated Perryville 2-0 on Friday, Oct. 6.

Pitching the shutout was Notre Dame freshman Hailey Kutz, who is now 17-1 overall as the team’s starter.

Kutz recorded nine strike-outs against the Pirates, eight of which she had in the first three innings, retiring five batters in a row to start.

Notre Dame held on to the 1-0 lead until the bottom of the fourth inning.

Perryville would not go away quietly being down 2-0 as the Pirates loaded the bases in each of the final three innings.

Kutz allowed two singles and walked another batter with one out in the top of the fifth, but senior shortstop Madison Landeros was able to complete a double play to keep the Pirates scoreless.

Kutz walked two more batters in the first after allowing a single in the sixth. With the bases loaded and two outs, Notre Dame’s defense forced the ground out.

Finally in the seventh inning, Kutz walked a batter, allowed another on an error and the final a single with one out.

Perryville’s final two batters grounded out to end the game for Notre Dame to pick up the win.

The Bulldogs will now host Class 3 District 2 Champion Hillsboro (26-3) in the sectional round today with a game time of 4:30 p.m.