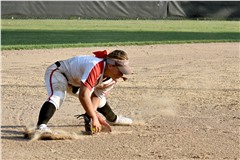 The Jackson softball team was seeded third in this year’s Class 4 District 1 Tournament as the Indians hosted No. 2 seed Northwest in the semifinals to begin the postseason.

Jackson (14-9) trailed early in the game as the Lions (17-8) scored four runs in the bottom of the first inning.

Freshman pitcher Karli Johnson got the start on the rubber, who walked the first three batters to load the bases.

This allowed Northwest junior Jaime Lee to hit a line drive into right field for a two-run single. The Lions next score came on a ground out before Johnson walked another batter via hit by pitch.

Senior Jordan Owens drove in the final run of the first off a bunt, which led the Indians to defend her differently later in the game.

Jackson was able to narrow Northwest’s lead to 4-1 as senior first baseman Libby Brakehane drove in junior shortstop Morgan Conklin in the second.

Johnson and the Indians defense was able to make quick work of the Lions in back-to-back innings to hold them scoreless till the fourth.

This allowed Jackson to take its first lead of the game as junior Ashlyn Prince drove the ball over the left field fence for a two-run homer to make it 4-3.

The next run scored by senior designated hitter Sierra Burch, who reached home off a double by freshman second baseman Miranda Carnell.

The run that gave the Indians a 5-4 lead over Northwest was sent in by Conklin as she drove Carnell in off a fly ball into left field.

In the top of the fourth before Northwest tied things up, Jackson had two runners on base with only one out, but Prince struck out swinging followed by senior third baseman Jayna Cutsinger grounding out.

Tied 5-5 heading into the fifth inning, Burch gave Jackson its final lead of the game off a solo home run sent past the center field wall.

The bottom of the fifth ended up being the Indians downfall as the Lions were able to score six runs off five errors.

Jackson only scored two more runs in the game as Northwest extended its lead to 13 off a two-run homer by sophomore Vanessa Cardenas.

Cutsinger and Burch also led Jackson in home runs with six and five respectively as Carnell came up with two.

Leading the Indians in both hits (30) and runs (29) was their leadoff hitter freshman center fielder Alli Gartman as Prince paced her with 29 hits and 20 runs.

Johnson finished with a record of 8-1 on the rubber along with 54 strikeouts and a 2.14 earned run average.