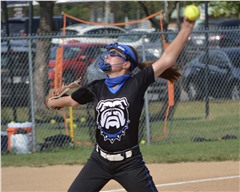 Last week, crosstown SEMO Conference softball rivals Cape Notre Dame and Jackson met for a battle of the unbeatens in the Jackson City Park. The game was as good as advertised since neither team took a lead until the seventh and final inning of play.

The 0-0 tie was broken by the swing of the Bulldogs sophomore catcher Ainsley Burnett, who hit a solo homer over the left-field wall to give Notre Dame a 1-0 lead in the top of the seventh. Burnett did this on the first at bat of the inning as Jackson’s junior pitcher Karli Johnson was able to get the final three outs to limit Notre Dame to just one run.

This was Burnett’s second home run of the season as the Bulldogs (7-0) have now hit a total of seven through their first seven games. Burnett tied Jackson junior shortstop Miranda Carnell for the game high in hits as she singled in her first at bat in the top of the second.

“Coming out of the gates, [Burnett] thought she was going to be that home-run hitter consistently and doing that type of stuff,” Notre Dame head coach Jeff Graviett said. “But she’s went back, and I told her it’s going to come. That’s what I told her last year, ‘You didn’t expect it. It came.’

“I think the fact she’s got Kadi Dohogne and Hailey Burnett hitting around her — with those three being sophomores in the middle of the order, the future is bright here. They feed off each other.”

In the bottom of the seventh, Notre Dame’s senior ace pitcher Hailey Kutz forced the Indians (7-1) first two batters into outs and finally made Jackson senior Katelyn Carter strike out looking for the Bulldogs to remain undefeated. Kutz (6-0), who has verbally committed to play softball at Fontbonne University, finished with three strikeouts and only allowed three hits with one walk in the contest.

“[Kutz] usually struggles here and struggles with Jackson,” Coach Graviett said. “This is one of those teams in the last couple of years that’s kind of had her number and hit her pretty well. Seeing her in form throwing a shutout against a team that’s been putting up good offensive numbers like we have — a lot of positives.

“We’re getting a lot of good things out of her, and that was really the first time she’s been pushed for seven innings. It was good to see her get that today.”

“Probably the biggest defensive question I had was who’s going to take over left field,” Coach Graviett said. “I feel like Caroline would step in, and you’re not going to replace Riley Burger. She has done a good job at center field, but who’s going to come it at left? [Carrow] made a tremendous catch in the corner and has done a great job for us.”

Combined, these players have recorded just one defensive error while shutting out five teams and only allowing two runs so far this season.

The Indians nearly hit a home run in the bottom of the fifth when junior first baseman Miranda Ladson’s line drive hit the top of the left-field fence. However, the ball bounced back into the field of play, giving Ladson a double instead of a homer.

Ladson was able to get into scoring position after a sacrifice bunt by Johnson, but she finished the inning stranded at third base. This was after Kutz struck out junior Lichelle McClellan looking for out two and forced sophomore third baseman Brooke Gerau to a fly out to Carrow to end the inning.

Gerau did, however, force Kutz to throw seven pitches before hitting into the third and final out as she recorded five fouls. Graviett liked what he saw from his senior pitcher in the inning.

“Hailey Kutz as a freshman got thrown into the fire and just pitched and didn’t do a whole lot of thinking out there,” Coach Graviett said. “She’s got a competitive edge now that she necessarily didn’t have as a sophomore. That’s big in those spots when you have to step up. We talk about, ‘Hey, there’s times it’s on your shoulders.’”

In the bottom of the third inning, Kutz had an impressive defensive play after Gerau hit a sacrifice bunt to Ressel for an out. With sophomore Gracie Metzger at second with one out, Kutz forced senior Maya Owens into a flyout that Kutz caught. Kutz then threw Metzger out at third base to end the inning.

Notre Dame and Jackson will face one more time in the regular season as the Bulldogs will host the matchup on Sept. 24.