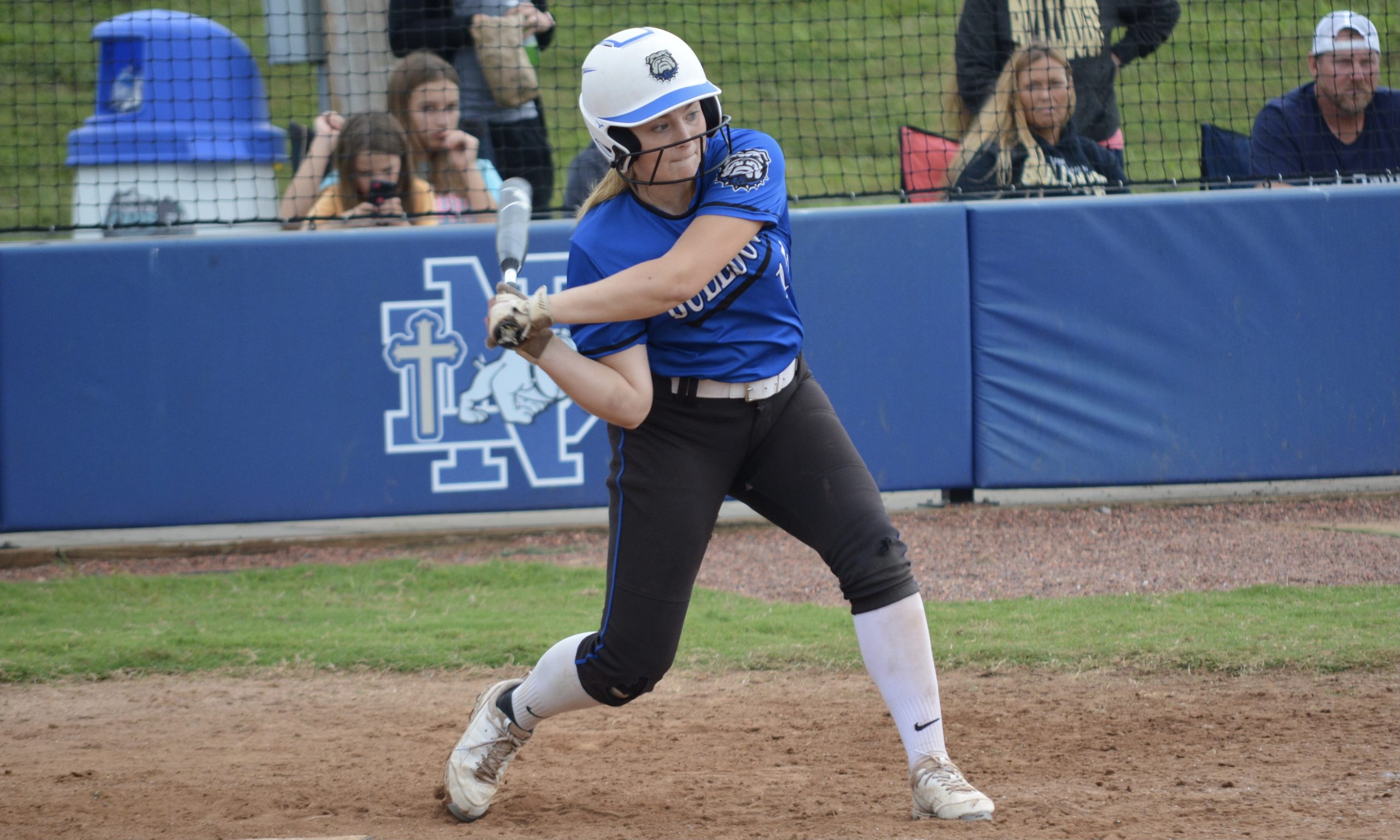 Notre Dame sophomore center fielder Jacie Smith had two hits and a team-high three runs batted in for a 8-5 win over Jackson at the City Park last Thursday afternoon. Photo by Jay Forness

After dropping back-to-back games in a doubleheader two weekends ago, the Notre Dame softball team has rattled off seven wins in a row.

The last four of these victories came in the Jackson Tournament as the Bulldogs (18-4) outscored their opponents by a combined total of 39-15 to come away as tournament champions.

Notre Dame picked up wins over Ft. Zumwalt West by a score of 8-4, Lutheran South 17-3, Neelyville 11-6 and Richmond 3-2. This was following a three-run win over crosstown rival Jackson in a SEMO Conference game on the road Thursday.

Leading the way offensively for the Bulldogs in their 8-5 win over the Indians was sophomore center fielder Jacie Smith. She came up with a two-run double in the first inning and followed that up with another run batted in during the second.

On the same play as Smith’s second and final hit of the game, Jackson had an error in the outfield, which allowed another run to score. Notre Dame took a 5-1 lead over the Indians at that point as the Bulldogs scored two more runs that inning.

“Jacie came up big [all of last week] — I told her she’s not a freshman anymore,” Notre Dame head coach Jeff Graviett said. “We’re well into the second half of the season, and she’s really been stepping up and doing a good job for us.

“From top to bottom, Jacie is one of the most talented girls in our lineup as far as being able to throw, run and hit — to do all of the things we need her to do. She’s been playing really good center field for us and picking up the slack in the bottom half of our lineup.”

Smith also had plenty of success at the Jackson Tournament as she had multiple hits in three of the four games. Jacie’s best outing was in Notre Dame’s 14-run win over Lutheran South, where she had two hits, four runs batted in and scored two runs of her own.

The youngster Smith had not one but two two-run doubles, and she recorded both through the first two innings of play. Six other Bulldogs had multiple hits against Lutheran South as well as senior short stop Kadi Dohogne, senior catcher/third baseman Ainsley Burnett, senior left fielder Emma Steimle and senior right fielder Ali Ziegler each produced three hits of their own.

Ziegler finished behind Smith in RBIs with three of her own, while senior first baseman/pitcher and Southeast Missouri State verbal commit Hailey Burnett also drove in three runs.

On the rubber, Burnett produced four strikeouts through three innings pitched, while sophomore pitcher Taylor Kutz had four Ks of her own in two innings.

In Notre Dame’s closest game of the Jackson Tournament versus Richmond, senior Halle Ressel was on the mound for the Bulldogs as she recorded a game-high six strikeouts.

Also producing offense in a one-run affair for the Bulldogs was Dohogne with one hit and one run scored, while Smith had an RBI.

Versus Neelyville, Hailey Burnett led the way with four hits and two RBIs, while Smith had two hits, two runs scored and one RBI. Dohogne and Ziegler also had two hits of their own, while Kadi scored two runs and Ali drove two in.

Ainsley Burnett also drove in one run and had a hit as Hailey Burnett had quite the day on the rubber by recording seven strikeouts and only allowing one earned run through six innings.

Burnett has been Notre Dame’s top pitcher statistically with an overall record of 8-1, a team-high 43 strikeouts and a .98 earned run average. Ironically, Hailey has recorded her season-high strikeout total of seven versus Neeyville both times the Bulldogs have faced them (Sept. 6 and Saturday).

“Hailey was hurt a little bit last year and didn’t get to pitch as much, but it’s nice knowing you always have someone like Haile in your back pocket,” Coach Graviett said. “Taylor Kutz has done great when we’ve used her this year, too. Having three pitchers you can trust at the high school level in softball is a big deal.”

Offensively versus Ft. Zumwalt West, both Ainsley and Hailey Burnett had two hits and one run scored, while Ainsley also had an RBI. Smith recorded two hits of her own with an RBI and scored one run.

Dohogne finished with a team-high two RBIs off one hit and also had one run scored. Ziegler also filled the stat sheet with one hit, one RBI and one run.

Notre Dame has two more weeks of the regular season left to play before the start of the Class 4 District 1 Tournament. The only team the Bulldogs don’t have more wins than in their district is Farmington (18-8), which they fell to 2-1 on Sept. 17.

“I think we play better, and I think we have to find ourselves defensively,” Coach Graviett said. “… I’ve been proud of our senior leadership. We do a good job of not panicking and have the mental focus of, ‘We’re going to win this thing.’”