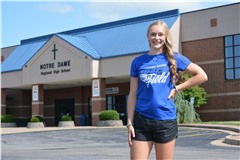 The 2019-20 high school sports calendar may have been cut short due to the coronavirus pandemic, but nonetheless The Cash-Book Journal is still going to recognize the top talent from the area.

Jackson, Notre Dame, Oak Ridge and Saxony Lutehran’s athletic directors selected one female and one male to be named as members of the 2020 All-CBJ Team, who were then put in the running for The CBJ’s two Athlete of the Year spots.

Brune and Layton are the first athletes to ever be named All-CBJ multiple times.

Burger and Brune were selected as the two CBJ Athletes of the Year. Burger was a three-sport athlete (softball, basketball and track and field) for the Bulldogs, while Brune participated in two sports (basketball and soccer) as a Crusader.

Burger won two Class 4 State Championships as a jumper to bring her total of individual career state titles to four in her final season with Notre Dame’s track team.

As a member of Saxony soccer, Brune was named the Missouri High School Soccer Coaches Association’s Class 1 Player of the Year for the third time in 2019 — becoming the first girls soccer player to accomplish this feat.

Both will continue their athletic careers at the next level as Burger will jump for Louisville’s track and field team, while Brune is set to join the Southeast Missouri State soccer team.

Each All-CBJ Team member will have a feature story about them in the coming weeks starting on July 15.