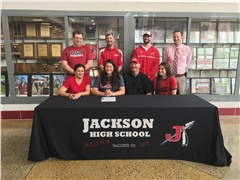 Senior Nicole Humphreys is currently competing in her final season as a thrower with the Jackson track and field team, but she just signed her National Letter of Intent with Southeast Missouri State on April 27 to throw collegiately.

Humphreys stated that she had a few other colleges recruiting her before making her decision to sign with Southeast and even visited Missouri Southern State and Lindenwood.

“When I went [to those schools] to visit, I felt like [they weren’t] as compatible with me as SEMO was,” Humphreys said. “When I visited SEMO, it just felt so homey.”

Humphreys said the throws coach at Southeast, which happens to be five-time Ohio Valley Conference Coach of the year Eric Crumpecker, Southeast’s head coach, is almost exactly like her throws coach at Jackson connection wise.

“[Crumpecker] is going to continue coaching me to what I understand the most, which will really help me excel in it,” Humphreys said. “This will be the first time I train specifically for track because I’m in both basketball and track in high school, so I haven’t really gotten to dedicate a full year just to track, and I’m really excited to be able to see what I can do.”

In his time at Southeast as a coach, Crumpecker has individually coached 78 OVC Champions, 37 regional qualifies and seven NCAA National Championship qualifiers.

Even before signing with Southeast, Humphreys was offered a scholarship by Missouri Southern State, but she felt Southeast put forth more effort to sign her.

Southeast’s campus is only 11 miles away from Jackson, but Humphreys said she and her friends are all going their separate ways.

“I’m going to miss the camaraderie we have, and there’s such a level of school spirit [at Jackson] that I hope SEMO has, too, but I’ll miss the Jackson school spirit.”

Humphreys explained she learned adversity during her time at Jackson by dealing with injuries in track as well as throwing in the rain and cold.

Last season, Humphreys placed ninth in discus at the 2016 Class 5 State Championship meet with a heave of 122 feet, eight inches, and won two championships in the sectional meet in both discus and shot put. She also won discus and shot put at the Class 5 District 1 Meet as well as the SEMO North Conference Meet her junior season.

As a member of Jackson’s basketball team, Humphreys has played a total of 74 varsity games since her sophomore season. In her final season this year, she shot 51 percent from the field, averaged 2.1 rebounds per game and was third on Jackson in blocks with seven.