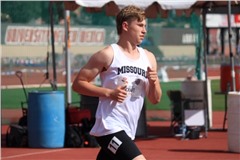 Three track and field athletes from Southeast Missouri were invited by the state selection committee to compete in this year’s Great Southwest Classic on June 6-8 hosted at the University of New Mexico.

Those three athletes were Caleb Craft of Jackson, Bri Jenkins of Saxony Lutheran and Eric Roth of Perryville as members of Team Missouri. Craft and Roth both competed in the two-day decathlon, while Jenkins was in the women’s heptathlon.

Roth, who has signed with New Mexico Community College to continue his track career, was able to finish in the top 10 in the decathlon by placing third overall with 5,797 points. He won the decathlon 110-meter hurdle (15.03 seconds) and javelin event (152 feet, seven inches), while placing second overall in the 400-meter dash (51.95).

Craft placed 13th overall out of 17 competitors in the event with 4,776 points despite injuring his tricep and hip. He took third in shot put (40-02) and seventh in the 400 (53.98) among decathlon participants.

Jenkins also took 13th place for Team Missouri in her respective competition as she scored 3,776 points in the heptathlon. Among fellow heptathlon participants, Bri took third in the 200-meter dash (25.7) and eighth in long jump (16-10.75).

Winning this year’s decathlon event was Miles Wilcox of Team Utah with 5,943 points, who placed in the top five of eight events including a first-place finish in shot put with a 45-2.5. He is committed to the University of Utah.

Jenkins officially signed with the Maryville University of St. Louis before the start of her final track and field season at Saxony, where she was a four-time Class 3 All-State honoree.

The boys squad for Team Missouri won the Classic for the second-straight season with a score of 187.5 to runner-up Texas’ 131. The women’s team also came away with a first-place finish with 211 points as Arizona finished second at 150.

Both Missouri teams combined for a total of 22 events, including Hazelwood West’s Justin Robinson winning the overall 400-meter dash event with a time of 44.84. This is the top time out of all high school runners.

Robinson also helped his high school win this year’s Class 5 State Championship as he also won individual gold medals in the 100, 200, 400 and as a member of 4×200-meter relay team as a junior.