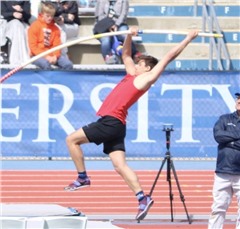 It was a historic meet at this year’s Kansas Relays for the Jackson track and field team’s senior pole vaulter Jack Rinehart, who broke the program’s record vault to place second in the event.

Rinehart recorded a vault of 15-feet, eight-inches to set a new program-high as well as topping his previous personal best of 15-3.

The record was previously held by Dillon Rush and Lane Lohr. Lohr went on to compete in the Olympic Trials later in his career and nearly made Team USA.

“This is a highly competitive and prestigious meet that attracts the top track and field athletes from all over the Midwest,” Jackson head coach Jim Stoverink said. “They only allow a certain number of athletes to be entered in each event, so coaches submit entries and then the meet organizers only invite the top performers to come and compete. Just to get accepted into the Kansas Relays is a huge accomplishment.”

Rinehart was not the only Indian to place in the top 10 since fellow pole vaulter junior Erin Huff did so in her respective event with a vault of 10-6 to tie for 10th place. Cape Notre Dame senior and Louisville signee Carly Pujol took third in the event with a 12-0.

The final top-10 finish at the Kansas Relays for Jackson was in the girls 4×800-meter relay by a team comprised of seniors Kennedy Bauer and Kaylee Wilson, along with junior Ashlyn Prince and freshman Layla Fliege. The team finished ninth overall with a time of 10 minutes, 2.07 seconds, which was also the best time of the season for this relay team.

On the track for the boys side, the 4×400 team recorded a season-best time of 3:31.13, which placed them 28th overall in the event. The team was made up by juniors Aaron Brown, Caleb Craft, Ethan Walz and sophomore Daniel Dickerson.

Prior to this meet, Jackson competed in the 60th Annual Capital City Relays, the same site as the state meet. The boys team finished sixth overall (48 points), while the girls team took seventh (43).

Next up for Jackson is the SEMO North Conference Meet this Saturday at Notre Dame, where both teams finished second behind Poplar Bluff last season.

Brown, junior Donya Marx and Rinehart all won individual conference championships last year, while Bauer and Wilson did so as well along with the 4×800 team. The team included Prince and Wilson.