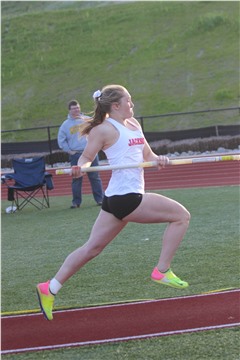 This idea of thinking has led Schumer to tying the top pole vault in the state with a leap of 12 feet, six inches at the Poplar Bluff Invitational.

Schumer’s jump won her the event, which was one of the five events Jackson’s girls team won to place third with a score of 110 at the invite. Sophomore Erin Huff came in second behind Schumer with a jump of 11-0.

The rest of the first-place finishes came on the track as junior Kennedy Bauer won the 1600-meter and 3200-meter run for a combined 20 points.

Sadler and Wilson were also a part of the first-place 4×800 team along with senior Margo Motes and sophomore Ashlyn Prince, which recorded a time of 10:07.15.

Junior Jackson Rinehart took first in pole vault with a leap of 15-0, which ties him for fifth in the state.

Next for both teams is the annual SEMO North Conference meet on Friday.