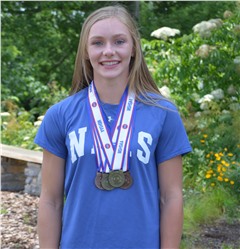 Coming in to Notre Dame Regional High School, junior Riley Burger did not ever think she would one day be a four-time state champion jumper for the track and field team. This was because she thought she would try out for the team as a runner instead.

One day during lunch hour in the gym, Burger’s classmates were egging her on to “get rim,” and she did just that. Boys basketball coach Paul Unterreiner took a video of Burger doing this.

This led to Burger being a part of the senior physical education course, and one day during the classes’ track session she broke the school record in long jump barefoot.

Burger first discovered she was a talented jumper back when she was a gymnast as a little kid. She actually did not know jumping was included in track and field because she thought it was just running.

Fast forward to today and Burger is now a three-time Class 4 State Champion triple jumper and also came away with the state title in long jump this year. She defended her throne in triple jump with a mark of 39 feet, three and a half inches, which was more than 2-feet longer than the meet’s runner up.

Burger took fourth place in last year’s long jump event, but she finished 6.5 inches ahead of everyone else this year at 19-7.5. This also happens to be her personal best long jump and the Notre Dame record.

Burger also took home state medals in two other events as she placed fourth in the high jump (5-5) and fifth as a member of the 4×200-meter relay team (1:44.87). In high jump, she was only three inches behind first place, while the relay team was 3.89 seconds from first.

“Since freshman year, Coach [Ryan Long] has said, ‘We need that triple crown. Let’s go for it,’” Burger said. “I never really actually thought, ‘Yeah, I’m doing that,’ because freshman year I didn’t get high jump down well. I was struggling on some things, but going out this year I thought, ‘Yeah, that’s something I want to do.’”

Burger said this year’s high jump was one of the more competitive events at state with the winner posting a jump of 5-8. Last year’s winner recorded a jump of 5-3. Burger knows she is capable of reaching that height, but she said she just needs to focus on her form to get the technique right.

“It was great to see competition like that, but in long jump and triple to be able to win both of those was a great thing,” Burger said. “Even in long, I was sitting in first and then a girl came back and jumped about four inches further than what I had. That motivated me, and I ended up [setting a personal record].”

Burger’s performance at state helped Notre Dame take fifth overall with 37 points, which is the highest spot the girls team has ever placed. The only other individual for the Bulldogs to place at state was senior Carly Pujol, who took second in pole vault after winning the title last year.

“It meant a lot [to place fifth] — everybody chipped in and everybody did their part this year,” Burger said. “Just to bring that many people to state was a good feeling.”

“When a jumper has a good jump, you feel it before you see it,” Burger said. “You kind of just know that it’s a good one, and I had that feeling. I just knew it was like, ‘Whoa, that felt really good.’ Being able to start [my junior year] off with a jump like that was really motivating and exciting for me to know, ‘Hey, throughout this year I can do this.’”

Looking back at Burger’s freshman year when she won her first state championship, she said it was a great experience not only because of winning the title but also because of the friendships she made at that meet.

“I still have so many friends from that first state meet,” Burger said. “Anna Moore is in my grade and she’s from [Kirksville] — every year I’ve seen her and every year we build our friendship. On the competition side, it was just great to go out and compete.”

It is safe to say winning that state title lit a fire under Burger, who after the meet remembers saying, “I want four of these.”

One way Burger has been training for jumping is with Project Triple Jump, which she has been able to do after competing in the Great Southwest Classic in New Mexico the summer after her freshman season.

This is where Burger was discovered by the National Scholastic Athletics Foundation Project Triple Jump Coordinator Macka Jones. One of the college coaches in attendance who knew Jones well told him he needed Burger in their project.

The project currently has eight triple jumpers from the United States train with other jumpers around the world, like 1996 Olympic Gold Medalist Kenny Harrison. He set the Olympic record for triple jump to win the gold with a leap of 59-4. Burger has also spent time in Cuba to train.

“It’s really cool training, but as you’re doing it you realized they had hard times they went through — exactly what we’re going through right now,” Burger said. “They really know how to work with you to push through it. … It’s neat to be with somebody of that caliber who has done that.”

On top of being a state champion jumper, Burger is also a member of the Notre Dame basketball and softball teams. She earned all-state in softball this season and also helped the program to back-to-back Final Four appearances her first two years.

When asked how many colleges were recruiting her, Burger replied, “Quite a few. I definitely have a lot of thinking to do. I still have no idea what I want to do or where I want to go.”