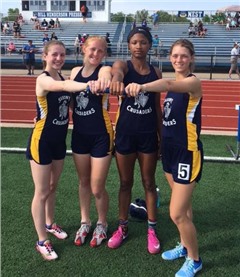 The Saxony Lutheran girls track and field team placed third in this year’s Class 2 Sectional 1 Meet with a score of 69 while the boys team finished 11th with 29.

Combined, Saxony qualified for the Class 2 State Championship Meet in a total of 12 events with the girls qualifying in eight.

Junior Macy Morehead claimed gold in the discus throw with a heave of 115 feet, three inches and claimed third in shot put (36-1).

Junior Briann Jenkins will be competing in four of those events for the girls team as she placed in the top four of three individual events and as a member of the 4×400 relay team.

The girls 4×400 team earned a second-place finish to qualify for state as senior Ashley Fritsche, Jenkins, junior Khloe Koch and sophomore Clara Yokley combined for a time of 4:16.73.