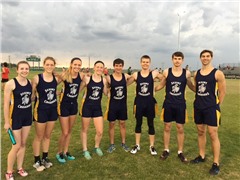 The Saxony Lutheran girls track and field team placed the highest it has all season by taking second overall out of 12 teams at the Riverbend Invitational on April 20 at New Madrid County Central.

The girls 4×400 meter relay team compiled of sophomore Khloe Koch, freshman Clara Yokley, junior Laurel Mueller and junior Ashley Fritsche finished the race with a time of four minutes, 38.14 seconds for the only first-place finish in the track events.

On the field, sophomores Courtney Bangert and Macy Morehead took first in their respective events. Morehead had a heave of 109 feet, four inches for a personal record in discus while Bangert leaped four feet, eight inches in the high jump.

Morehead actually set her personal record the week before in discus at the Johnny Merrick Invitational where the team took eighth place on April 10 with a 107’ 5 1/2” throw, which placed her second.

All three second-place finishes at the Riverbend meet were in the running events with Koch taking second in the 400-meter run with a time of 1:06.21.

Richmond was also a part of the 4×800-meter relay team that was the final second-place team in the Riverbend meet, which finished with a time of 12:44.09.

This team was also compiled of senior Rachael Koehler, senior Alexis Goodson and freshman Joanna Shaw — the same team that placed fifth at the Johnny Merrick invite with a 12:48.53.

Morehead also placed in the top three in another event at the Riverbend Invitational meet with a 30-2 throw in the shot put event.

The boys team ended up nearing the top five of the Riverbend meet by placing sixth overall out of 12 teams with 42 points.

Saxony’s boys team did not come away with a first-place finisher and had one second-place finish with two finishes at third and two at fourth place.

The only second-place finish for the boys team was junior Trae Robinson in discus with a throw of 120-4. Robinson placed fourth in the team’s meet at Kelly as he had a 117’3” discus throw.

At the Johnny Merrick Invitational, Robinson also competed in shot put and finished seventh with a throw of 38.1.

One of the two third placers for Saxony’s boys team was in the field events when senior Nathan Schneider recorded a shot put of 41.7.

The other third place finish came in the running events when the 4×400-meter relay team recorded a time of 3:51.31.

Taking fourth on the track for the boys team was the 4×800-meter relay team, which also consisted of Hyatt and Ruark to finish with a time of 10:21.29. The other two runners who made up the rest of the team were sophomore Micah Mirly and freshman Sam Varner.

Schneider finished two spots behind Robinson at fourth place in discus recording a throw of 108-4.

The next meet for both teams will be the Cape Notre Dame Open on Wednesday, April 26 at 4 p.m. The Crusaders will then compete in the Red Devil Invitational the next day in Murphsyboro, Illinois.

That will be the last meet of the regular season with SEMO Conference Meet after the Red Devil meet, which will be on May 2.

The Class 2 District 1 Meet is on Saturday, May 6, and will be held at Cape Central High School.