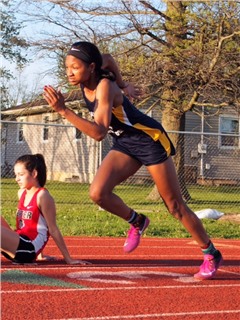 This was over a week after the team won the SEMO South Conference Championship, topping second-place Dexter with a score of 132 to the Bearcats 116.

One of her championships came in the field events as she won long jump with a leap of 18 feet, one inches. She then won the 200-meter dash on the track with a time of 25.7 seconds.

At conference, Jenkins was victorious in the 100-meter dash, the 400-meter run and the long jump.

Jenkins won her third and final district championship as a part of the 4×400 team, which won its race with a time of four minutes, 22.23 seconds.

Accompanying Jenkins on the team is senior Ashley Fritsche, junior Khloe Koch and sophomore Clara Yokley. The girls 4×400 team also won its race at conference without Jenkins as it was freshman Sydney Turner in the No. 2 spot instead.

Yokley claimed district gold as an individual in the 800 with a time of 2:35.72. She placed second in the 800 at conference, but gained first place in the javelin throw with a mark of 107-9.

Also claiming district gold for the girls team was junior Macy Morehead, who recorded a heave of 111 feet, nine inches in the discus. Morehead placed second in shot put behind St. Vincent senior Jackie Verseman (37-7) with a throw of 34-3.

Morehead won both the discus and shot put events at conference as she recorded a throw of 109-9 in discus and 35-11 in shot put. Morehead finished second behind Yokley in the javelin at conference, but was also second in districts, this time one spot ahead of Yokley. Yokley finished third with a throw of 95-6, one foot behind Morehead (96-6).

The boys managed to win two events at districts as both were won by junior Caleb Cornelius, who claimed gold in the 1600 and the 3200.

There were two other conference champions for the boys team as junior Sam Elfrink won the 800 with a time of 2:11.02. Elfrink finished second in the same event at districts at 2:05.8, just .12 seconds behind St. Vincent senior Andrew Lipe.

Junior Christopher Palmer was the final conference champion for the Saxony boys as he won the javelin with a mark of 158-6. He placed third at districts with a 140-9.