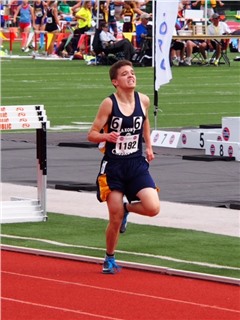 Members from the Saxony Lutheran track and field program competed in the Class 2 State Meet on May 18 and 19, but only one of them came away as a state champion.

Earning all-state honors in four events was fellow junior Briann Jenkins as she competed in the 200-meter dash, the 400, the long jump and as a member of the 4×400 relay team.

Jenkins and the rest of the 4×400 team, senior Ashley Fritsche, junior Khloe Koch and sophomore Clara Yokley, took fifth place with a time of 4:19.29.

Also earning all-state honors in more than one event was junior Macy Morehead, who finished in the top three in the discus throw with a heave of 117-03. She took eighth in shot put with a mark of 34-05.

The three other athletes who qualified for the state meet as individuals were Yokley in both the 800-meter run and javelin, junior Chris Palmer in javelin and junior Samuel Elfrink in the 800.