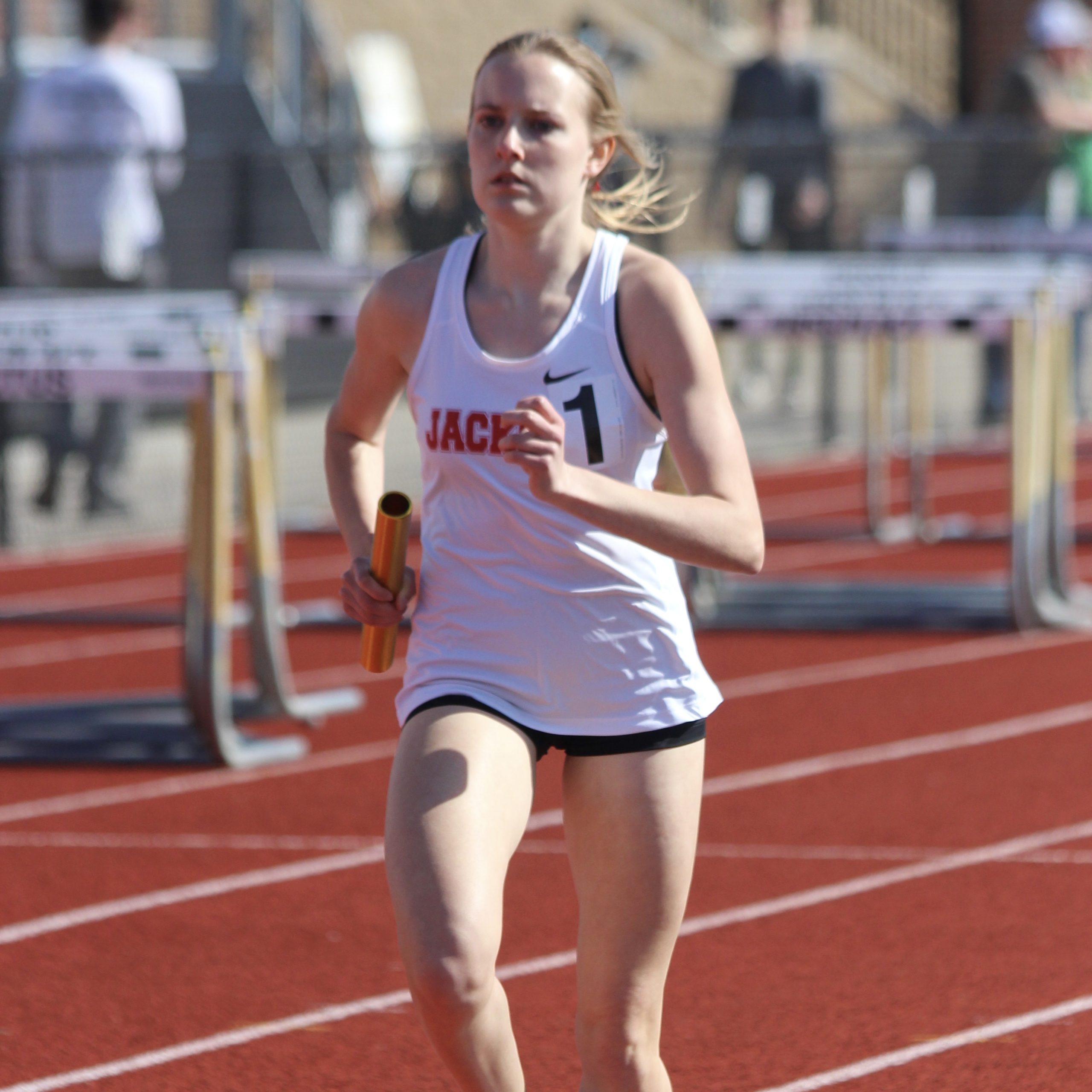 Jackson’s girls team was the only one of the four squads to place first overall as the Indians scored 128 points with a total of 13 top-four finishes. The Notre Dame girls were fifth (75) and placed in the top four of nine events.

On the boys side, Jackson finished fourth overall with 81 points, while Notre Dame took seventh at 59. However, the Bulldogs were able to have one more top-four finish with eight to the Indians seven.

Out of the Jackson girls team’s 13 top-four performances, six of those were first-place finishes as junior runners Layla Fliege, Ryleigh Kilhafner and sophomore Mallorie Metzger placed at the top of two events.

Kilhafner won the 100-meter dash with a time of 13.11 seconds, while fellow Indian senior Alexis Boyles came in two spots behind her in third (13.49).

Boyles and Kilhafner also helped the 4×100-meter relay team along with seniors Avery Bauer and Juliana Evans take first at 52.11. Boyles had another top-four finish as she took fourth place in the 200, where she finished with a time of 27.94.

As for Fliege, she took first in the 800-meter run by crossing the finish line at two minutes, 19.86 seconds, which was nearly three seconds ahead of second place.

Fliege was also a member of the first-place 4×800-meter relay team (10:05.04) with Metzger, senior Elizabeth Steele and junior Brooklyn Burgess. Individually, Metzger won the 400-meter dash as she produced a time of 1:01.24.

The final top-four finish for the Jackson girls team on the track was by junior Addie Heisserer, who placed third in the 1600-meter run (5:33.59).

Jackson’s girls finished in the top four of five field events as freshman Felicity Pingkian won pole vault with a mark of 10 feet, 1.75 inches. Finishing as the event runner-up behind her was junior Hadley Wyatt, who produced a vault of 9-5.75.

From the Notre Dame girls team’s nine top-four finishes, three of them were first place as sophomore Jenna Givens not only won the triple jump, again, but she also helped the 4×400-meter relay team take first as well.

Givens, who has won every single triple jump event she’s competed in this season, won with a mark of 35-2.75. Fellow Bulldog junior Leah Jansen finished in third place behind Givens (33-5.5).

Jansen was also a member of the first-place 4×400 team along with Givens and seniors Lauren Brown and Haley Smith. These Bulldogs won the race by 5.46 seconds at 4:14.79.

Notre Dame’s other second-place finish was by Smith in the 1600, where she crossed the finish line at 5:27.51 and was 6.08 seconds ahead of Jackson’s Heisserer.

Moving on to the boys side, Jackson’s field athletes combined for four of the Indians seven top-four finishes. Winning his event was none other than senior Rhet Liley, who won the javelin with a throw of 171-0.0. The second-place throw was 159-11.

Jackson had two second-place finishes on the field as junior Nolan Chrusciel did so in discus with a heave of 140-8.25, while sophomore Braeden Cain took second in pole vault at 12-6. Finishing two places behind Cain in pole vault for fourth place was junior Riley Russell (11-11.75).

The lone win on the track for the Indians was by their 4×800 team made up by senior Clayton Greenlee, sophomore Cole Puls and freshman Zach Brazel and Bryce Gentry. These Jackson boys runners combined for a time of 8:27.43 to place first.

Greenlee also placed in the top four individually as he took second place in the 3200 with a time of 9:52.47 in the same event sophomore Hunter Wendel finished fourth overall at 10:15.7.

The Notre Dame boys team only had one first-place finish as it was the Bulldogs 4×400 team that did so by crossing the finish line at 3:33.03. This team includes seniors Evan Bruenderman, Hayden Jansen, junior Caleb Garner and sophomore Cole Bruenderman.

The Bruendermans also placed in the top four of an event individually as Cole took second in the 100 (11.43), while Evan finished fourth in the 200 (23.46). Placing two spots ahead of Evan for second place in the 200 was fellow Bulldogs senior Hayden Jansen (23.08).

Cole Bruenderman had another top-four finish as he placed fourth in triple jump with a 39-7.25. Notre Dame senior Zach Bleckler placed second in triple jump (40-6.25), and he also took fourth in long jump (19-6.75).

The final Bulldog to place in the top four for the boys team was sophomore Gregory Dennis in high jump, where he made a leap of 5-7.