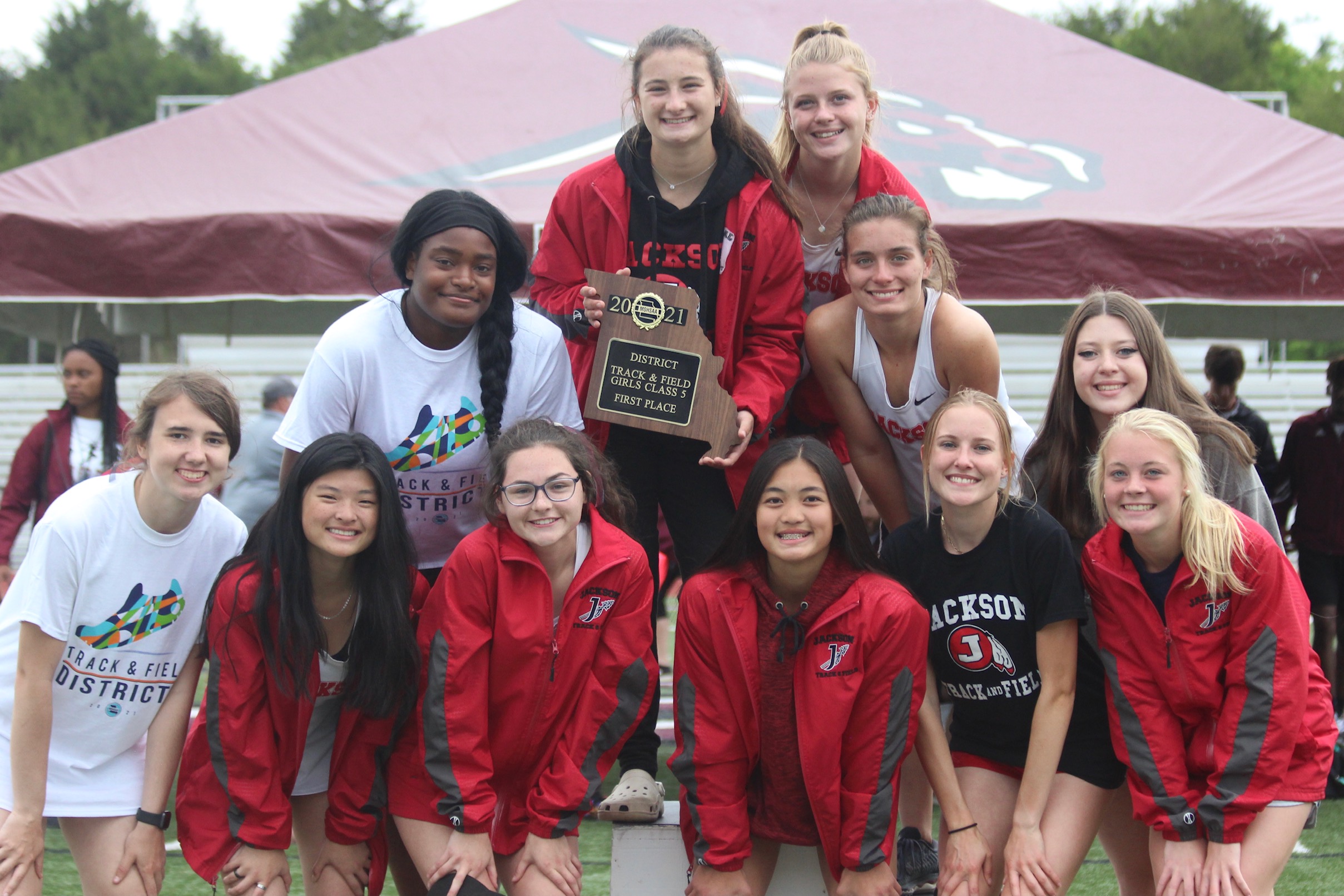 Members of the Jackson girls track and field team pose with the Class 5 District 1 Championship on Saturday at Poplar Bluff. Photo by Andrea Talley

On Saturday, the Jackson girls track and field team was able to come away with its first district championship since 2016 as the Indians scored a meet-high 184.5 points and won seven events.

The district runner-up Lindbergh finished 73 points behind Jackson at 111.5. The Indians placed in the top four 22 times to qualify for sectionals in 15 events on Saturday.

Taking gold in three of those events for the Jackson girls team was none other than junior Layla Fliege, who became the Class 5 District 1 Champion in the 800 (two minutes, 21.5 seconds) and 1600-meter (5:15.34) runs. Fliege was also a member of the first-place 4×800-meter relay team (9:53.01) with juniors Brooklyn Burgess, Addie Heisserer and sophomore Mallorie Metzger.

Like Fliege, Metzger won an individual district title of her own by taking first in the 400-meter dash with a time of 1:01.29. Metzger also qualified for sectionals by finishing second behind Fliege in the 800 at 2:24.18.

The final track event the Indians girls team won a district championship in was the 4×100-meter relay race. Jackson’s 4×100 team made up by seniors Avery Bauer, Alexis Boyles, Juliana Evans and junior Ryleigh Kilhafner won the event with a combined time of 51.59.

Moving on to the field events, not only did Bauer help the girls 4×100 team win a district title, but she also claimed gold herself in the triple jump. Bauer did so by recording a leap of 34 feet, 11.25 inches to win her very own individual district championship. Jackson freshman Megan Berger placed second behind Bauer in triple jump at 34-3.5.

Bauer didn’t stop there, though, as she also qualified for sectionals in long jump, where she took third place with a jump of 16-3.

Another Indian to take first in the field events was fellow senior Lisken Glass, who won the shot put with a heave of 34-3.5. She also qualified for sectionals in discus by taking fourth (102-7) as sophomore Briaysia Purl placed ahead of her at third (104-2).

Sophomore Stormee Rutherford will also compete at sectionals in shot put as she was the runner-up behind Glass at 31-3.25.

The final two athletes for Jackson’s girls team to place in the top four and move on to sectionals were freshman Felicity Pingkian and junior Hadley Wyatt in pole vault. Pingkian took second with a vault of 9-5.25, while Wyatt finished third overall with the same mark.

As for Jackson’s boys team, the Indians finished 57.5 points behind district champions Poplar Bluff (202.5) with a team score of 145. The Indians won three gold medals and placed in the top four of 12 events 15 times to qualify for sectionals.

The majority of Jackson’s individual district championships were on the field as senior Rhet Liley and sophomore Tony Terry won their respective events. The Missouri Science and Technology signee Liley won the javelin with a throw of 170-7, while Terry took first in shot put at 45-11.25.

Indians sophomore Conner Matthews was the runner-up in high jump with a leap of 5-9.75, while junior Joshua Wehrenberg placed fourth overall in the triple jump (38-10.25).

The lone district champion on the track for Jackson’s boys team was won by junior Javin Hitchcock, who took first in the 100 with a time of 11.61. Senior Daniel Dickerson placed second behind Hitch-cock in the race at 11.8.

Hitchcock qualified for sectionals in the 200 as well with a second-place finish (23.39), while he, Dickerson, Wehrenberg and sophomore Marquis Eckley made up the 4×100 team that finished as the runner-up (44.81).

Four other Jackson track athletes will compete in two events at sectionals as well: seniors Jake Eastin, Clayton Greenlee, Evan Stephens and freshman Zach Brazel. These four led the 4×800 team to take second with a time of 8:22.12.