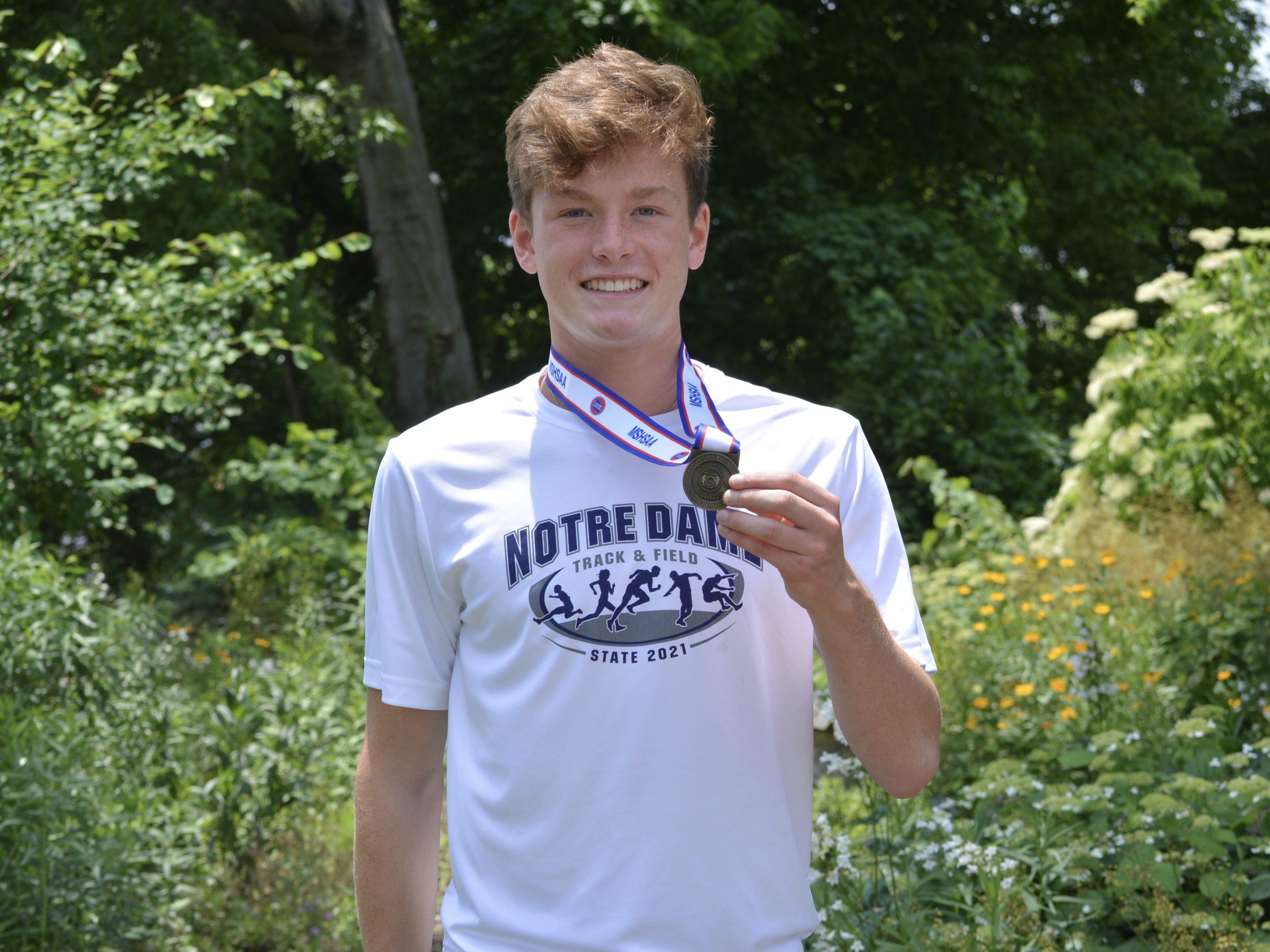 Notre Dame senior Evan Bruenderman won the Class 3 State Championship in triple jump with a leap of 45 feet, eight and a half inches on Saturday, May 29, at Jefferson City. Photo by Jay Forness

Entering his freshman year at Notre Dame, 2021 graduate Evan Bruenderman had no intentions of joining the track and field team. It was a good thing Bulldogs track head coach Ryan Long convinced Evan to do so because last week Bruenderman ended his time at Notre Dame as a state champion.

At this year’s Class 3 State Meet, Bruenderman, who signed with Saint Louis in April, competed in a total of four events and finished on the podium in each to earn an all-state medal four times. Evan took home gold in one of those events as he won the triple jump with a leap of 45 feet and eight and a half inches to fulfill his dream.

“Every day I worked as hard as I could to get better and with that goal in mind to one day be a state champion,” Bruenderman said. “It’s cool that I finally lived up to that goal, and I finally am one.”

Bruenderman missed out on the chance to achieve his goal last season since the coronavirus pandemic forced MSHSAA to cancel the 2020 spring season all together. Entering this year, Evan was a two-time state qualifier in triple jump and took fifth place in 2019 with his same mark at this year’s state meet of 45-8.5.

However, this time that leap was good enough to place Bruenderman two feet ahead of the entire field. The runner-up behind him was Versailles senior Michael Bell with a jump of 43-6.

“The triple jump was my third event that day, so I was a little fatigued from my 200 before for the 4×200,” Bruenderman recalled. “I wasn’t mentally ready to start the triple, and I needed to get some technique work in before I actually did it.

“I just stood back, did my own thing and watched everybody. I saw their marks keep coming in, and I was like ‘OK, this is very doable. I just need to go out there, do what I know I can do and compete.”

The reason why Bruenderman was fatigued after competing in the 4×200-meter relay is because he helped Notre Dame set a new school record time of one minute, 30.6 seconds in the race. Also on the team making history with Evan was his younger brother sophomore Cole Bruenderman along with junior Caleb Garner and senior Thomas Taylor.

Even though this time was a program record for the Bulldogs, Notre Dame finished fourth overall in the relay behind first-place Richmond (1:29.6), runner-up MICDS (1:30.55) and third-place Lamar (1:30.57).

“This whole season we’ve just been fine tuning all of these little hand offs and getting as fast as we can during the workouts,” Bruenderman said. “We push through them all and getting to compete with those guys at state was just a crazy moment. We pushed each other this whole season for these two races and in the end we did well.”

The fourth and final event Bruenderman competed in was long jump, where he placed seventh overall with a mark of 21-4. Claiming gold in triple jump was MICDS senior Shawn Putman at 22-4.25. Bruenderman, who broke Notre Dame’s triple jump record with a 21-6.25, said he “definitely could’ve done better” in the event.

“My past two experiences at state, I just had the triple jump,” Bruenderman said. “My mindset going into those meets was just to jump far and do this, but this year’s state meet I had three other events to worry about. I had my mind set on different things, but whenever my event was up I knew I had to focus entirely on that.”

Two other individuals for the Bulldogs were also able to earn all-state medals as senior Drew Barber placed fourth in shot put with a heave of 48-0. Winning the event was Lamar senior Rylan Wooldridge as he recorded a 53-1.75 throw.

The final athlete for Notre Dame to finish on the podium was sophomore Greg Dennis. He finished sixth overall in high jump at 6-2.25, while senior Zach Bleckler finished one spot outside of earning all-state in ninth (6-0.75).

“Our whole track team has been so close knit this season,” Bruenderman said. “We just enjoy being around each other, so when it came time for postseason, we knew we had to focus and push and support each other through it all. … Saturday didn’t go as hopeful as we planned, but we were all pretty satisfied with the sixth-place finish.”

The Bulldogs girls team competed in Class 4 this season due to MSHSAA’s new success multiplier as they only qualified for state in five events. However, out of those five events, Notre Dame’s girls team placed in the top eight three times to come away with all-state medals.

Coming away with the highest finish was sophomore Jenna Givens, who took fifth overall in triple jump with a leap of 35-5.25. This was the first time Givens was unable to win the event as she took home conference, district and sectional gold heading into the state meet.

“Coach Long has just worked with us immensely these past few months training us and doing different drills,” Bruenderman said. “He sees little things we need to improve on, which we don’t even see but he sees what we need to keep working on.”

The last athlete for the Bulldogs girls team to earn all-state was senior Haley Smith as she finished eighth overall in the 800-meter run with a time of 2:23.74.