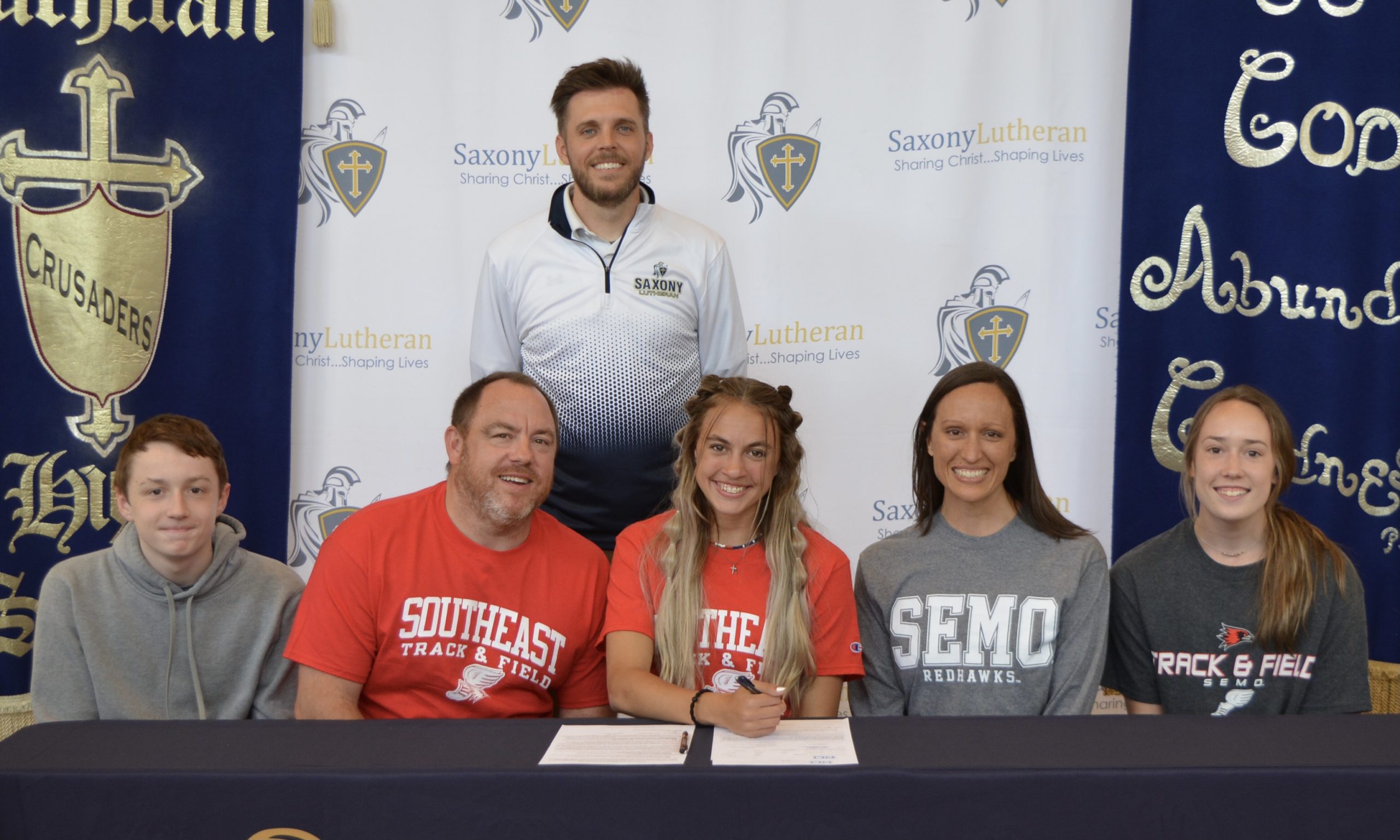 For Anna Thomason, staying busy is something she makes a point of doing. If you needed an example, just take a look at all of the sports this Saxony Lutheran senior participates in: cross country and volleyball during the fall, basketball in the winter and lastly track and field and soccer for the spring season.

Thomason explained that the only difficult time of the year for her is spring since soccer and track are two completely different sports. However, Anna said that she doesn’t mind the challenge since she always has so much fun whenever she competes in anything.

“I love being active, I love playing sports and I love beating people,” Thomason said. “I’ve grown up with three siblings, and both of my parents were college athletes. They are both really competitive, so I’ve always grown up in that type of household. We make a competition out of everything, and I love it so much. Not all the time, but the sheer competitiveness of it is so fun.”

Even though there are athletes out there who have signed to play multiple sports at the college ranks, Thomason will do so in just one: track and field. This should not come to a surprise, though, since Anna earned all-state in not one but two events and qualified for state in a total of four last spring.

At last year’s Class 2 State Meet, Thomason finished as the runner-up in high jump and helped the 4×100-meter relay team take eighth place. The other two events Anna competed in at state last season was the 200-meter dash and triple jump. Thomason also qualified for state as a freshman.

“Track meets are always so fun because it’s not just constant action — you get to go out, do your event and then cheer for your teammates while they’re doing theirs,” Thomason said. “I love the team aspect of track because even though it’s not always a team sport, it definitely is because you’re always out there for each other.”

Thomason, who growing up knew she wanted to be a college athlete but didn’t know which sport, will continue her track career at local Division-I university Southeast Missouri State. Anna is actually the first athlete from Saxony to sign with a D-I school since 2020 graduate Emma Brune did to play soccer at SEMO.

“I am just so excited — I had not expected to be a D-I athlete,” Anna admitted. “I expected to be more of a D-II or D-III, and I was going to be fine with that. Once I heard SEMO was going to offer me a scholarship and wanted me on the team, I was like, ‘Oh my gosh! Is this actually happening?’”

SEMO was not on her radar at first since Thomason was ready to “go off on her own” even though she does love Cape Girardeau. When Anna received the offer from SEMO and spent some time with some of her future teammates, though, she realized it was the school for her.

“SEMO is everything I’ve wanted in a track team,” Thomason said. “I just know the community within the team is so great because they do a lot of things together and always there cheering for each other. SEMO also has a really good track team and do well in conference, so it’s a very exciting time in the program right now.”

Thomason knows that college track will be “a whole other world” compared to what high school track is like. Anna is excited for this, of course, since she’ll be able to focus just on track while reaching her personal records in her events.

The four events Thomason is in this year individually are high jump, triple jump and the 100-meter hurdles along with being on the 4×100 team. This past weekend, Anna qualified for sectionals in all four events by winning the district championship in triple jump, hurdles, the 4×100 and by taking second overall in high jump.

At SEMO, Thomason will be in the pentathlon (100 hurdles, long jump, high jump, shot put and 800-meter run) during the winter for the indoor season. During the spring portion, Anna is going to compete in the heptathlon, which is those five events plus javelin and the 200-meter dash.

Back in April, Thomason won the inaugural Jungle Pentathlon held at Cape Central by 137 points as she took first in the 100-meter dash, long jump and tied for first in high jump. Anna also took second place in the 800.

“The Cape Pentathlon was so fun because I was so excited for that opportunity,” she said. “I didn’t even expect to do as well as I did because I knew there were going to be a lot of great competitors in it. We all didn’t even know each other, but we were cheering for each other.”