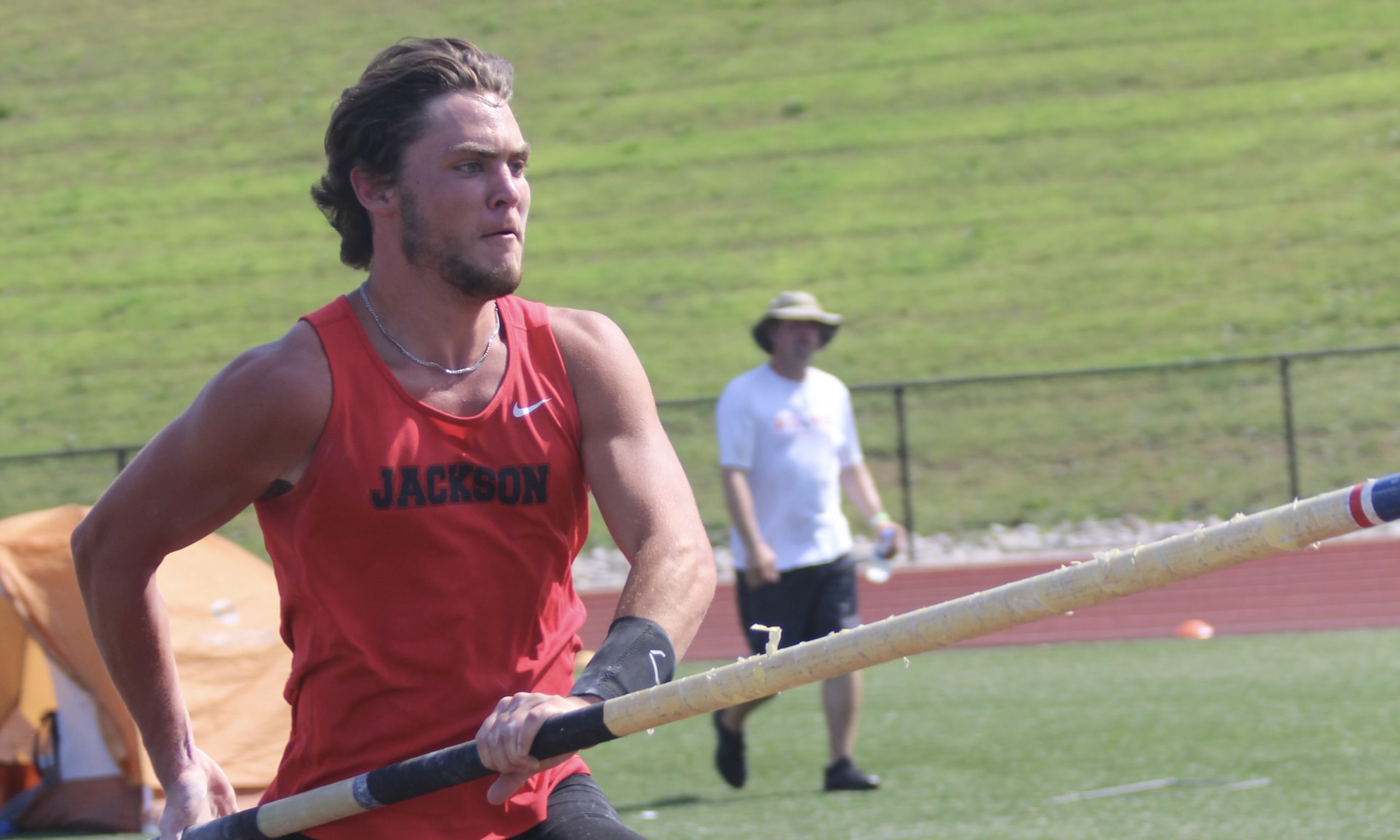 In the Class 5 State Meet held on May 27 and 28 in Jefferson City, three Indians placed in the top eight of their respective events to earn all-state medals for the Jackson track and field program.

Each state medalist came on the field for the Indians as two were from the boys team and one from the girls. Senior Collin Havill and junior Tony Terry finished on the podium for Jackson’s boys team, while sophomore Felicity Pingkian was the only all-stater for the girls squad.

Neither team finished in the top 20 as the Indians boys team took 24th place with 11 points, while Jackson’s girls ended up 37th overall (three). Rock Bridge won the Class 5 State Championship on the boys side with 97 points, while Cardinal Ritter did so on the girls side at 85.5.

Havill placed the highest out of all three Indians by taking third overall in pole vault with a mark of 14 feet, seven and a half inches, while Terry took fourth in shot put at 54-1.75. Like Collin, Pingkian also earned all-state honors in pole vault as she took sixth overall at 10-11.75.

Finishing nearly one foot ahead of Havill to win the Class 5 State Championship in pole vault was Ft. Zumwalt senior Sullivan Gleason with a vault of 15-6.5. The event runner-up was Hickman senior Charles Garino at 15-1.

This was the second and final time in Havill’s career earning an all-state medal in pole vault as he was the runner-up last year at 14-6.

The first and second-place finishers ahead of Terry in the shot put were seniors as well in Donovahn Watkins of Joplin and E’lan Moore of Lee’s Summit. Watkins won the individual state title with a heave of 61-11.5, while Moore recorded a throw of 60-8.5. The final thrower ahead of Terry in shot put to take third place was Capital City junior Sam Albert, who did so with a mark of 57-0.25.

None of the top-three finishers in the Class 5 girls pole vault event were seniors as Libery junior Rachel Homoly won at 14-0. Oakville junior Mason Meinershagen finished behind Homby at 12-1.5, while Lindbergh sophomore Kylie Scott took third place with a vault of 11-8.

The fourth and final race Fliege competed in was as a member of the 4×800-meter relay team, along with fellow seniors Brooklyn Burgess, Maite Mendez and junior Mallorie Metzger. These Indians placed 11th overall at 9:49.33, with the eighth-place time being 9:42.07.

Gibbs took ninth in the discus throw with a heave of 118-4 as five seniors finished ahead of her in the top eight, with the eighth-place mark being 119-4. Lillian also competed in the javelin throw, where she took 11th overall at 114-1 (eighth place was 119-5).

Also throwing the javelin at state with Gibbs was Jackson freshman Kimmora Carothers as she placed two spots behind Gibbs in 13th place with a mark of 104-11.

Outside of Havill and Terry finishing in the top four of their events, the next highest finish for Jackson’s boys team was recorded by sophomore Bryce Gentry, who took 11th place in the 1600 with a time of 4:24.97 (eighth place was 4:18.91; five seniors in top eight).

Gentry was also a member of the Indians 4×800 team that finished 13th overall at 8:17.72 (eighth-place time was 8:07.36). Running the 4×800 with Gentry were Jackson juniors Cole Puls, Cade McCadams and sophomore Zach Brazel.

Lastly, Indians senior Nolan Chrusciel and junior Braeden Cain both took 12th in their events of discus (157-0) and pole vault (12-5.5).