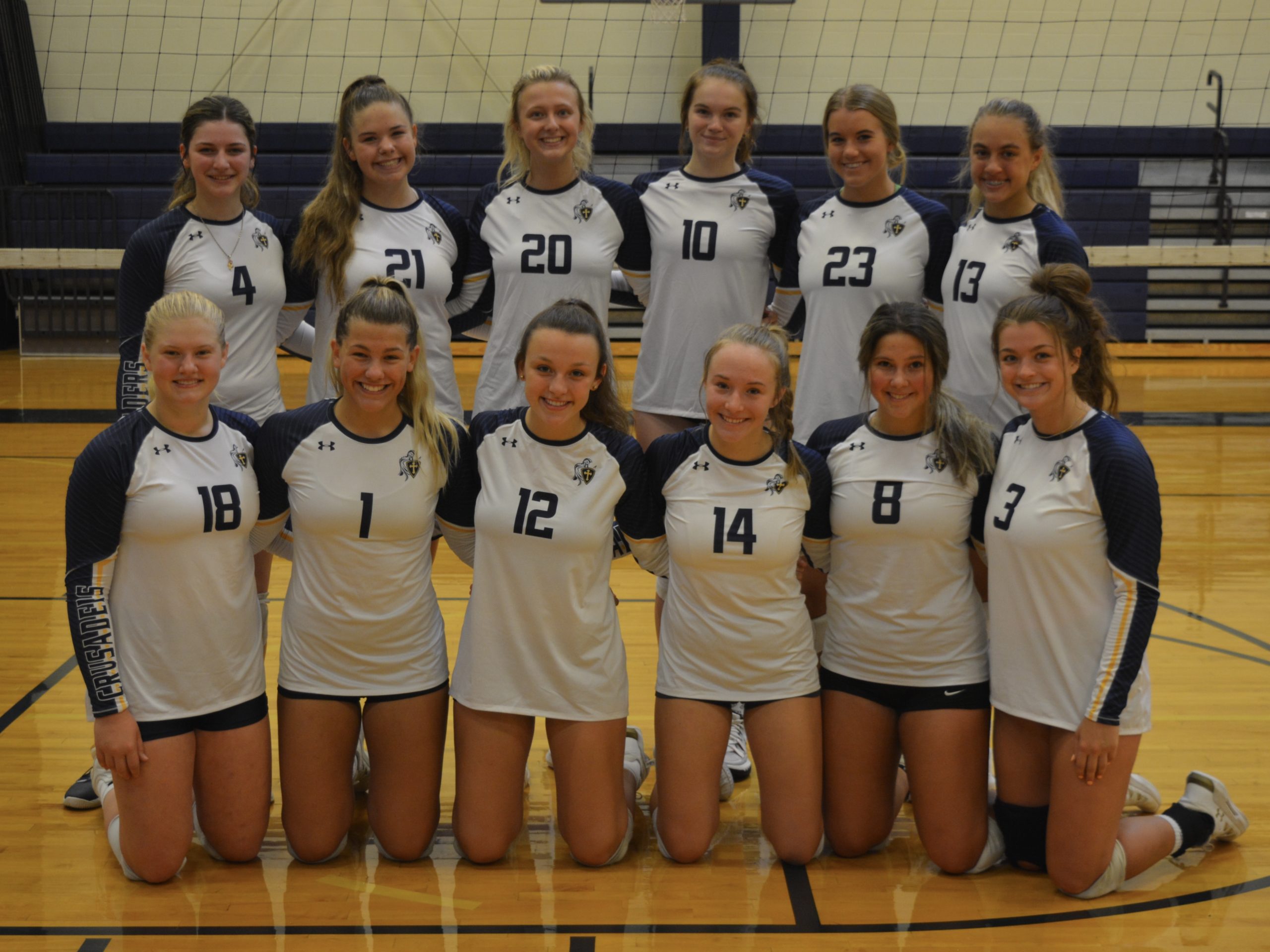 For the first time in school history last fall, the Saxony Lutheran volleyball team advanced to the Class 2 Quarterfinals after the Crusaders won their first-ever district championship.

Saxony did so in commanding fashion as the team only lost one set during the postseason up until it had to face eventual Class 2 state runner-ups Valle Catholic in the quarterfinal round.

Heading into this fall, the Crusaders are hoping to build off that as they only graduated one starter from last year’s squad in hitter Abigail Thomason.

“I feel like we’re going to be even stronger than we were last year,” Saxony’s third-year head coach Emily Wahlers said. “Of course, our competition is going to increase also.”

While Saxony brings back all but one player from last year’s varsity roster, it has also moved up some of the players from last year’s junior varsity team. These youngsters will hope to have an immediate impact.

Before we get to them, the Crusaders bring back some special talent from their historic campaign like last fall’s leader in kills senior Lauren Barnes. She was able to record a team-high 232 kills (33.7 kill percentage) at her outside hitting position, while she also finished second in digs with a total of 247.

“[Barnes] is the team. She’s rallying behind them, talking to them and trying to organize things, so you can tell she’s the leader,” Coach Wahlers said. “They look to her. There’s other senior leaders in other areas of the team, but she’s so fired up for this year. The whole team is.”

Along with that, Barnes was also second in aces at 26 behind fellow senior Rylea Lohmann, who produced 32 along with having 131 digs. Leading Saxony in digs was none other than the team’s returning starter at libero junior Anna Mueller as she came up with 266.

“[Mueller] is being a good leader on the court as far as the defense goes,” Wahlers said. “She’s a spit fire. She doesn’t like it when balls hit the floor, which is why she’s my libero. Having all of these girls come back for another year is just phenomenal.”

Other returners to the Crusaders front row include seniors Carly Summers and Anna Thomason, who combined for 217 kills with 109 and 108, respectively. Summers finished with a kill percentage of 31.6%, while Thomason ended up at 29.5%.

Thomason will be playing once again at middle hitter, while junior Josey Wahlers will help fill the middle spot as well. Summers will continue to play as an outside hitter.

Replacing Anna’s older sister Abigail Thomason at outside hitter will be sophomore Clara Brune, who primarily played on the J.V. team last fall.

“[Brune] is a lefty coming in to play right side, and she can flat out put the ball away,” Coach Wahlers said. “She’s got a great vertical and works hard in the offseason. She’s just an all-around athlete.”

Two other sophomores who are hoping to make an impact this season will be setter Landre Hoehne as well as Grace Ozark, who can play either hitting position. What Wahlers likes about this year’s group is each player’s ability to fill multiple positions.

Also stepping up from last year’s J.V. squad will be junior Emma Hinze, who has proved to Coach Wahlers to be a valuable defensive specialist in the back row.

With all of these returnees as well as new faces on the roster, Coach Wahlers said the team chemistry already started to develop throughout the summer into what it is now.

“We get so excited over a kill. They are yelling and screaming [for each other],” Wahlers said. “[The younger girls] bring a lot of enthusiasm, so they’re talking so much that they’re pushing some of our older girls who don’t talk as much to talk more. It’s been a nice combination.”

Over the summer, Saxony played in tournaments in Cape Girardeau, Dexter and Farmington, where Coach Wahlers said she was trying out different lineups for each game. The Crusaders won the tournament in Dexter and made it to the finals at Cape.

“[Rearranging the lineup] helped me find people to fill positions that I didn’t even know that was their gift,” Coach Wahlers said. “I’ve been able to switch players around and put them in a position they haven’t done in a few years, and it’s just clicking.”