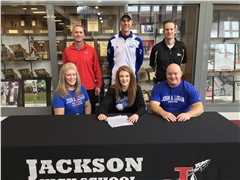 Jackson senior Olivia Hallet of the volleyball team will play collegiately next year at John A. Logan Community College located in Carterville, Illinois.

Hallet made it official when she signed her National Letter of Intent on Nov. 15 following a senior season where she was named the SEMO Conference North Player of the Year.

“It was an amazing year,” Hallet said. “We surprised him, we surprised ourselves, and I couldn’t have asked for a better year. I couldn’t have done it without my teammates, and I’m just humble to be able to have this experience in my life.”

Hallet continued to say she and her teammates knew it would not be an easy task to defeat Notre Dame in the championship game, but the Indians want for the conference title allowing them to succeed in the end.

Hallet finished her senior season with an average of 4.6 kills per game with a kill percentage of 0.33. She also ended the year with a 96 percent serve percentage off a total of 319.

Hallet was informed of John A. Logan by her Coach Mirly, who had three previous players from Perryville sign with the college to play volleyball.

Coach Mirly said Hallet signing with John A. Logan is “icing on the cake” after the season Jackson had because of how hard the team worked.

“She went from a role player last year to conference player of the year this year,” Mirly said.

Hallet agreed instantly with Coach Mirly that John A. Logan was a good fit for her once she visited the campus.

Hallet actually practiced with the team during the morning the day of her visit, and she noted all the players welcomed her instantly.

Before signing with John A. Logan, Hallet was hoping to play for Southeast Missouri State, but she said she was too late in the recruitment process to be able to.

Hallet now has two years to be able to continue to showcase her ability on the court before attending a four-year school, which is what she is striving for.

“I am going to push myself as hard as I can to improve my skill level and then be on top of recruitment for four-year universities,” Hallet said.

Hallet said she knows the transition to college from high school will not be an easy one, especially because of the people she will be leaving behind including her friends and coaches.

During her time at John A. Logan, Hallet will be studying elementary education so she can eventually become a pre-school teacher.

Hallet realized she wanted to take this route during her last four years in high school because of her love for children, so she wants to be able to help, interact with and teach them new things.