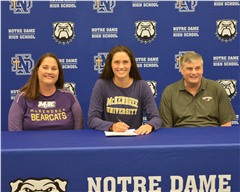 Clark suffered a torn ACL in the third day of practice  of her senior volleyball season with Bulldogs this past fall, who captured the 2018 SEMO Conference Tournament Championship with Clark leading the way. Clark was named the SEMO Conference North Hitter of the Year and also helped Notre Dame reach the Class 3 District 1 title game that year.

“[Missing] my senior year was very hard — it was not what I was expecting,” Clark said. “I had to learn how to have an impact in a different way. I had to be supportive on the bench and try to help the girls like, ‘Hey, maybe you should do this.’

“It was definitely a learning experience, and it did suck, but I don’t think I’d want it any other way. I think it was meant to be.”

Clark had surgery to repair her ACL the first day of her senior year back in August with a nine-month recovery period until she was fully cleared to return to competition. However, the world had different plans.

“Then COVID happened, so I haven’t been able to get back to the court fully,” Clark laughed during an interview in June. “My club practices up in St. Louis start in a couple weeks, and I’m super excited to get back.”

Clark went into the rehab process with the mentality that her ACL tear was not going to bring her down. Clark said she has witnessed athletes not return from the injury, but she knew her volleyball career was not over.

Clark has already prevailed and without a senior campaign, she was still able to catch the eyes of McKendree University’s coaching staff by sending them her highlight tape. Clark officially signed her national letter of intent with the program in June.

“It meant a lot [to sign with McKendree],” Clark said. “I’m really excited for this big chapter in my life — the next step. Just being able to go into a program that’s doing so well and has such great coaches with a tough mentality who are really supportive both on and off the court.”

As a member of the Great Lakes Valley Conference in Division-II, McKendree’s volleyball team finished 14-15 overall and held a record of 7-8 in conference play during 2019.

Clark’s volleyball career started back in sixth grade after her mom, Stephanie, encouraged Alexa to try the sport out. Clark was not too enthused at first by telling her, “No, mom. I don’t think I’d be any good, so I don’t think I should.”

Clark’s mom told her to at least attend the first practice to see how she felt about volleyball, and Alexa has loved it ever since.

Clark’s passion for the game grew her eighth grade year when she attended camps during the summer because she wanted to take her game to another level. It was during Clark’s freshman season at Notre Dame when she decided to pursue playing at the college level.

Clark said the Bulldogs volleyball program helped her become more independent and grow as a leader, which she knows will help her while playing in college. Clark has primarily suited up for Bulldogs head coach Meredith Brinkmeyer, who took over in 2017 and has led Notre Dame to an overall record of 39-23-5.

In Clark’s final season of varsity action with the Bulldogs, Notre Dame finished 17-13-1 overall and defeated crosstown rival Jackson 2-0 for the conference tournament title. Clark’s last varsity match was against Ste. Genevieve in the district championship, which the Bulldogs fell in 2-0.

“I have to give a lot of my credit to playing St. Louis club volleyball,” Clark said. “We decided as a family I was going to go up there my sophomore year, and it was seriously the best decision I’ve ever made. It’s called Rockwood, and I love Rockwood so much.

“I feel like it’s a whole different game up there, and they taught me aspects of the game I didn’t even think existed. Those coaches really helped me become the person and player I am today.”

The aspects of the game Clark learned from playing with the Rockwood Thunder Volleyball Club were things like holding other players accountable as well as developing certain skills. “I just got some amazing opportunities like going to nationals and playing some really, really good teams,” Clark said.

Without Clark this fall, Notre Dame still managed to finish with a record 18-10-6 but fell to Jackson in the conference tournament and lost in the district semifinals to Dexter at 2-1.

What Clark is the most excited for about playing at the college level is making new friends on the team by creating a close-knit bond so everyone can have the same mentality on the court.

Her now former teammates is exactly what Clark is going to miss the most about playing volleyball for the Notre Dame Bulldogs.