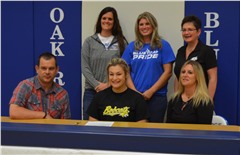 Oak Ridge senior Brittany Showmaker has been playing volleyball ever since fourth grade, and she became the fourth Blue Jay from this year’s team to sign a national letter of intent to continue her career collegiately.

Showmaker helped lead Oak Ridge to an overall record of 23-9-1, which happens to be the most wins ever for the program in a single-season. In her final year as Blue Jay, Showmaker averaged 12.8 kills per game (423 total), along with a serving average of 87 percent. She also accumulated 117 blocks.

“I didn’t want to start playing for college, but it just hit me one day, ‘I’m really going to miss this,’” Showmaker said. “I want to play. This means the world to me — I love volleyball. This is what I want to do.”

The thing Showmaker enjoys the most about playing volleyball is the bond she is able to create with her teammates. Oak Ridge had a total of seven seniors on this year’s team, and Showmaker said it was difficult knowing this was their last year playing together.

“I’ve played with all of those girls since fourth grade, and we were all so close,” Showmaker said. “We went through those spells where we didn’t like each other being teenagers. [This last year] was good.”

Showmaker will continue doing what she loves at Frontier Community College located in Fairfield, Illinois, as she officially signed with the program on May 9. Frontier reached out to Showmaker just a few weeks before she signed, and she noticed it was a small but “good” school.

Showmaker said she is looking forward to getting to know her new teammates, so they can form a bond on and off the court.

This past season was also the final one for Oak Ridge head coach Whitney McFall, who made the decision to step down from the position. Now that she’s not a head coach, this will give McFall plenty of time to watch Showmaker and the other players from this year’s senior class play in college.

The other seniors from Oak Ridge to have signed volleyball scholarships were Mollie and Sophie Thompson and Maggie Howe, who all inked with Stephens College.

“Brittany is a great player — I think she’ll do great in college,” McFall said. “She’s worked really hard this past year. When I got her in junior high, she was a lanky, little girl. Over the years she’s lifted weights and matured in her body. Her willingness to work on and off the court has helped her tremendously.”

McFall stated Showmaker communicates well on the court and goes after the ball, so she is excited to see how Brittany translates to the college level.

McFall emphasized how key of a role Showmaker played in this year’s team winning 23 games by saying sometimes the Blue Jays needed the “Crazy Brittany” to show up.

“When she got a kill — she went to the middle and stomped her feet, raised her arms and congratulated everybody,” McFall said. “Sometimes you needed a little bit of the Crazy Brittany to get the momentum going.”

Showmaker said this persona comes from her love of the game, which drives her to be passionate on the court. Off the court and in the classroom, Showmaker has decided to pursue a career in dentistry.