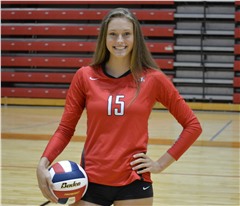 The Jackson volleyball team finally had another team to face
last week at the Event Center as the Indians hosted their annual Gatorade Game,
which featured teams like reigning Class 1 State Champions Advance.

“I was really proud because I felt like we came out and we
looked like a really great program by the way we acted off and on the court,”
Jackson’s third-year head coach Dave Mirly said. “We had enthusiasm, energy and
we communicated. Those are signs of a great program.”

Against Oak Ridge, Coach Mirly felt like his team was a
little slow to start and not quite ready to play since they had several hitting
errors. Once Jackson adjusted, however, he noticed his players minimize those
errors and displayed how good they can be this season as long as they don’t
beat themselves.

Leading the way in the first set against the Blue Jays were
junior hitters Hannah Shinn and Olivia Ward, who each recorded four kills in
the set along with a few blocks.

Shinn went on to record three aces in the first half of the
second set, which is where Jackson went on its 11-0 run. Senior
hitter/defensive specialist Mackenzie Stoner recorded five kills in the set as
four were during the Indians’ scoring run.

Jackson’s defense that features new faces to the back line
like Stoner, fellow senior defensive specialist Piper Guilliams and junior
libero Katelyn Miller came up big against Woodland by not allowing the
Cardinals to score more than 10 points. Junior Riley O’Neal and sophomore Alexa DeLuca also saw time on defense.

“We work so hard at passing — we spend so much time in practice
on passing,” Coach Mirly said. “I really believe tonight you saw who we are.
Miller is gonna be phenomenal back there. Piper and Alexa are going to be great
back there, and what’s great is I’ve got Alexa and Miller for [more seasons].
What Mackenzie did in the back row tonight, that’s who she’s going to be for
the most part. I’m excited about how scrappy we are.”

Offensively against Woodland, Shinn recorded a total of six
kills as she was paced by Ward with four. Sophomore hitter Mia Trankler also recorded
four kills in the match, all coming in the second set.

On top of her defensive duties, Stoner also served for each
point Jackson scored when the team went on its 7-0 run against Woodland.

The Indians final scrimmage of the night against Advance
proved to be a much closer contest than Woodland until the final half of the
second set.

Jackson started the match with a 4-0 run with two kills from
Shinn and another from Stoner. Advance answered after that to make it 5-3, but
the Indians eventually took a 14-8 lead.

The Hornets scored four-straight points of their own to make
it a two-point game until Jackson finally got the game point with an out of
bounds hit by Advance.

The second set was back and forth until the game was tied
5-all, which was when Guilliams went on a serving clinic and finished with a
total of six aces in the set.

“We spend a lot of time practicing serving because we have
to be extremely aggressive in our serves being in Class 4,” Coach Mirly said.
“I really want to be the best serving team in Southeast Missouri to give us a
chance against really good teams. Our serving really kept Woodland and Advance
out of system tonight.”

After winning all three of these matches before the start of
the regular season made Coach Mirly anxious to see how his team performed at
practice the next morning.

“Average and decent teams will come in and kind of go
through the motions after playing really well,” Mirly said. “Great teams are gonna come in fired up and ready to get better at practice.”