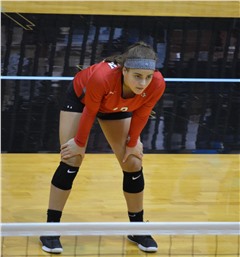 The Jackson volleyball team reached the Class 4 District 1 Championship for a second-straight season last week as the Indians hosted the tournament at the Event Center.

Jackson, the No. 1 seed, faced No. 2 seed and two-time defending champions Farmington in what would be the Indians final match of the season for the title. The Knights were able to defeat Jackson 2-0 (25-23, 25-17) to capture their third-straight district title.

The first set included a total of six ties and five lead changes until Farmington jumped out to a 17-12 lead, thanks to a 5-0 run where Miller recorded three kills and two blocks.

The Indians were able to go on a 4-0 run soon after the five-point deficit to make it a one-point game at 19-18 where senior middle hitter Emily Scott recorded two of her six kills.

Both teams battled back in forth until it was a one-point game once again at 24-23 as a block from junior hitter Mackenzie Stoner followed by a kill from Ward gave Jackson hope. The Knights were able to prevail as outside hitter Jordyn Harris secured the final point with a kill for her team to take set one.

The beginning of the second set saw two ties and two lead changes until Farmington went on another marginal run, this time at 6-0 to take a 9-3 lead. Jackson trailed by as much as seven points throughout the final match as Miller ended the match with a kill.

Broussard and Wilson were both named first team all-district while Shinn was listed to the second team.