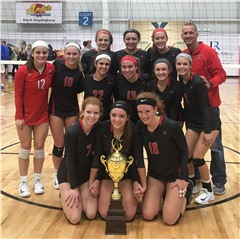 The Jackson volleyball team had fallen to Cape Notre Dame in the two previous matches this season, but the Indians prevailed when it mattered most in the third and final meeting.

The Indians fell to the Bulldogs 2-0 two days prior in round-robin play to determine seeding for Cape to eventually earn the top seed.

“First of all we didn’t beat ourselves, which I felt like we did the first couple of times we played them,” head coach David Mirly said. “[Notre Dame] is so good that you can’t give them any free points, and we didn’t do that much tonight.”

Jackson took a 6-2 lead early in the first set, but the Bulldogs came back to tie the game with a 4-0 run started off by a spike from senior Lexi Welter.

Both teams exchanged points before Notre Dame took a four-point lead to force Jackson to call a timeout.

Notre Dame had to resort to tipping the ball rather than spiking it offensively due to Jackson’s defense ability to block shots throughout the game.

“We’ve spent a lot of time the last two weeks focusing just on blocking with foot work and our timing,” Coach Mirly said. “We definitely needed that tonight, but there were some huge plays where the ball was basically dead, and we popped the ball across the net at least three times.”

In set two, Jackson jumped out to an early lead once again at 9-3 after a seven-point swing, with two points coming from serves.

Coach Mirly said when his team went on a run, Notre Dame did not have the lineup it needed, causing bad passes on serves.

The Indians were up 17-12 when the Bulldogs went on an 8-0 run to lead for the first time in the second set at 20-17, getting a number of their points off serves.

“A lot of it was the serving was strong on both sides, but I really thought [sophomore] Autumn Gragg got served at late in the game. She popped up passes, but [junior] Hannah Wilson was the key. They kept serving to her and serving to her, and she made big pass after big pass down the stretch.”

Starting off with a block by junior Montana Stoner, Jackson went on a 6-0 lead where junior Emily Scott recorded two of her five kills for Jackson to win 25-20.

The third set started like none had in the game as Notre Dame took a 4-0 lead to start, but Jackson fed off an error by Welter to spark a five-point swing to get within one.

The Bulldogs later went on a 5-0 run of their own with four kills, two by senior Hannah Landewe, to extend their lead to 13-8.

“I felt Notre Dame thought they had it won, and we needed to start playing more aggressively,” Coach Mirly said. “Sure enough [Notre Dame] played not to lose and we played to win, so it was kind of a perfect storm down the stretch.”

Jackson went on a five-point swing, thanks to two kills from Stoner off a spike and block, making it a one-point game at 20-19.

The Indians took the lead as they scored three-straight points off spikes, led by senior Olivia Hallet and Scott.
Hallet had a total of eight kills in the final set, scoring two of Jackson’s final three points to win 27-25.

Jackson is the No. 1 seed in this year’s Class 4 District 1 Tournament, and will either face Sikeston or De Soto in the semifinals on Oct. 16.

If the Indians win, they will play for the district championship against either Cape Central, tournament host Farmington or Poplar Bluff.