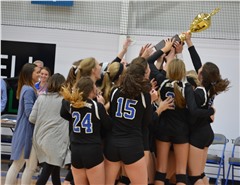 For the fourth year in a row, the Cape Notre Dame and Jackson volleyball teams battled for the annual SEMO Conference Tournament Championship.

Last year, the Indians were able to come away with their first conference tournament title by defeating the Bulldogs 2-1. Jackson was not so lucky last Thursday night.

Notre Dame’s only loss of the tournament came to Jackson in pool play, but the Bulldogs avenged the defeat as well as last year’s championship game by blanking the Indians 2-0 (25-19, 25-23).

This is Notre Dame’s third conference tournament title in the last four years as junior hitter Alexa Clark led the way with a game-high 12 kills and two blocks.

Clark did so while not being in her usual position at inside hitter as Bulldogs Head Coach Meredith Brinkmeyer moved her to outside.

“For most of the season until the conference tournament I had [Clark] playing middle, and we have a freshman on varsity now, and she’s more comfortable in the middle,” Coach Brinkmeyer said. “I said, ‘Hey, Alexa, how do you feel hitting outside?’ She’s like, ‘I’m ready.’ Just to have that positive attitude and have her play wherever I put her — it’s phenomenal. I know she’s worked very, very hard in the offseason to get where she’s at and continue to get better.”

Lexi Rubel is the freshman Coach Brinkmeyer has helping fill the middle along with junior Grace Landewee. The two combined for 10 kills as Landewee finished with a team-high three blocks.

“My two defensive specialists and my libero are all over the place,” Brinkmeyer said. “They’re always making each other work hard. Megan Heisserer can go from corner-to-corner in like a flash, but all three of them were phenomenal tonight.”

Brinkmeyer said that her team was able to win this year’s tournament because of the consistent play it is now displaying on the court like it has in practice all season.

Using momentum from winning the conference tournament, the Bulldogs now hope to capture their first Class 3 District 1 Championship since 2015.

Notre Dame enters as the No. 4 seed and will play Kennett to start. The winner advances to the semifinals to face No. 1 seed Perryville.

“I think [this momentum] is a big thing for us,”  Coach Brinkmeyer said. “I think the girls finally see that, ‘Hey, we can do this.’ We’ve played close with a lot of people and just haven’t quite gone over the edge to win. I’ve told them since day one, ‘Girls, I believe we can win districts. It’s you’ve got to believe in yourself.’ I saw that tonight.”

Jackson Head Coach David Mirly said Notre Dame made things hard for his team by passing the ball well and overall having a solid performance. Mirly thought his team was the opposite by having mental errors but still had a chance to win late in the match.

“I know the first set we didn’t, but if we don’t miss our last three serves, anything could’ve happened,” Coach Mirly said. “Most of it was Notre Dame just playing really, really well tonight.”

Jackson sophomore hitters Hannah Shinn and Olivia Ward combined for 15 of the team’s 26 kills as the team finished with an overall .229 kill percentage to Notre Dame’s .267. Senior libero Hannah Wilson came up with 19 of the team’s 38 digs as junior Piper Guilliams was behind her with six.

Jackson earned the No. 1 seed in bracket play by going undefeated in pool play and did not lose a set. This was the case until the Indians faced No. 3 seed Poplar Bluff in the semifinals.

Heading into the Class 4 District 1 Tournament, Jackson is the top seed and will either play No. 4 Poplar Bluff or No. 5 Cape Central in the semifinals tonight at 5 p.m.