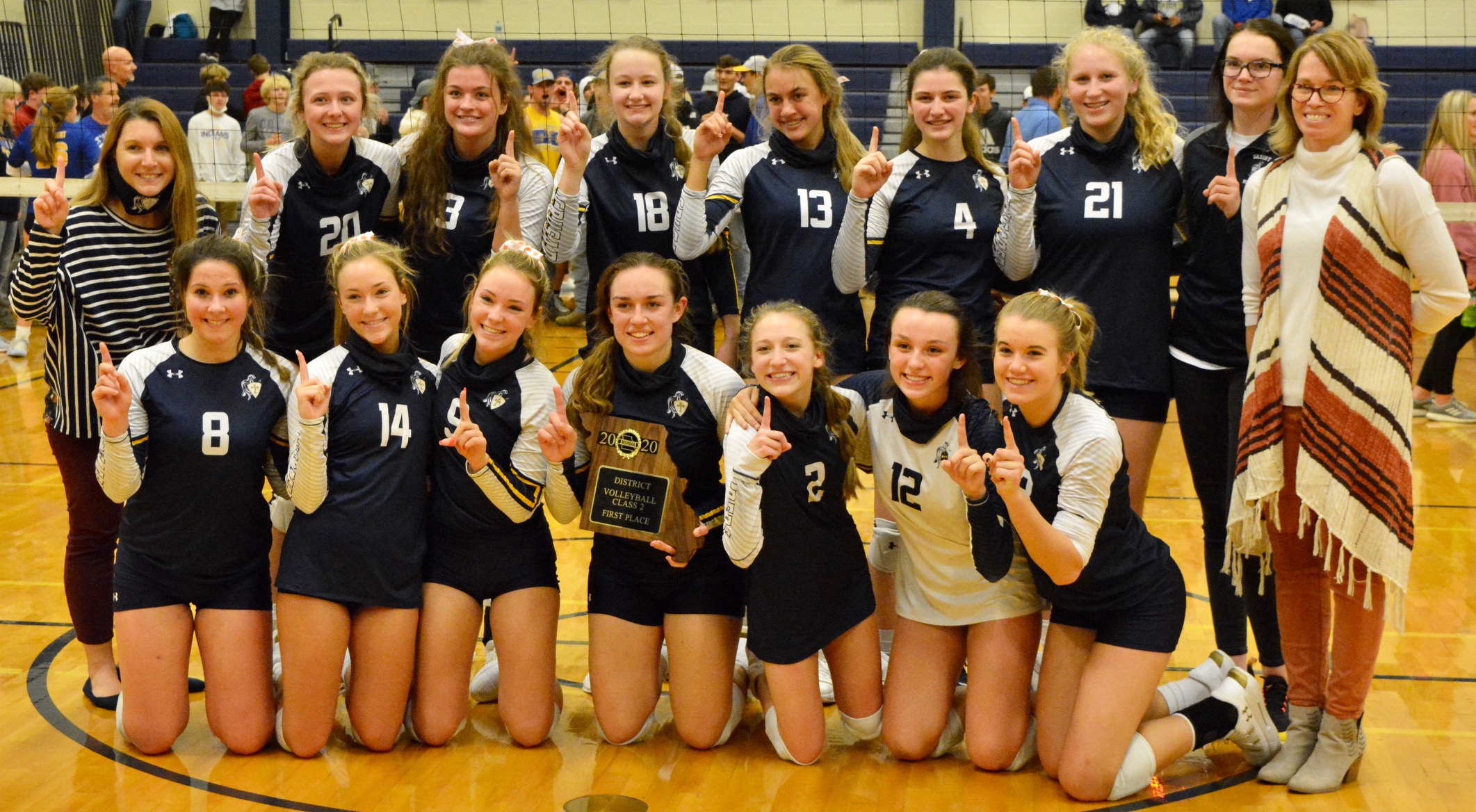 Heading into this season, the Saxony Lutheran volleyball team had never won a district championship despite reaching the title game for the past three seasons in a row.

“This team is such a family, and they keep working hard — They just don’t give up,” Saxony head coach Emily Wahlers said. “We worked really hard trying to stay mentally focused, and we came out a little too relaxed. But then we found our groove, and we did it.”

The Crusaders were led by none other than their top-two scorers in outside hitters senior Abbi Thomason and junior Lauren Barnes, who combined for 25 kills as Lauren had 13 and Abbi 12 in their team’s win over the Indians.

Barnes and Thomason also made an impact on defensive as Lauren finished with a team-high 21 digs, while Abbi paced her with 12. Finishing second in digs was none other than sophomore libero Anna Mueller, who recorded 19 digs while also having seven assists.

The Crusaders almost lost their top defender Mueller in the contest to a head injury after she took a hard fall to the ground after pursuing the ball near the sideline. Mueller was face first on the ground motionless for a few seconds, but she was eventually helped off the court and reentered the game a few plays later.

“Anna is a trooper — she’s willing to do whatever it takes,” Coach Wahlers said. “She’s a hard worker, and my middle backs that are also my outside hitters make good reads on hitters. [My defenders] can pretty well pick up just about anything.”

Thomason is the lone senior on Saxony’s roster this year, who has described herself as the “natural mom” of this team that has a family-like bond — one that helped lead these Crusaders to their best finish in program history.

“Right now, I’m absolutely in shock, like, no emotions yet,” Thomason said following the win. “I’m just like, “Ah!” This is a great group of girls, and it’s a great organization. I’m so excited for them next year, too, because there’s a lot of juniors that’ll be seniors.”

In the district final, Summers finished third in kills behind Barnes and Thomason with seven of her own. Tying for the fourth-most kills were the likes of Deckerd and Thomason as they each recorded six.

“I have so many hitters, and good hitters,” Coach Wahlers said. “Yeah, we set Abbi and Lauren more than the rest, but I still have middle and rightside hitters that can put it away just like they can. It doesn’t matter if [Barnes and Thomason] aren’t hitting, somebody else is going to.”

Setting the ball to Saxony’s array of hitters was none other than Lohmann and Voelker, who tied for a team-high 19 assists. Voelker and Lohmann also contributed on defense with 16 and nine digs, respectively.

Winning a district title advanced the Crusaders to their first-ever sectional matchup, where they faced and hosted Malden on Saturday. Saxony made quick work of the Green Wave by winning 3-0 (25-17, 25-8, 25-15) to reach the quarterfinals and be one of the last eight teams in Class 2 playing.

In the win over Malden, Barnes finished with a team-high 10 kills as Anna Thomason paced her with five of her own.

“Malden was not like a season game because we play such tough teams, but they were still hitting, and we had to move and play smart,” Wahlers said. “They had five people on defense, so they only had one blocker, which made us really have to aim for our spots.”

The Crusaders final game of their historic campaign would be in the quarterfinals against Valle Catholic later that day. The Warriors handed Saxony a 3-0 loss (12-25, 22-25, 17-25) as Barnes led the team with nine kills, while Abbi Thomason paced her with seven in her final game.

“[Finishing as one of the top eight teams in Class 2] felt like a miracle or a blessing,” Wahlers said. “I don’t know which it could be — maybe both. I came into this year determined we were going to make some changes and really let people know Saxony volleyball is here.

“We wanted to make some big splashes in this small swimming pool, and I think we’ve done that. We have a very tough season and play tough teams so we can get to this. It’s only up from here.”