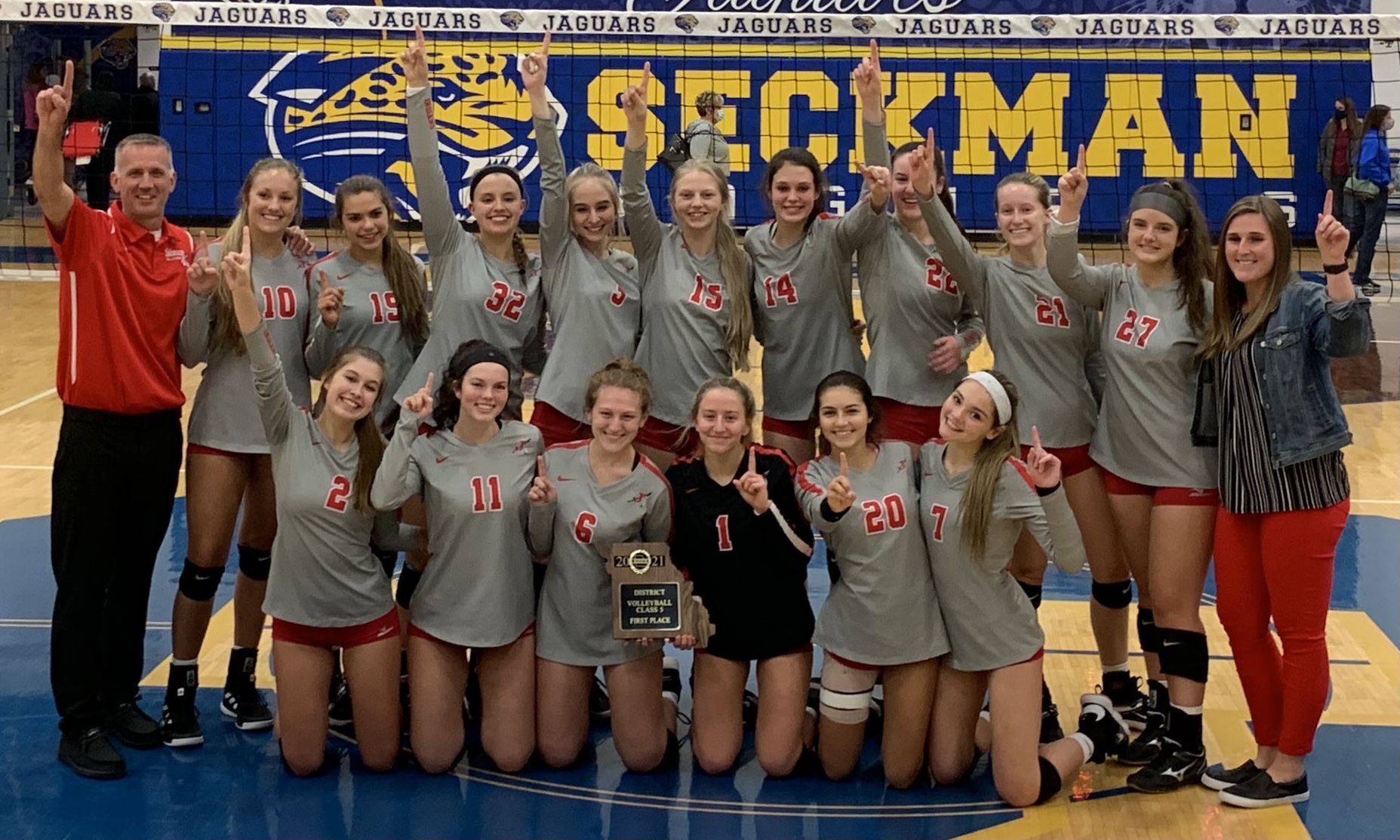 Last week, not only did the Jackson volleyball team secure its second-straight 30-win season, but more importantly the Indians won their third Class 5 District 1 Championship in a row.

Jackson (30-6-3) accomplished this with a 3-0 sweep (25-19, 25-12, 25-20) of Northwest (26-6-3), which actually earned the No. 1 seed in this year’s district tournament. This was the Indians 11th-consecutive win after claiming their third-straight SEMO Conference Tournament Championship by beating rival Notre Dame Oct. 19 to close the regular season.

“We had so much to play for with the conference and district tournament. They just wanted to win, and they were willing to do whatever it took to get there,” Jackson head coach Dave Mirly said. “That conference tournament was something we wanted to win so badly.

“We lost to Notre Dame in September, and we had to wait four or five weeks to play them again. They were hungry and heard it from me a whole bunch about how Notre Dame beat us. … We carried that momentum right into districts.”

With the Indians being seeded No. 2 overall behind Northwest, they — and especially senior middle hitter Mia Trankler — were out to prove these seedings wrong.

Trankler had arguably the best game of her high school career by leading the game in kills and blocks with 18 and eight, respectively. She will officially sign with John A. Logan Community College on Nov. 15 to continue her playing career.

“[Trankler] wanted to win so badly down the stretch, as did Alexa Deluca. She really carried us because we normally don’t rely on one hitter with as many great hitters as we have,” Coach Mirly said. “Kamryn [Link] saw that [Northwest’s middle hitter] couldn’t stop Mia, so our passing was just wonderful and continued to set her most of the time.

“We just took advantage of that situation we had there, and Mia was ready for that challenge. She loves that moment, and she made the absolute best of it.”

Pacing Trankler in kills were young gun, outside hitters sophomore Nadia Wasilewski and freshman Katy St. John, who finished with 10 and nine kills, respectively. Both also had a block.

“The other team just couldn’t focus on one player. There were games where Nadia just carried us especially against Ste. Genevieve and Dexter,” Coach Mirly said. “It was late in the games where we’d just set her every single time. … Katy St. John has been a beast for us in so many games this year.

“Then Christa is always right there. She doesn’t get set as much as the rest of them, but her kill percentage is really high because when she does get set, she makes the best of it.

“Probably the best thing was they all bought in to the team concept of, ‘Hey, I may not get set as much this night. That’s OK. If my number calls, I’ll be ready for it, and I’m not going to complain about not getting set.’”

Also playing a pivotal role in the district title win was junior setter Kamryn Link as she not only recorded a game-high 38 assists, but she also finished second overall in blocks behind Trankler with four.

Moving back to the defense, Jackson had eight players record multiple digs as sophomore libero Holland Guilliams led the way with 13. Coming in second behind her was senior defensive specialist Alexa Deluca with 11 digs, while sophomore middle hitter Christa Vand-even had eight. Vandeven also had one along with her three kills.

“I can’t say enough about Alexa Deluca. She has come so far, and she did a good job for us last year,” Coach Mirly said. “This year, she was just consistent the entire season long. Her serve receive, defense and passing were phenomenal. She’s just a great leader on the court.”

Only one player for Northwest had seven or more kills in sophomore Haley Yount with 10 as she was also the only Lion to have a higher hitting percentage than .154 at .318. Northwest only tallied three blocks, while senior Torie Strange finished as her team’s only player with double-digit digs (11).

St. John led the game in kills with 15 as Trankler produced the second most for the Indians with seven, while no other hitter for Jackson had more than four. Cor Jesu had a spread offensive attack as five different players had six or more kills.

Vandeven had five blocks as Trankler and St. John each had two for the Indians, while Cor Jesu senior Gretchen Olson had a game-high six blocks. Olson was also one of the six players for Cor Jesu with six or more kills (six).

“We had a little team meeting about three weeks ago. We had some great strengths that were making us really good this year, and we had some weaknesses that were causing us to be inconsistent,” Mirly said. “After that meeting, we didn’t lose another set until the sectional game.

That was a testament to how much this team grew and how bad they wanted to win down the stretch.”