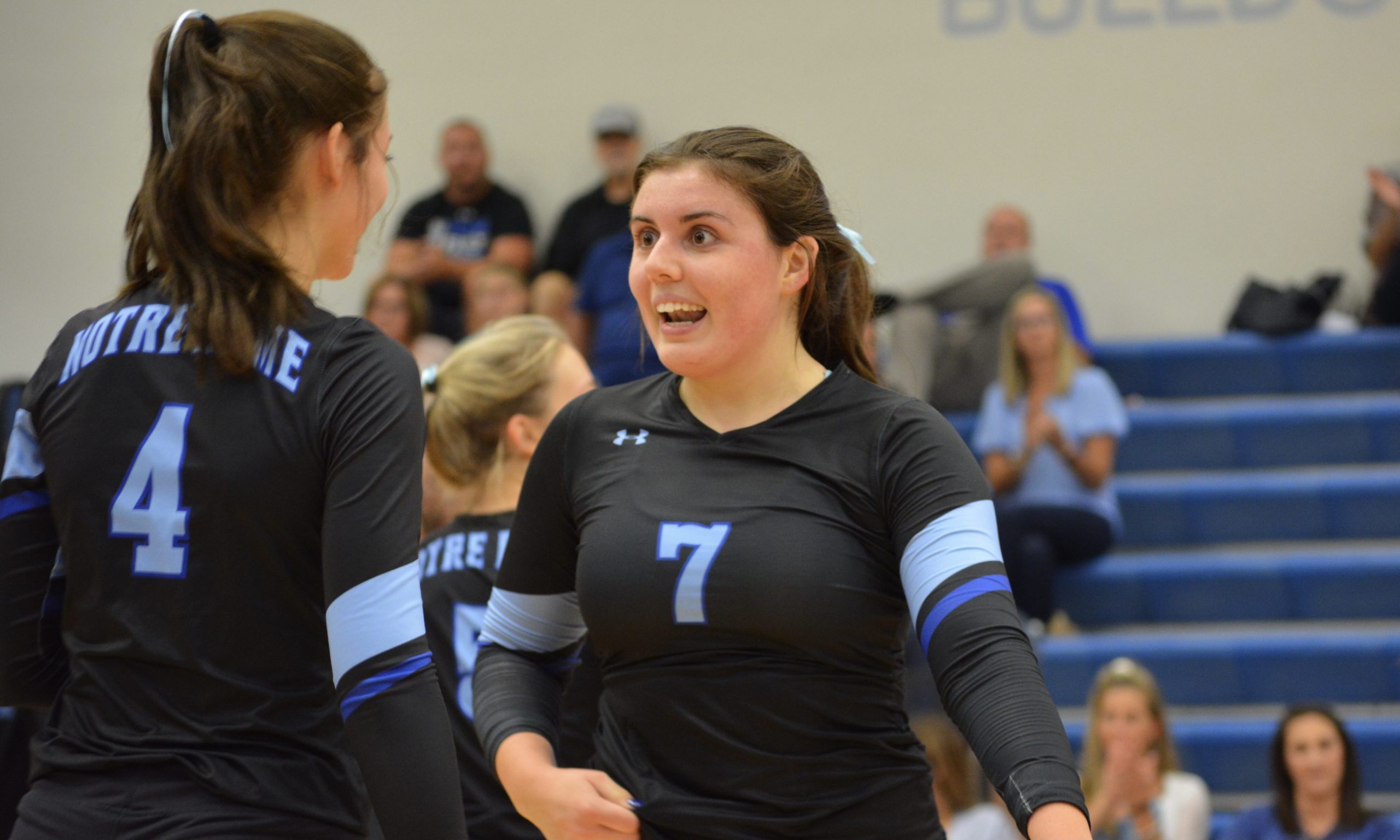 Jones also had a team-high three aces, while McClin-tock, senior setter Sarah Brennan and junior outside hitter Kristin Anderson each had two aces of their own.

The Bulldogs head coach Meridith Brinkmeyer admitted that she forgot to tell her team they had won the conference regular-season title after the game. This wasn’t because it wasn’t a significant feat for Notre Dame, but instead because Brinkmeyer is focused so much on each individual game.

“[Winning the conference regular-season title] is good, but I just get lost in the game sometimes,” Coach Brink-meyer laughed. “That’s exciting, though, because the girls have worked hard for me this season, and they deserve it. Now I’ll have to send out a reminder message.”

This was the 13th game McClintock has recorded double-digit kills (team-high) and fourth against conference opponents. Rylee has a team-high 288 kills this season as her single-game high is 21 and had the most against a conference opponent when she produced 17 in a 3-2 win over Jackson last month.

“[McClintock] knows right when to tip over the block and make them play true defense,” Brinkmeyer said. “The seniors are a great group of girls, and they’re good friends. The chemistry and fun they have together — they’re all competitive, so at practice they want to win everything. It’s fun because they bring that energy and have the same goal in mind.”

Rubel, who has a team-high .414 hitting percentage along with 220 kills, has recorded the second-most, double-digit kill outings with eight. Lexi’s season-high kill total is 18, which she had in a 3-1 win versus Perryville.

Even though Notre Dame defeated Cape Central han-dedly, the Tigers managed to take early leads over the Bulldogs in the second and third set. However, Notre Dame went on 6-0 runs each set to take back the lead and win in commanding fashion.

One of the reasons why the Bulldogs are able to rally back is because of how well they adapt on the fly defensively. Six players for Notre Dame recorded seven or more digs against Cape Central as junior defensive specialist Anna Garner produced double-digit digs as well with 10 to pace McClintock and Greaser’s total of 13.

McClintock leads all Bulldogs in digs with 342 as Greaser is second behind her at 289, while Anderson and Brennan also have 250-plus digs with 271 and 265, respectively.

The Bulldogs four-year starter McClintock also tallied a block in the game as did fellow senior outside hitter Shelby Renner and junior middle hitter Tori Rubel, who is second on Notre Dame in total blocks with 54 behind her sister Lexi (60). The Twin Towers have combined for 114 blocks so far this fall.

Lexi Rubel leads the Bulldogs in multiple-block games with 13 as she’s recorded five or more on five occasions with her season-high being seven, which was in the season opener at Farmington.

Tori Rubel paces Lexi with 12 multiple-block outings, and she’s recorded the most single-game blocks for the Bulldogs with nine (sixth most in MSHSAA history), which came against Jackson.

Notre Dame hopes to make history a few more times this season as the Bulldogs will go for their first Class 3 District 1 Championship in six years next week.